Advanced bogie keeps LRVs ahead of the curve 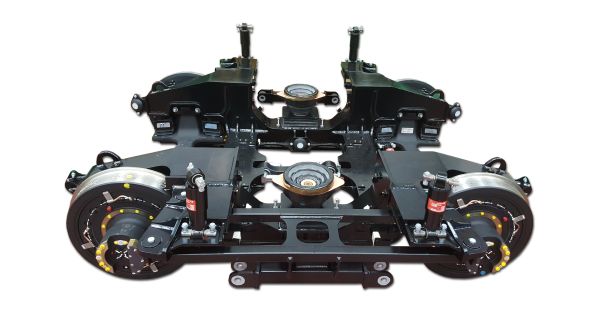 TESTING is underway in Korea with a radical design of bogie which can cope with curves as sharp as 15m while reducing track forces by more than 30%. Although Hyundai Rotem has not yet decided which type of rail vehicle will use the new bogie, an obvious application is low-floor LRVs for networks with or contemplating small-radius curves.

The technology for the new bogie was developed following five years of research as part of Korea’s so-called Near-Surface Urban Railway National Research Project which was organised by the Korea Railroad Research Institute (KRRI), the Korean Agency for Infrastructure Technology Advancement, under a research programme by the Ministry of Land, Infrastructure and Transport. As the manager of the research project, Hyundai Rotem was responsible for developing the improved bogie technology for use on tight curves for urban railways.

While it is generally known that the angle of attack can be reduced by applying steering mechanisms when travelling through tight curves using rolling stock with independently-rotating wheels (IRW), the effect on the reduction of track forces through steering is not as high. Individual torque control (ITC), hydraulic steering-cylinder control (HSC) and individual wheel braking control (IBC) employ a method that reduces track forces by producing a yaw moment and decreasing the flange contact force of the front wheels on the outside of the curve.

In the case of ITC, after detecting the train’s location, the speed difference between the wheels on the inside and outside of the curve is decided based on information for each curve, combined with the current speed of the vehicle. In order to generate the relevant difference in speed, the bogie produces a yaw moment according to the individual motor torque applied to the left and right motors. At this moment, the contact force on the outer wheels at the front of the vehicle and the interior wheels at the back decreases, reducing lateral forces, wheel noise and wear.

The effect of the running gear through a sharp curve on the reduction of track force and wear while a control algorithm is applied and has been verified several times through dynamic analysis. However, before applying it on actual rolling stock, hardware-in-the-loop simulation (Hils) was used to confirm actual motor and steering cylinder control and functionality.

Using Hils, it is possible to derive an optimal control algorithm under normal conditions and improve the safety of test vehicles before live tests are carried out. This is because it is possible to test abnormalities in a safe, controlled environment while taking into account various failure conditions. The biggest advantage of Hils is that it is possible for testers to carry out a variety of tests, as often as they like, without any time or space constraints. Actual running tests come with several limitations and dangers, but with Hils, testing conditions can be reset at the push of a button.

HSC, a system that uses steering bogie technology, introduces delayed and individual steering concepts to eliminate the problem of reverse steering at the rear axle that is caused by the existing bogie trying to steer both wheelsets symmetrically. In addition, a system capable of steering without a separate sensor, controller or external power source was designed by using the inter-vehicle joint cylinder, and when an active powerpack is used, control can be carried out using joint cylinder and car information.

There are five modes, and on each curve the system actively steers the wheelset to match the bend of the carbody joint based on the wheel rotation and information about the vehicle’s position and speed, as well as the track curve. As HSC uses active steering technology, a great improvement can be observed on solid-axle rolling stock, while the effect on independent-drive axles is not very significant.

ITC is a leading technology that converts the disadvantages of individual-drive rolling stock into advantages. After receiving curve data as well as the position and speed of the vehicle, the controller determines the difference in the number of rotations of the left and right motors, and then transmits the command to the controller. As the left and right motors perform individual motor torque control to generate the speed difference, a yaw moment occurs in the bogie, and lateral force decreases as the flange contact force of the front-outer wheel is reduced.

ITC’s main advantage is not the steering system, such as that used in HSC, but that it can be applied easily by modifying the controller of the existing motor, without adding additional sensors or actuators. However, improvements still need to be made to technologies that detect both curve data and the accurate positioning of the car.

IBC technology generates a yaw moment on the bogie through individual operation of the brake system installed individually on the left and right wheels, thereby reducing lateral force and flange contact force on the inner rear wheels and the outer front wheels. IBC control technology has basically the same configuration as ITC control technology. Based on the position and speed information of the vehicle, braking force is applied to the faster wheel in order to eliminate the difference in speed between the left and right wheels, thereby inducing the same behaviour as a solid axle, causing lateral stability and improving safety.

When traversing sharp curves, after determining the braking force and difference in speed between the left and right wheels, a yaw moment is generated on the bogie by applying the brakes to the inner wheels. When the bogie rotates inside the curve radius, the lateral force decreases as the flange contact force of the front outer wheels and rear inner wheels is reduced.

With control, track forces can be decreased by 30%, while noise can be reduced by more than 3dB. As a result, a 30% improvement in wear as well as maintenance cost savings are expected. Domestically, wheel maintenance costs should be reduced by $US 80 per car while rolling stock availability should increase by 0.5%. There should also be a reduction in the cost of rail maintenance and less need for noise-reduction methods such as installing noise barriers or insulation.

We are looking at tram routes planned at 10 locations in Korea and we are currently in negotiation with KRRI to select and carry out a trial project at one of these locations. As far as overseas projects are concerned, we are interested in carrying out limited trials if we receive requests for the technology.