All aboard for Europe’s Rail

A proposal to establish Europe’s Rail as the successor to the Shift2Rail research programme was confirmed in February. Shift2Rail executive director, Carlo Borghini, reveals what Europe’s Rail will entail and his hopes and expectations for the new €1.2bn programme to Kevin Smith. 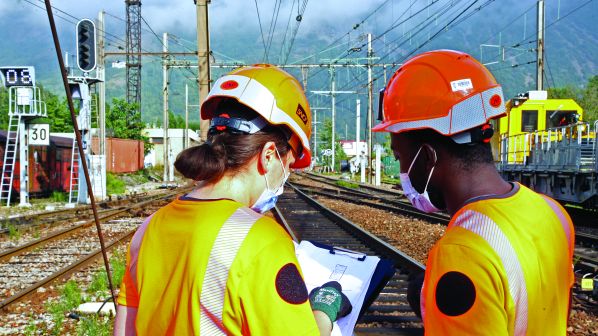 Installation and control of road signs at Saint-Jean-de-Maurienne station.

FOLLOWING around 18 months of negotiations, Mr Carlo Borghini and his team at Shift2Rail received some very welcome news on February 23: confirmation of a proposal to extend the joint undertaking for a second programme.

The European Commission (EC) confirmed the proposal to establish Shift2Rail’s successor, Europe’s Rail, as one of 10 European Partnerships under the Horizon Europe research initiative between the European Union, member states, and/or industry. The EU will provide nearly €10bn of funding for the joint undertakings that the partners will match with at least an equivalent amount of investment.

For Europe’s Rail, the EU is committing €600m of which €526m is for research and innovation activities, €24m is for running costs and €50m for a ‘system pillar.’ Industry is expected to match this funding, including €24m for administration costs, taking the total budget to €1.2bn.

While this is less than was hoped - €1.5bn was regularly cited as a target during negotiations - Borghini, who is Shift2Rail’s executive director, is keen to stress that the EU’s contribution is around a 50% increase compared with Shift2Rail, which if Britain’s €40m contribution is discounted, had a €410m budget.

“€600m and a 50% increase is a major signal,” Borghini says. “We are the joint undertaking with the largest budget increase and this is a really important message to the sector. It is a result of the sector’s work in Shift2Rail and the integration of other activities that show we are able to invest the money effectively.

Budget is not the only area where Europe’s Rail will diverge from its predecessor. Borghini says the name change is not by chance but emphasises that Europe’s Rail is an entirely new programme, not simply a continuation. A new organisation will be established to take over the work of Shift2Rail. Europe’s Rail will also be structured around two guiding pillars: a systems pillar and an innovation pillar, which is likely to include larger projects than Shift2Rail with the prospect of running smaller subprojects where appropriate.

“What we learned from Shift2Rail is that it is not sufficient to just look at rail research innovation,” Borghini says. “You need to do the full lifecycle, including the future concept for operation and the functional system architecture; not what the system will look like but how the operators intend to run services in order to meet the client expectations.

“Do we continue to operate in the same manner if we have satellite positioning, 5G and automation? What is the business model behind this? These will be the key elements and the innovation pillar will be the answer.”

“What we learned from Shift2Rail is that it is not sufficient to just look at rail research innovation.”

Borghini adds that the objective of the system pillar is to go beyond the immediate membership to attract the complete European sector. The commission and the executive directors of Europe’s Rail and the European Union Agency of Railways (ERA) will chair the system pillar’s steering group, which will also be made up of representatives from various industry associations.

Borghini says work will take place to reduce the administrative burden of the programme, which was one of the struggles experienced with Shift2Rail, potentially by accessing EU Lump Sum pilot grants. In addition, a Deployment Coordination Group will advise the governing board on how to bring innovations to market and for coordinated deployment of new technologies.

“The Deployment Coordination Group can be a major opportunity for the sector, including bringing forward a system business case to explain present and future funding needs - whether they are regional, national, European or a combination - to accelerate the transformation of rail,” Borghini says.

In addition, the guiding legislation is the EC’s Sustainable and Smart Mobility Strategy, which was announced on December 9. The strategy sets out targets for Europe’s transport system to become more digitalised and environmentally friendly as well as more resilient to future crises, helping to cut emissions by 90% by 2050 and achieving the targets of the European Green Deal. Among the specific goals for rail are doubling high-speed rail traffic by 2030 as the continent strives for all journeys of less than 500km to be carbon neutral by 2030 and increasing rail freight by 50% of current levels by 2030 and 100% by 2050.

With this in mind, Borghini says it is critical that Europe’s Rail produces results that are ready for industry deployment by the mid-term point of the programme. “All the results from Shift2Rail are in two upcoming concrete demonstrators in 2021 and 2022,” he says.

“For Europe’s Rail we want to see clear results within four years. If we take ATO, it will mean that ATO GoA 3 will be in 2024 and GoA 4 will be in 2025 or 2026. For those who want to deploy these solutions, they can do so if the regulatory framework is in place and then scale up from one to the other solution as it matures. The idea is to create a short-term impact from quick wins but with a long-term vision of the direction we want to go.”

There are 26 founding members of Europe’s Rail (see panel). This compares with eight plus the EU for Shift2Rail, which were subsequently joined by 60 associate members either directly or via connected consortia and associations.

“I think we may have underestimated the capacity of the sector, a sector that is clearly technology driven, but maybe less known than others for its capacity for innovation.”

Reflecting on the founders, Borghini says the programme has achieved the objective to broaden the scope of the membership to include railways and manufacturers from Italy and Spain, which he felt were under-represented in Shift2Rail.

“I am really happy about this,” Borghini says. “We are running a programme that is covering the full lifecycle of research innovation and it is much easier for a supplier or manufacturer of components whether it is Voestalpine on the infrastructure side, or Hitachi working on systems, to have their main clients onboard. If we integrate and combine all of these together, we have the opportunity to accelerate towards market uptake.”
Borghini says upcoming meetings with the founding members will lay the groundwork for the start of the programme. Many suppliers that are participants are also members of the European Rail Industry Association (Unife). Mr Philippe Citroën, Unife’s director general and a passionate supporter of Shift2Rail, says it is heartening to see such strong backing for Europe’s Rail in the context of the coronavirus pandemic, which has been testing for the entire sector.

“I really think that Europe’s Rail is a valuable asset in setting the priorities for the sector and for establishing institutional partnerships in this process as we attempt to maintain European technological leadership, which is essential for the European rail supply industry,” Citroën says.

Citroën adds that it is encouraging that non-EU member states are looking at how they can join and contribute. This includes Switzerland as well as Britain. Network Rail was a founding member of Shift2Rail and Borghini says it is one of the prospective members awaiting an agreement with the EU for associate countries to join the Horizon Europe programme.

Regions where Borghini feels Europe’s Rail does not quite reach include the Baltics and some countries in eastern Europe as well as urban rail transport in general. Wiener Linien was involved in Shift2Rail but no transit authorities are included in Europe’s Rail’s founding membership. Borghini says he hopes the founding members’ relationships will help to bridge this gap as well as with rail freight operators, which are also not directly represented. He adds that other membership types are possible, including associate members and contributing partners. However, these will have to be formulated once the legal framework for Europe’s Rail is finalised.

This process will proceed in 2021. While the Portuguese presidency hoped to pass the regulation during their remit, which will end on June 30, Borghini expects adoption of the Europe’s Rail regulation in the second half of the year during the Slovenian presidency due to the legal complexity for the 10 Horizon Europe partnerships.

Europe’s Rail will initially run in parallel with Shift2Rail. Shift2Rail projects are scheduled to end by the end of 2022, but Borghini says to account for delays caused by the pandemic, they will likely run into 2023. The programme itself will conclude in 2024. “There will be one year of overlap so that the teams can transfer from the projects that will be finishing to the new projects,” Borghini says.

“The idea is to create short-term impact from quick wins but with long-term vision.”

Shift2Rail has transformed European railway research since it began work in 2016. It fostered a cross-industry collaboration between railways, infrastructure managers and operators, the supply industry, research institutes and universities unlike anything that had come previously.

Among the project successes is the development of a digital automatic coupler, which has huge potential to improve operational efficiency for rail freight operators. Tests of revolutionary ticketing programmes, the use of new sustainable gases in HVAC systems, and SIL 4 braking systems are other notable success stories.

However, the major success of the programme for Borghini is the integration of various results into the EU’s Control and Command Signalling Technical Specifications for Interoperability (CCS TSI), which is due to be updated in 2022-23 and specifically rules relating to ATO, including continuous positioning via satellites and telecommunications regarding the Future Railway Mobile Communications System (FRMCS), a project which is led by the International Union of Railways (UIC). “This is a sign of the impact of research innovation because it will support bringing solutions to the market,” Borghini says.

As the focus increasingly shifts to Europe’s Rail, Borghini says he is excited by opportunities for rail researchers to work with other Horizon Europe programmes to harness their technology in a rail setting. Projects in 5G, hydrogen fuel cells and urban mobility are all candidates for integration. Research initiated in Europe’s Rail could also expand to national rail research projects, including system demonstrators or preparatory activities for deployment. Indeed, this might be one way of maximising the available funding for the programme.

Borghini says Shift2Rail’s impact on railway research is testament to a sector that has risen to the challenge. Rail traditionally has had a reputation as a slow innovator but Borghini believes the evidence of the last five years or so shows that this is no longer the case.

“I think we may have underestimated the capacity of the sector,” he says. “A sector that is clearly technology driven, but maybe less known than others for its capacity for innovation… but now we are working at a speed that is comparable with other sectors.”

Crucially, Shift2Rail is supporting the EU’s work to overcome another traditional Achille’s heel for European rail - a lack of interoperability between national networks. The Fourth Railway Package provides the legal framework while the upcoming revision to the TEN-T directive will further reinforce the objectives of the Sustainable and Smart Mobility Strategy as a legislative priority. Europe’s Rail is set to play a key role in supplying new generations of technology that will make a meaningful shift to rail feasible by the end of the decade. It’s an exciting prospect for European rail researchers.

“The market and technological pillar are already providing the strong legal basis for this,” Borghini says. “Now our duty is to ensure that new technologies are designed in this manner.”