Developed at a cost of €340m, the Avelia Horizon will form the next generation of high-speed rolling stock in France. Robert Preston reports on how manufacturer Alstom has worked to reduce the total cost of ownership for operators while improving passenger comfort and environmental performance. 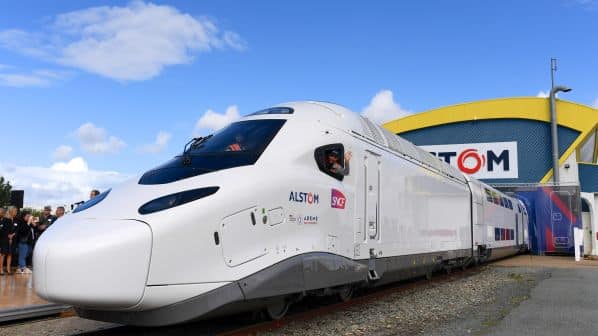 The first Avelia Horizon train is due to leave the Alstom plant in La Rochelle, France, this month. Photo: Alstom/Olivier Schindler

FOLLOWING its rollout in September and the completion of static testing, the first Avelia Horizon train is due to leave the Alstom plant in La Rochelle, France, this month to make its way to the test circuit at Velim in the Czech Republic for dynamic testing to begin. Under an extensive programme of approvals testing, the new train will begin dynamic trials on French National Railways (SNCF) infrastructure in spring 2023, with Alstom committed to completing the approvals process in time for the Avelia Horizon to enter service with SNCF as the TGV M by the end of 2024.

SNCF awarded Alstom a framework agreement to supply up to 200 high-speed trains, and in July 2018 placed an initial €2.7bn order for 100 dual-voltage trains for domestic services. In August SNCF exercised a €590m option for 15 four-voltage trains for international services. The 350km/h Avelia Horizon was developed by Alstom and SNCF working together in an innovation partnership that started in 2017-18, and as Mr Laurent Jarsalle, vice-president, high-speed platform at Alstom reports, it took 18 months for the manufacturer and the operator to arrive at an optimum design meeting their respective objectives.

“SNCF was looking to meet the same goal as us, which is to lower the total cost of ownership per seat.”

Alstom’s thinking on what high-speed operators would want from their rolling stock in the future had been guided by this concept since 2015-16, looking to reduce the total cost of ownership (TCO) per seat while at the same time offering a more flexible interior that could be changed to meet different passenger needs over the 30-year life of a high-speed train.

The Avelia Horizon offers a 30% reduction in TCO per seat and a 20% increase in capacity compared with recent builds of double-deck TGVs for SNCF. It retains the format of twin power cars at either end of a formation of articulated coaches, but train capacity has been increased by shortening the power cars by 4m and the coaches by 1m. This enables a ninth passenger car to be added to offer more seats with an overall increase in train length to 202m compared with a 200m Euroduplex. The Avelia Horizon has between 640 and 650 seats per train, with 20% first class seating. Removing the bar area and installing only second class seating would enable up to 740 seats to be offered in a nine-car train, and the Avelia Horizon will also be available in seven and eight-car “scalable” formations.

Within the shorter coaches, passenger capacity has been increased by moving the auxiliary equipment previously housed on the lower floor of the bar car to the power cars. As already mentioned, the power cars are themselves 4m shorter than previous designs, but as Jarsalle explains, sufficient space for the auxiliary equipment was found by moving the main transformer beneath the underframe. The Avelia Horizon has a power rating of 8MW.

The new high-speed train retains the asynchronous traction motors of its predecessors, but unlike previous builds of TGV power cars, they are now mounted directly on the bogies. Central to reducing the axleload of the TGV was the use of body-mounted traction motors, connected to a gearbox on each axle by a cardan shaft. Removing the cardan shafts has reduced the maintenance costs of the Avelia Horizon, which Alstom says are 20% lower than previous builds, and reflects the central focus in design work on reducing TCO. “We even chose some items that were more costly to install, but cheaper to maintain,” Jarsalle says.

The power cars also feature a revised nose design that is the fruit of work to optimise the aerodynamic performance of the Avelia Horizon. This has also included reducing air gaps between the cars and around bogies and pantographs to improve the train’s air resistance. This has enabled a 20% reduction in energy consumption, which when coupled with the train’s high passenger capacity has a significant impact on TCO per seat. Significant attention was also paid to the layout of the driver’s cab, developed in consultation with drivers to provide a comfortable working environment with all controls within easy reach. “We did a considerable amount of work to provide first class comfort for the driver,” Jarsalle says.

To be more responsive to changing passenger and operator needs, the interiors of the Avelia Horizon are modular and flexible, and have been designed so that the configuration can be changed easily. Changing from first to second class seating would require only a day or two in the workshop, as Jarsalle explains, as the seats are mounted on rails which also enables the seat pitch to be modified.

Toilet and luggage rack modules can be installed as required, and the two decks in each coach of a nine-car train offer the potential for 18 different travelling environments. An “extra comfort zone” with panoramic windows might be installed on the upper deck, while the lower deck with no inter-car gangways and no passengers passing through might suit itself to a meeting room for business travellers or a children’s area.

Work to cut maintenance costs has included simplifying the air-conditioning system. Where previous builds of double-deck TGV had one air-conditioning unit for each deck, there is now just one per car. The Avelia Horizon has been designed for condition-based maintenance from the start, with sensors embedded in onboard equipment to provide real-time data on condition and performance. This will enable operators to maintain their fleet on a train-by-train basis, performing preventative maintenance only when needed as a component or system approaches failure to optimise maintenance costs.

Trains will transmit condition data every five seconds, with each train transmitting 15GB a day. Passengers should also enjoy full internet connectivity, despite the difficulty of predicting what their digital use and data requirements will be in five, 10 or 15 years’ time. “We expect that everyone onboard will be able to stream a film at the same time,” Jarsalle says. “We have anticipated that.”

Investing for the future

Development of the Avelia Horizon has cost €340m, co-funded by the French government’s green development agency Ademe, which formed the Speedinnov joint venture with Alstom in 2015 to develop the new high-speed train, partly with an eye to its export potential. Capital expenditure has included €50m to establish two new production lines at Alstom’s La Rochelle plant, one to produce aluminium coach bodyshells and the second to fit them out. New tooling, a new regime for delivering parts to the factory floor and more compact facilities are expected to result in smoother, more efficient manufacturing with a higher throughput. Health and safety improvements were also made. “We need to pay attention to our people,” Jarsalle says.

What Jarsalle describes as the “huge investment” of €50m made in La Rochelle should be justified by winning the framework agreement that could see SNCF ordering up to 200 high-speed trains over a period of 10 to 15 years. But he also reports interest from other high-speed operators, both established and new entrants. “There is an appetite in the high-speed market,” he says. “We are confident that this solution will find its market.”