Reducing journey times to less than an hour between each of the three major cities of the Pacific Northwest is the goal for Washington State Department of Transportation (WSDOT). But as Richard Clinnick reports, a lot of decisions are still required to meet the publicised deadlines for the Cascadia high-speed project. 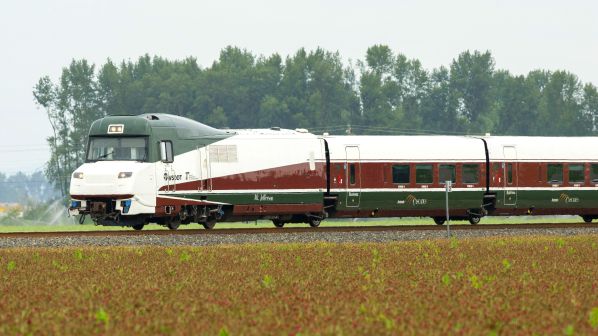 The project aims to make passenger rail services more competitive with other transport modes such as road and air. Photo: Amtrak

THE Covid-19 pandemic has not dampened the desire to improve rail connections between cities and countries across the world, and that is certainly true for the United States.

Perhaps there is renewed optimism following the election of Mr Joe Biden as president whose passion for rail is well-known. But even without Biden’s enthusiasm for the iron road, the need to connect major north American cities is critical for US and Canadian communities battling traffic congestion and slow journey times.

The 747km Pacific Northwest Rail Corridor (PNWRC) linking Vancouver, British Columbia, with Eugene, Oregon, is one of 11 federally-designated high-speed corridors in the US. The Cascadia high speed project, also known as the Ultra-High-Speed Ground Transportation System (UHSGT), is under development in response to this need and aims to cut journey times between Portland, Seattle and Vancouver BC.

Despite distances of 298km between Portland and Seattle and 251km between Seattle and Vancouver, there was a robust air market prior to the pandemic. The 192km journey by air between Seattle and Vancouver takes 55 minutes, compared with 4h 30min by Amtrak’s Cascades inter-city passenger service. Rail is also slower than the 4h 8min bus journey, which is also only 227km, and much slower than a car journey, which takes 2h 41min.

Rail also fares worst on journey times between Portland and Seattle. The 298km Cascades journey takes 3h 40min, compared with 50 minutes by air for a 209km flight. The bus takes 3h 35min to cover 278km, while a car journey is 3h 14min.

In 2016 it was confirmed that the three largest cities suffered from an average of 142 hours of delay per year per car driver. That is 35 hours more than the average in the planned Texas Central high-speed corridor (Dallas - Houston) and the Brightline inter-city line between Miami and Orlando.
Washington State Department of Transportation (WSDOT) published its Ultra-High-Speed Ground Transportation Business Case Analysis in July 2019. This states that three of the top 10 most congested roads can be found in the Cascadia region. WSDOT estimated that adding a lane in each direction of US Interstate 5 through the state would cost approximately $US 108m at 2018 prices. Plans to expand airports in the region may not be sufficient according to the study. And with Amtrak’s Cascades trains sharing tracks with freight and commuter rail services, there is limited scope to reduce journey times.

Ms Amy Scarton is WSDOT’s deputy secretary. She’s worked there for seven years and at a recent APTA-UIC conference explained more about the Cascades project, which dates from 2016 and is currently in the planning phase.

Scarton calls the scheme a true public-private partnership (PPP) due to the joint partnership “between Washington, Oregon, DC and Microsoft.” She confirms the tech giant has so far put more than $US 500,000 into the planning work.

A study into the proposed new high-speed line shows that journey times of less than an hour between each city is possible, with trains running at 354km/h. Various scenarios suggest there would be between 21 and 30 daily round trips. Some of these would be express services serving only a few stations, others stopping more frequently.

There is the potential to carry 32,000 passengers per hour and estimates suggest between 12% and 20% of current Cascades journeys would move to the high-speed service following surveys carried out in the area. Farebox revenue would be between $US 156m and $US 250m annually by 2040 (using 2019 prices) it is thought. Early cost and revenue comparisons suggest UHSGT could cover its operating costs by 2055; a 10% increase in ridership or 10% decrease in operation costs and that date could move forward to 2040.

These increases are needed. “We are a growing region,” Scarton explains. “By 2050, we’re expecting another three to four million additional residents in this mega region.”

UHSGT is expected to cost up to $US 42bn in up-front costs using 2017 prices. While steep, it’s estimated some 200,000 new jobs related to construction and operation would be created, along with $US 355bn in economic growth.

The report says experience in the US (and internationally) suggests that costs can fall by involving private sector expertise and finance. However, an element of public investment is needed for the upfront costs.

WSDOT spokesperson, Ms Janet Matkin, told IRJ on August 13 that the Infrastructure Investment and Jobs Act (IIJA) being put forward by Biden includes several discretionary grant programmes for which it could apply for passenger rail funding.

As for the project itself, she says that the next steps that need to be taken include stakeholder engagement, technical scenario planning such as conceptual engineering and potential alignments and pre-environmental clearance and governance framework.

The new line is also expected to reduce CO₂ emissions by 6 million tonnes over the first 40 years while there remains the possibility for zero emissions by using clean energy sources; hydro, wind and solar are all suggested as possible sources. The State of Washington estimates that 44% of all greenhouse gas emissions (GHG) are from the transport sector.

Scarton says UHSGT would not be an independent network, instead it will interchange with existing lines. “The trains will of course connect to the existing systems, the existing conventional rail, transit, buses, ferries, active transportation,” she says. “We’re really looking to connect as a new high-speed spine, feeding into all of our existing modes.”

She says the vision is about more than just transport. One key reason for building the new line would also be to support the growth of the Cascadia megaregion. This can be achieved, says the 2019 study, through attracting more businesses and jobs to the region via better transport connections, making the region more affordable for residents as well as creating access to higher-paying jobs and an ambition to unlock sustainable growth.

There remains an acknowledgment that delivering UHSGT would have significant challenges. Nevertheless, WSDOT’s study suggests evidence gained from projects around the globe show that a multi-jurisdictional governance model offering robust and timely decision making while at the same time protecting public accountability is required. Actual project delivery could be facilitated through the creation of a separate public entity that would design, procure and finance the new line. It would require compliance with laws governing international agreements and project delivery mechanisms for the US states it serves and Canada. Previous projects highlighted for this model include the Channel Tunnel linking Britain and France, and the Gordie Howe international bridge across the Detroit river linking Michigan and Ontario, which is currently under construction.

“We’ve looked at some of the European projects in our planning phases,” Scarton says. “We have yet to select a mode or a technology, everything is on the table still when it comes to high-speed travel, and a lot of these technologies are only demonstrated still in Europe.”

Scarton admits there are challenges caused by crossing the border. “For those of you who are piecing together the various funding streams, city, state, local, federal, we also have the Canadian federal and provincial funding streams,” she says, adding that it’s not a one-size-fits-all approach when it comes to community engagement. “In Washington State we have 29 federally recognised tribes,” she says. In British Columbia, just in the province where UHSGT would cross, there are 198 First Nations.

“If you’re working in a mega-region you really need these two things: the shared assets,” she says. “We’re talking about high-speed ground transportation so shared rail, shared economies, but the second thing you also really need is that shared vision. Mega says it all. We’re working to do something mega here. If you don’t have a shared vision from the outset, I think it will be harder to achieve.”

At the conference, held in early June, Scarton was asked about a timeline for the project. She says that the next steps are to develop a concrete financial plan. There is currently no federal funding available because USHGT is still in the planning phases “but we’re developing that strategy, we’re conducting our business engagement and our community engagement,” Scarton says.

Of course, any mega project needs money. Lots of it. Scarton addresses this issue head-on. She claims that in the past five years the project has had “great success” in getting a variety of funding sources for the planning work. “It’s all options on the table, and we are lucky that we already have some private funding in, along with dual state funding and federal funding,” she says. “But right now it is still in the planning stages, and those big dollars are needed for construction.”

However, she admits more work is required, specifically on deciding what the bi-state and international coordinating entity will look like and their funding plan for construction. “That work is still yet to come for us,” Scarton says.

If the ambitious targets for opening and cost-covering are to be met within 20 years, then UHSGT needs to progress. The prize is huge, but so is the effort required to reach that point.