ONE year ago the Dutch-Belgian Fyra high-speed operation collapsed. 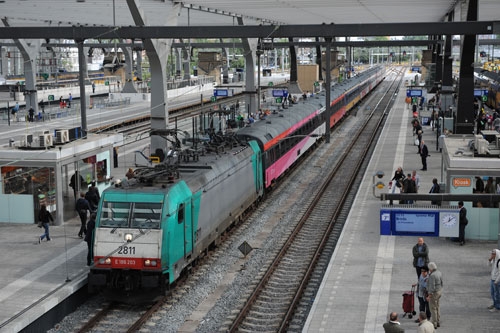 Belgian National Railways (SNCB) and Netherlands Railways (NS) were so dissatisfied with the performance and reliability of the V250 high-speed trains supplied by AnsaldoBreda that they withdrew them from service, leaving hardly any Dutch-Belgian train services in place.

Now both operators have made new arrangements for cross-border operations: Thalys will be the sole provider of high-speed services, while conventional inter-city train services will be reinstated. Abandoning the V250 trains means the end of Dutch domestic high-speed before it even started and the end of the original concept for the HSL-South high-speed line. NS has been aided by a change in the concession structure, while competition still does not get a look in.

With the withdrawal of the V250 trains, it suddenly became extremely difficult to cross the Dutch-Belgian border by train in the first part of 2013. Thalys, a service aimed primarily at the Amsterdam - Paris market, suddenly became the most convenient way to travel between the Dutch and Belgian capitals, and the trains have been fully booked since the Fyra catastrophe, leaving many passengers searching for alternatives.

Some relief appeared with the introduction of an improvised two-hourly service between The Hague and Brussels, but this is a shadow of the former hourly-interval Amsterdam - Brussels Benelux service, which was withdrawn despite much criticism when Fyra was launched in December 2012.

Recognising this short-term solution is unacceptable in the long term, SNCB and NS have been forced to implement a new structure for cross-border services. With its reputation ruined, the Fyra brand will disappear, and NS has started to develop plans for 200km/h inter-city services. In future passengers will have a choice between fast and expensive or slow and cheap services.

The solution cannot be implemented in a single step, so there will be a phased approach to reach the final desired 16 high-speed and 16 conventional trains a day between Amsterdam and Brussels by 2016.

As Thalys is now the only high-speed player between Amsterdam and Brussels the current frequency is no longer sufficient. On October 7 Thalys added two round trips between Amsterdam and Brussels to provide 11 trains per day, with an additional round trip on Fridays. A third daily Amsterdam - Brussels Thalys service was added last month with the start of the 2014 timetable. In April two of these trains will be extended south to Lille Europe.

Thalys is a joint venture between SNCB and French National Railways (SNCF). German Rail (DB) recently decided to sell its stake, while NS is effectively only a partner assisting with operations, staff, and catering in the Netherlands, although NS does own four of the Thalys trains. Given the new situation, NS can hardly be called a real high-speed operator on HSL-South as it is playing second fiddle to SNCF and SNCB.

In 2016 Eurostar will fulfil a long-held ambition by introducing two daily direct services between Amsterdam and London using its new Siemens e320 high-speed trains. However, several operational aspects have yet to be agreed, such as security and customs/border control because Britain is not part of the Schengen agreement which eliminated border controls between member countries. The journey time should be around 4 hours.

For running into the Netherlands, Eurostar will conclude a partnership agreement with NS for network access, operating license, safety certificate, and logistic support. NS expects that Dutch staff will work on the trains between Brussels and Amsterdam.

When NS and SNCB decided that the V250 trains were inadequate for commercial operations about one month after they entered service, a conventional train service had to be re-established as an alternative, and this temporary measure now appears to be permanent. However, the conventional service cannot run north of The Hague as there is no spare track capacity between there and Amsterdam until the December 2014 timetable change when it will be possible to extend the trains to Amsterdam.

The trains are being operated by SNCB four-voltage Traxx locomotives and NS ICRm coaches, which are restricted to 160km/h. The service will run via Roosendaal until 2016 when it will switch to the high-speed line. The Benelux train will then make an intermediate stop at Breda, requiring a reversal, so it is likely that driving trailers will be used. Both locomotives and driving trailers, many of which are currently stored by NS, will have to be equipped with ETCS Level 2 for operation on the high-speed lines.

NS is looking for more Traxx locomotives, and plans to purchase around 24 units equipped with ETCS Level 2 directly from Bombardier without going out to tender due to the urgency of the situation. Again this is a short-term solution as NS intends to acquire a fleet of 200km/h trains for inter-city services. The trains will be equipped with ETCS Level 2 to enable them to run on both the high-speed lines and new or upgraded lines equipped with dual signalling such as the Lelystad - Zwolle Hanzelijn, which opened in December 2012, and Amsterdam - Utrecht. This will allow these trains to operate at 200km/h, as traditional Dutch signalling and the ATB train protection system do not allow speeds above 140km/h. The new trains are not expected to enter service before 2018, and will replace ICM emus and ICR coaches dating from the 1980s sooner than originally planned.

The new set up might have an impact on an initiative by The Hague, which was by-passed by HSL-South, to have its own direct service to Brussels. As cross-border passenger services have been liberalised in the European Union, the city went out to tender to find an operator willing to take it on preferably without any financial support. Arriva Netherlands was chosen and preparations are underway for the service to start at the end of 2014. However, as the new conventional service provided by NS and SNCB will fulfil The Hague's desire for a direct train to Brussels, both Arriva and the city are now considering whether to cancel the project.

In the Netherlands the public transport market is regulated, and a 'core network' of services has been defined and granted to NS as one concession. A separate concession was granted to High Speed Alliance (HSA), a joint venture of NS (90%) and KLM airlines (10%), to operate HSL-South. Besides agreeing to various performance conditions, such as punctuality and capacity, HSA signed up to a very high track access fee of e148m per year.

Although the infrastructure was not completed on time, HSA was unable to start high-speed services as the V250 trains were continually delayed and substitute 160km/h locomotive-hauled trains were not ready either. Fyra services finally started in September 2009 running between Amsterdam and Rotterdam initially, later being extended south to Breda. Despite carrying the Fyra brand, the services were not high-speed. Indeed, HSL-South was opened without any fanfare. This is probably the first time a new high-speed line has been opened without an official inauguration.

In 2011 HSA got into financial difficulties due to the poor state of Fyra services, coupled with the high access charges. The Dutch minister of transport reacted by lowering the access charges to e101m per year.

The Dutch government has now decided to merge both concessions with effect from 2015, so that HSL-South will be operated as part of the national network, rather than the original concept of using it as an exclusively high-speed line.

Meanwhile Arriva Netherlands together with DB, its parent company, proposed the introduction of Dutch domestic high-speed services as well as services to Brussels using 300km/h trains. But the secretary of state for infrastructure quickly rejected the plan, despite the political headache and the potential loss of revenue.

The actions of the Dutch government have been much criticised, and several complaints have been filed with the Dutch and European anti-monopoly authorities. An investigation is underway into the legality of providing state aid to NS after granting the concession, and the Dutch Parliament has launched an investigation. Meanwhile AnsaldoBreda and its clients NS and SNCB are fighting in a Dutch court over the V250 trains.

Much time has been lost on the start up and development of the first Dutch high-speed line and after more than half a decade, the operation of HSL-South still has not been fully developed. Indeed it almost collapsed entirely. No effective measures have been taken to achieve the goals and aims of the original high-speed project, while it should have been clear much sooner to all participants that it was on the wrong track. Given the character of railways and its business, the plan now being executed is the next best solution for long-suffering passengers.