An ETCS strategy starts to emerge in Europe

Despite the fact that Europe is no closer to having an interoperable railway through the creation of a standard signalling system, a strategy is now emerging for the rollout of ETCS in many countries, as David Briginshaw explains. 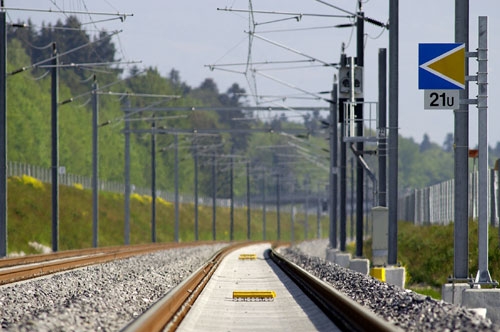 THE roll-out of GSM-R, the telecommunications element of ERTMS, has been a great success with installation either completed or nearing completion in many European countries. Unfortunately, the same cannot be said for ETCS, the signalling and train control element. While around 4400km of lines in Europe have been fitted with ETCS it is still just a patchwork of isolated installations.

There are several reasons for the slow rate of ETCS deployment. Railways cannot afford to replace perfectly good signalling equipment, or to overlay ETCS, just to make a line interoperable without a sound business case. In any case, there is little coordination between neighbouring countries even along the designated ERTMS corridors. A classic case is Corridor A stretching from the Dutch port of Rotterdam, through Germany and Switzerland, to Genoa in Italy. ETCS is already in operation on the Betuwe freight line linking Rotterdam to the German border, Switzerland plans to equip its part of Corridor A by 2015, and the Italians are ready to switch to ETCS but will not do so until there is a commitment from Germany which accounts for the longest section.

Speaking at Global Transport Forum's signalling and train control conference in Zürich in March, Mr Fabio Senesi, head of ATC systems with Italian Rail Network (RFI), summed up the situation. "Regarding the ERTMS corridors in Italy, people say what's stopping you from doing it? Internally there's a big discussion on issuing a tender, but it involves equipping about 3000km at a cost of €180m, half of which would be funded by the European Union (EU). If there's no reciprocity across Europe, then the cost benefit analysis for the project is very poor. We need synchronisation in Europe."

But, as Senesi points out, Italy's newest high-speed lines totalling 610km have ETCS Level 2 without any fall-back signalling and its conventional network is already well-prepared for a rapid conversion to ETCS. "We use interoperable components. We have 12,000km of line equipped with Eurobalises and encoders, and there are 11 radio block centres in operation, so we can switch very quickly to ETCS. How many other countries are preparing like Italy?"

The problem in Germany is that the government would rather spend the money earmarked for the ERTMS corridors elsewhere, partly one suspects because of German Rail's (DB) reluctance to embrace ETCS. Neighbouring France also has little enthusiasm for ETCS, and until these two key countries decide to invest, much of the ERTMS corridors initiative is dead in the water.

The rapid succession of software baselines for ETCS has also deterred certain railways, who have been waiting for some stability, from committing to ETCS. Mr Oscar Rebollo, head of ETCS test specifications with the European Railway Agency (ERA), says Baseline 3 will be available by the end of the year.

Mr Jan Richard, innovation and technology manager with Swiss Federal Railways (SBB), explains why railways are eagerly awaiting its arrival. "Baseline 3 has almost everything in it that you need to operate a railway, and we need Baseline 3 to be able to introduce Level 1 Limited Supervision," he says.

This was echoed by Mr Tony Crabtree, ERTMS team leader with Britain's Association of Train Operating Companies (ATOC). "Baseline 3 gives us several benefits, but we want to stick to it - we need stability. The strategy in Britain is to wait until Baseline 3 is available - we then have a deployment plan which rolls out quickly over the next 20 years."

Mr Klaus-Rüdiger Hase, head of the ETCS onboard programme with DB Networks, believes the concept of stability within ETCS software is wishful thinking. "I'm absolutely sure that once we start using Baseline 3 we will find other things we need, even though we don't know what they are today." However, Hase did qualify this by saying that one problem is that railways sought additional functions without considering the cost implications. "It's a bit like a man entering a bar and ordering a drink, and then looking around to see who will pay for it."

Another obstacle to ETCS deployment across borders is the need to certify equipment separately in each country, which is costly and time-consuming. Mr Thomas Joindot, ERTMS director with French National Railways (SNCF), recounts his experience with retrofitting the Thalys high-speed train fleet with ETCS for operation on the newest Belgian and Dutch high-speed lines. "We encountered lots of paperwork, different cultures, and the fact that problems were not raised simultaneously, which meant endless meetings. The National Safety Authorities (NSAs) were almost proud of issuing authorisations for limited periods, which caused problems when equipment was delivered late. Multiple authorisations with different authorities made the project very complicated."

Rebollo acknowledges that having so many safety authorities in Europe is certainly a cost driver. "In theory, the law allows for cross-border acceptance, but in practice it doesn't happen. It's due to a lack of confidence and I think we need to start again. The Fourth Railway Package is considering whether ERA should become a one-stop-shop for safety certification. We have no official opinion as it is up to the EU member states to decide, but giving more power to ERA would mean increasing our staff and budget, but with the current economic crisis this might not be the right time."

But Joindot warns the high cost of certification could have unintended consequences for interoperability:

"We estimate it costs €1m per country for certification, which means we might decide not to operate a service to another country, or we may postpone a decision until there is a real business case. We haven't done this yet because there is often very strong political pressure to operate a high-speed service to a neighbouring country. We have 27 agencies today, so one body would certainly reduce costs and the effort needed for the certification process."

Despite the problems, national strategies for deploying ETCS are emerging. Some smaller countries, such as Denmark, Belgium, Luxembourg, and Switzerland are taking the opportunity to replace their life-expired conventional signalling with ETCS nationally.

Richard outlines SBB's plans for ETCS: "By the end of 2017, we will have around 3000km with ETCS Level 1 Limited Supervision compared with nothing today, and 417km with Level 2, whereas at the moment we only have Level 2 on the Mattstetten - Rothrist line and in the Lötschberg base tunnel. This was the first use of cab signalling in Switzerland, and we can see clear advantages with it. Drivers get confused with the number of signals on the approach to big stations and this restricts capacity, but with cab signalling you can have very short block sections, say 100m, near stations.

"The question now is whether to renew the signalling in stations with Level 2," says Richard. "We need to be aware of the impact on the ETCS train data of shunting, and joining and splitting trains at junctions. You would also need a longer process time for trains to change the direction of travel, so we need to work on this."

A serious accident at Buizingen, Belgium, in February 2010 has led to the acceleration of Infrabel's plans to extend its own TBL1+ cab signalling and ATP system, which is compatible with ETCS track equipment and currently covers 42.4% of the network. Infrabel has 101km of ETCS Level 1 on conventional track and 148km of Level 2 on high-speed lines and ideally it would like to install Level 2, or Level 3 when it is available, on the network. "The cost of going to Level 2 is far too expensive - €4.68bn for the whole network as we would need to make too many alterations to interlockings, for example," says Mr Ivan Thielemans, Infrabel's head of projects. So Infrabel has developed a €2bn migration strategy. By 2015, TBL1+ will be installed on the entire network and current ETCS Level 1 projects will be completed. By 2022, 2400km of secondary lines will have ETCS Level 1 Limited Supervision, Level 1 will be operational on 1200km of main lines, and a further 3300km of main lines will have Level 2. By 2025, only ETCS-equipped trains will be permitted on the Belgian network. Beyond this, lines will be upgraded to Level 2 or 3 during resignalling.

DB also has a strategy, as Hase explains: "About 2400km of double-track lines which carry more than 60% of the traffic have LZB. But LZB is getting more and more expensive to maintain, and all the people who know the technology will have retired by 2026, so we plan to start replacing LZB with ETCS Level 2 in 2020 and to complete it by 2026."

As far as France is concerned, Joindot reveals, SNCF only operates with ETCS beyond its borders. "Apart from Thalys, we do not retrofit trains with ETCS as it is too expensive," Joindot says. Nevertheless all TGVs supplied since 2009, new freight locomotives, and regional trains beginning with the Régiolis fleet from next year are being delivered with ETCS. In all, 150 SNCF trains already supplied or being delivered are equipped with ETCS, and it is being installed on all high-speed lines alongside TVM 430 cab signalling.

Clearly plans to deploy ETCS in various European countries are starting to crystallise so that within the next 15 to 20 years a substantial proportion of main lines and most high-speed lines should have it. Sweden, for example will have equipped all of its main lines by 2030. But there is still a lack of commitment to international projects to achieve interoperability, which was the main objective of developing ERTMS in the first place.