The first train in 15 years to traverse the 206km Chilean section of the Arica - La Paz Railway was flagged off at the port of Arica on May 5. However, the train was halted near the Bolivian border by angry truckers fearful of competition from rail, as Ian Thomson-Newman reports. 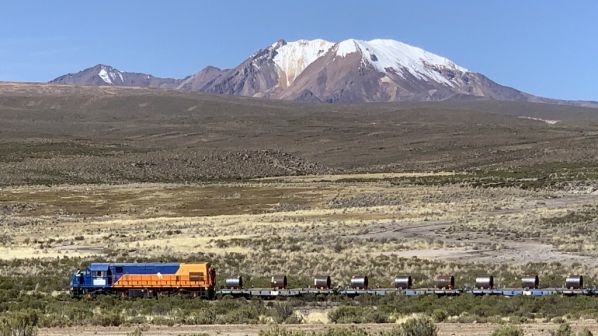 THE Chilean section of the Arica to La Paz Railway (FCALP) is 206.3km long and winds as it climbs from almost sea level to 4257m. It is difficult to operate, with multiple curves with a radius of less than 150m and a 40km section where the ruling gradient is 6%.

Operating the 167.1km Bolivian section, on the other hand, is relatively easy. The section from the border to its present-day terminus at Viacha is flat and relatively straight. The Chilean section belongs to FCALP, a subsidiary of Chilean State Railways (EFE), while the Bolivian section is owned by the Bolivian state but administered by concessionaire Andean Railway (FCA).

The Chilean section suffered serious damage in February 2001, when heavy rains associated with La Niña oceanic current swelled the flow of the River Lluta, washing away bridges and putting the railway out of action for 18 months during which traffic switched to road, and mostly never returned. The last commercial trains ran over the Chilean section in late 2005, and in early 2006 its Bolivian-controlled concessionaire was declared bankrupt.

FCALP competes with the CH11 highway running along the same corridor, although on a different alignment, for which no tolls are charged, either now or in the foreseeable future. Road-borne freight carried between the border and Arica, almost entirely by Bolivian lorries, is effectively subsidised to the tune of $US 5.60 per tonne, on account of highway upkeep, delays caused to other traffic, and accidents. However, even if a rail concessionaire was given a subsidy, the concession would still not necessarily be viable.

By this time, a programme to rehabilitate the FCALP had been largely completed, including the removal of hundreds of tonnes of soil in Arica which had been contaminated over the years by lead, tin and other minerals seeping from freight wagons. Two of the railway’s GE U13C mainline locomotives were rebuilt and upgraded but some important track renewal still remains to be done.

The port of Arica currently handles more than two million tonnes of Bolivian overseas trade per year. All of this freight arrives or departs by road even though much of it is eminently suitable for rail, including processed soya from the department of Santa Cruz, in eastern Bolivia.

South America’s principal soya producers - Argentina, Brazil and Paraguay - export mainly to China and other Asian markets, but Bolivia is different, focusing firmly on countries in South America’s Andean chain, reached by trucks through Arica or Matarani in Peru, or shipped via the Paraná/Paraguay waterway and then through the Panama Canal.

The alternative of trucking soya to Oruro (rather than Cochabamba since the Oruro - Cochabamba rail line is out of operation) and onwards via FCA and FCALP trains is clearly attractive. This led to FCA starting negotiations with FCALP SA about reviving the railway down to Arica.

First, the technical feasibility of restoring traffic was checked by staging a trial run, the two U13Cs taking 422 tonnes of imported steel coils up from Arica and, so it was envisaged, a similar tonnage of soya products down from Oruro. The train had to be divided to scale the 6% gradients. All went well until the upward bound train reached Visviri, which is the last station on the Chilean side, where it was halted due to actions by the politically influential Bolivian truckers. The truckers blocked highways leading to Chile and Peru in protest against the threat of rail competition, apparently oblivious to the fact that it was they who invaded the railway’s market and not the other way around, mainly following the paving of the CH11 highway in the early 1990s.

Most of the roadblocks were called off after talks between the truckers, FCA and the Bolivian minister for public works. Under the terms of its concession, FCA does not need permission from anyone to run on any part of its network, but it was not in a position to resist the political pressure heaped upon it. The three parties agreed to set up working groups to study the situation.

There is no doubt that FCA would have no technical problems in operating between the frontier, Viacha and Oruro. Any potential problems, truckers apart, lie on the Chilean side. The two U13Cs are FCALP´s only operable locomotives. Although modernised and re-engineered, they struggle to haul heavy loads over the 6% gradients. They are also 54 years old and the workshop at Chinchorro in Arica is no longer equipped to conduct general overhauls to locomotives. In any case, to maintain traffic, neither of the U13Cs could be spared to undergo repairs.

The trial run merely demonstrated the short-term technical feasibility of running freight trains. Longer term viability requires back-up locomotives or allowing FCA locomotives to work through to Arica, as well as the completion of track renewal.

Even were the truckers to cede, which is something they are not in the habit of doing, there would remain the problem of economic feasibility. Operating FCALP is not possible without a subsidy, at least in the form of a waiver of track access charges; the Chilean government effectively subsidises freight transport handled by Bolivian truckers over the CH11 highway, but no such subsidy appears in the accounts of any ministry or public company. Even if an explicit subsidy is granted to enable FCALP to compete, discontent might be expressed by Bolivian truckers and the freight concessionaires who pay hefty fees to use EFE’s tracks in the south of the country. The question is who has the determination to revive the railway as a going concern?