Changes to the way people are working, the ability to recruit staff and the need for a reliable service to remain competitive is leading East Japan Railway to pursue technological advances in train control. Richard Clinnick reports. 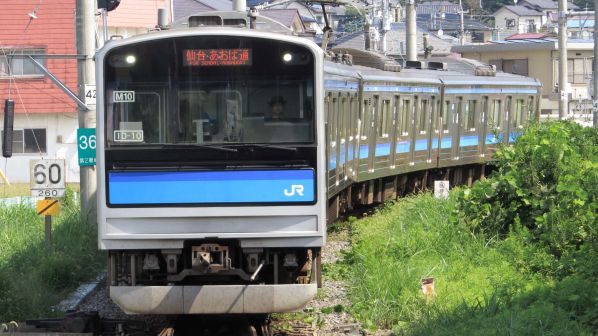 Atacs was first deployed on the Senseki Line from October 2011. Since then functions have been developed around the use of level crossings. Photo: JR East

EAST Japan Railway (JR East) is facing several issues that need addressing in the medium to long term, including depopulation, changes to the way people are working, a decline in the number of passengers travelling and a drop in the number of people wishing to work on the railway. The Covid-19 pandemic has not helped matters either. Business decisions have to be made regarding the railway of the future, and technology appears to be the solution.

The railway says that it must make the most of state-of-the-art technology such as automation, radio transmission and train control. There is a desire to harmonise the operation system and train control to offer a high-performance service for passengers. Not only that, but these solutions can also address other issues facing JR East, including staffing and costs associated with the current infrastructure.

Just over a decade after JR East introduced Advanced Train Administration and Communication System (Atacs) on an 18km section of the Senseki Line between Aobadori and Higashi-Shiogama on the east coast of Japan, there are plans to introduce the system on two busy commuter lines in Tokyo by 2031.

The radio-based train control system has similar functions to those of communications-based train control (CBTC) and the European Train Control System (ETCS) Level 3. However, there is no requirement for track circuits with Atacs. Instead trains recognise their own position.

When Atacs was launched more than a decade ago, the Senseki Line had more than 200 trains per day operating at five-minute headways. Each train uses a tachometer generator to detect its own speed, which it subsequently uses to calculate the distance it has travelled to that point. This enables the train to identify its exact location. Train distance control is based on a moving block signalling system whereby each train is constantly transmitting its exact location information by radio to simplified ground facilities.

Four years after the introduction of Atacs in Sendai, JR East was reporting reliability figures of 99.9999%, with no recognition errors in either refreshing a train’s location or switching between Atacs and Automatic Train Protection.

Those ground facilities use this information to create a Limit of Movement Authority (LMA) for a train at the point of the specified safety margin from the rear of the preceding train. The LMA of a following train moves forward according to the movement of the preceding trains. Any following train will then calculate the speed profile based on LMA data transmitted from the ground facilities. When the speed is greater than that permitted, the train is automatically decelerated.

Complementary functions feature on the core Atacs technology. These include an interlocking function whereby the route is controlled by computerised interlocking equipment. A train protection function uses emergency signals from level crossings and station platforms to transmit messages to trains by radio to enable automatic braking. A fixed location speed limit function is also included for when speed checking and automatic brake control is implemented according to the speed limits in fixed locations such as curves. Furthermore, the train speeds can be adjusted depending on circumstances such as poor weather.

One of the key features of Atacs is its ability to create shorter headways, therefore enabling more trains to operate on one line without expensive and invasive track enhancements. The introduction of Atacs also reduces, or eliminates, the need for cabling, lineside signals and track circuits. The benefit here is the reduction, or in many cases elimination, of maintenance costs associated with lineside infrastructure.

The system’s performance is impressive. Four years after its introduction in Sendai, JR East was reporting reliability figures of 99.9999%, with no recognition errors in either refreshing a train’s location or switching between Atacs and Automatic Train Protection (ATP).

Wider introduction of Atacs is designed to facilitate JR East’s expansion of automatic train operation (ATO), including a pilot launched on a 29.7km section of the Joban Line between Ayase and Toride in March 2021. The equipment is fitted to series E33 EMUs that operate on the line with the ATO system operating over existing ATC signalling, regulating speeds between stations. Drivers remain onboard the trains, opening and closing doors and activating the ATO system. When this was launched, JR East said experience gained from operation at Grade of Automation 2 (GoA 2) would inform future work to transition to driverless operation.

In July last year, JR East launched the Centre of Excellence for the Next Generation Mobility Systems project. In this the railway confirms its aim to improve the stability of train operation and attain flexible operation according to passenger demand. JR East will achieve this through harmonising Atacs, ATO and Autonomous Decentralised Transport Operation Control System (ATOS) and continue its work to achieve driverless operation.

Furthermore, the launch of this programme allows JR East to further promote innovation on the Tokyo metropolitan area rail network as part of an ambition to improve its sustainable development goal (SDG) credentials and to help achieve a “work-style reform” for employees through technological innovation.

Using Atacs to control the trains will help JR East conserve energy as operation will become more consistent due to the elimination of human error. This will also protect the components on the trains, which combined with the lack of lineside equipment will help reduce costs through the lack of repeat maintenance.

JR East announced in early December 2021 that Atacs and high performance ATO will be deployed next on the Yamanote-loop Line and the Keihin-Tohoku-Negishi Line sometime between 2028 and 2031. Preparations for the introduction of ATO and driver-only operation (DOO) will take place between 2025 and 2030. JR says it is currently in the process of considering the hardware and technical specifications that will be required, and then it will prepare to select manufacturers.

Hitachi is the existing supplier of Atacs and ATOS control centre equipment, transponders and radio base stations, while Mitsubishi Electric provides the on-board equipment.

The system will operate alongside ATOS to achieve efficient train operation, including delay recovery and energy-saving methods. JR East also aims to promote the development of suitable technology to enable Grade of Automation 3 (GoA 3) driverless operation in the future. However, the railway admits that will require the construction of a system that can respond immediately even in the event of disruption.

JR East also plans to make the most of the function that can predict and update timetables in case of disruption. By doing this, it will enable the creation of a system that can operate efficiently along the entire line, implementing delay recovery and introducing energy-saving operation by train group control.

Despite the use of Atacs elsewhere, JR East told IRJ in December that there are challenges that must be addressed.

Access to the railway is crucial, but must be planned carefully. Currently any testing or large construction that JR East requires is conducted on the main network rather than any test facility during a three-hour window each night when commercial services are not operating. The alternative is suspending the high-density timetable.

The railway also plans to install the new software on as many vehicles as it can in a short period of time. There are concerns regarding the large amount of data being sent from on board the trains to the ground devices in a timely manner that can enable the checking of the software’s condition.

In an ever-changing industry, the development of Atacs and its implementation could well be the answer to a number of issues affecting railways, and not just capacity.