One of the practical achievements stemming from Europe’s Shift2Rail research project is a new trailer vehicle designed to overcome the challenges faced in grinding tram and light rail tracks in densely-populated urban areas. David Briginshaw reports on the development of the new grinder. 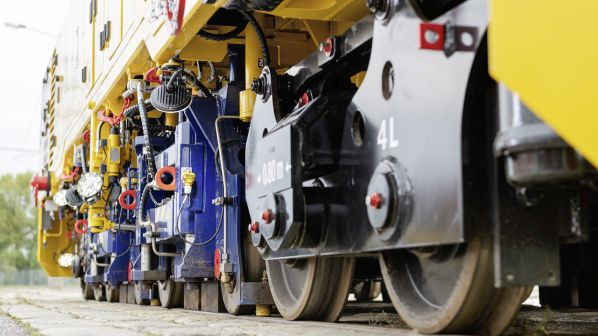 RAIL surfaces require regular inspection and maintenance. Waves, corrugations, and other defects on the rail surface occur over time and cause structure-borne and airborne noise emissions, which are particularly unpleasant in urban areas.

According to the World Health Organisation (WHO), noise pollution is one of the greatest environmental hazards and negatively affects people’s physical and mental health, so there is pressure on urban rail operators to reduce the acoustic emissions that inevitably result from rail head and running edge damage.

The noise emitted by rail vehicles at lower and medium speeds depends strongly on the condition of the contact surface between wheel and rail. The rolling of the wheel is the main cause of this noise which can be reduced through acoustic grinding. The reduced dynamic excitation of the wheel will significantly cut rail wear and noise emissions.

Regular preventive rail grinding reduces emissions, extends rail life and lowers costs in the long term by preventing rail head defects early on, which when left unmanaged will lead to damage and costly repairs. Regular grinding also removes crushed leaves and an oily film from the rail head thereby maintaining safe braking distances. Rail grinders can also be used to remove the rolling skin on the head of new rails.

The Automatic Track Machine Oscillator (Atmo) rail grinding trailer is the result of a unique collaboration between industry partners, university experts, and infrastructure operators to address the challenge of grinding rails on urban tram and light rail networks. The project started in 2016 as part of the European Union’s Shift2Rail research initiative.

A needs assessment conducted by the Vienna University of Technology, which addressed the growing challenges of maintaining rails in urban areas, formed the scientific basis for the project. University experts conducted the research, and Plasser & Theurer provided the knowhow to design and build the prototype.

In May 2020, Plasser & Theurer began to tweak the prototype at its factory in Linz, Austria. This was followed by practical tests simulating various conditions on tram tracks. Plasser expects the following findings from the series of tests and practical operations starting with standard gauge lines: ideal frequency and amplitude for oscillating operation, best working speed, vertical load and selection of grinding stones that are equally well suited for both grinding methods. Sound measurements were also made as well as comparative tests on the track before and after rail grinding.

During oscillating rail grinding, a hydraulic mechanism moves the grinding saddles horizontally, in the longitudinal direction of the rails, back and forth with variable frequency.

Each saddle features two grinding stones per side, making grinding of the rail head more precise. Additionally, they remove more material in a single pass compared with the sliding grinding method. Oscillating grinding is particularly suited for areas prone to developing rail defects, such as stations or stops where waves form or other hotspots where corrugations occur.

The Atmo is fitted with a water-cooled, sound-insulated 100kW Deutz diesel engine with exhaust after-treatment to meet the Euro 5 emission standard.
The new rail grinding trailer can grind plain track as well as turnouts. It is towed to the worksite by a powered wagon or road-rail vehicle. No staff is required on the flat rail grinding trailer.

With rising passenger numbers, public transport operators increasingly provide a 24-hour service, which leaves hardly any time for scheduled track possessions or routine maintenance. Nevertheless, preventive rail grinding is essential, especially with increasing traffic volumes. The Atmo trailer grinds at speeds of up to 30km/h and grinding can be carried out in both directions of travel which will allow the machine to blend seamlessly into normal traffic without interrupting LRVs en route.

While developing the rail grinding trailer, a challenge was how to grind curved sections of rail. Compared with heavy rail, urban rail networks often have relatively tight radii. The new rail grinding trailer can travel along radii as little as 16.25m and can grind radii down to 17.25m.

When travelling through curves, the grinding stones are aligned in relation to the radius so that they are always positioned above the rail head. This allows them to work freely through possible raised pavements in sections with grooved rails, also in tight radii.

In the past, this presented an issue for some rail grinding machines. Unlike with conventional grinding vehicles, there is no need to lift the grinding stones when passing over turnouts and crossings.

The machine is equipped with a 2800 litre water tank for wet grinding. A thin water film supports the rail grinding process and improves results. It also prevents flying sparks which could pose a fire hazard in dry surroundings and tunnels.

Research into the development of Atmo will continue until it is ready to become a commercial product.