With a pipeline of work worth $A 154bn stretching over the next 15 years, Australia’s rail industry is in confident mood. Tony Duboudin spoke to Australasian Railway Association CEO Caroline Wilkie. 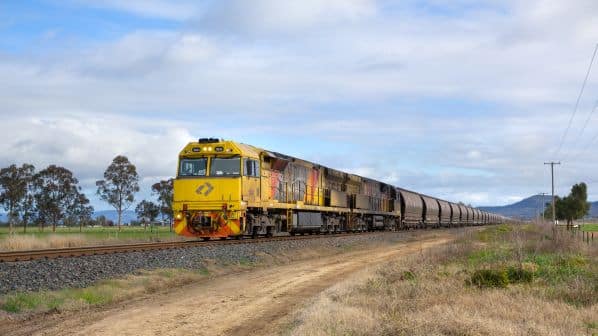 Projects valued at $A 154bn are in the pipeline for the next 15 years, which could offer improvements in rail freight performance and capacity as well as improved urban connectivity. However, skills shortages and inflation could hold back delivery. Photo: David Gubler

THE Covid-19 pandemic and the uncertain state of the global economy do not appear to be slowing Australia’s rail construction boom. Far from it, according to the Australasian Railway Association (ARA), which says that the industry is moving forward “with gusto.”

ARA CEO, Ms Caroline Wilkie, points to the association’s Australia Rail Market Outlook report, released at the AusRAIL 2022 event last month, which identifies a pipeline of work stretching over the next 15 years valued at$A 154bn ($US 103.4bn). “Projects could well be revised or their delivery timescales extended in the future, but from what we have seen we do not expect that to be the case,” Wilkie says. “From discussions we are having there is still the appetite to proceed with the projects currently budgeted for.”

Many of these projects aim to provide new access to rail, including metros in the major cities, regional passenger projects and the Inland Rail programme to create a 1700km freight route from Melbourne to Brisbane. All of them are nation-building in character, Wilkie notes. “So we are very confident the pipeline will continue to be strong for another 15 years.”

Some of the projects now being taken forward aim to put right the lack of sustained expenditure in the past. “There were at least 20 years of major under-investment in rail before this big boom started,” Wilkie says. You can see it in the ARA in the growth in our membership and the growth in attendance at courses and at AusRail. There is a major buzz in the industry in Australia right now.”

However, this bonanza comes at a time when Australia, like many other economies, is grappling with the skills shortages and inflation that are making workers hard to find and increasing the cost of raw materials.

“There were at least 20 years of major under-investment in rail before this big boom started.”

Wilkie recognises that it will be hard to find workers for every project. “The significant infrastructure pipeline across Australia is expected to create skills and resourcing challenges in the years ahead, particular as activity in the sector peaks.” But she is clear that “a certain, long-term pipeline is essential to support industry planning so we can best prepare to meet this demand.”

“Should there be a need to extend some project timeframes to manage these constraints, it is important industry and government work together to ensure this is approached in a consistent and coordinated way,” Wilkie says.

ARA is currently awaiting the findings of an independent review of the Inland Rail project that the recently-elected federal government has commissioned from investment banker and business leader Dr Kerry Schott. The Schott Review is due to be completed by early 2023. “From an ARA perspective we are keen to see certainty from the government about the project and certainty about its route once we get up to Queensland,” Wilkie says.

“What is very important now are the intermodal connections and what the government’s plans are.”
Wilkie believes that Inland Rail is not just about linking Melbourne with Brisbane, and the industry needs to ensure that there are the right connections, including with road, and that the system works as a total package.

Once Inland Rail is completed, ARA does not see any major freight infrastructure projects on the horizon, and expects the focus to shift to upgrading existing routes. “Further work needs to be done and a significant amount of investment is needed to ensure the resilience of the national network,” Wilkie says. “We have seen in Australia major challenges, particularly on the East-West line, in terms of damage due to rain and natural disasters.”

Wilkie believes that rail’s sustainability credentials need to be emphasised to help make it a more attractive option for moving freight other than bulk commodities such as coal, iron ore and wheat, which currently make up over 80% of rail freight traffic in Australia. Productivity, efficiency and reliability are also areas where rail could improve and become a more attractive option for freight shippers.

Rail and the wider transport sector have a critical role to play in helping to meet the government’s target of achieving net zero emissions by 2050, says Wilkie. “Australia is at the crossroads,” she says. “There are many discussions taking place on what the future sustainability role of the industry will be.”

“I believe in the vision of our prime minister who is passionate about transport and I do believe that one day there will be high-speed rail.”

She points out that commuter operator Sydney Trains has signed a supply agreement for renewable electricity that targets net zero emissions, and that the Metro suburban and light rail networks in Melbourne will be powered by 100% renewable energy by 2025. “But we need to go further than that so there is the question of what role do hydrogen, electrical power, biofuel and battery power have to play and what infrastructure do we need.”

Wilkie says that transitioning to new technology is going to be a very expensive exercise for some rail operators, and certainly far more challenging than replacing a truck with a more efficient and less polluting model. “I feel that there is a role for government to support the transition with either tax breaks or other incentives,” she says.

A positive government may also see high-speed rail arrive in Australia at some point in the future. “I believe in the vision of our prime minister who is passionate about transport and I do believe that one day there will be high-speed rail,” Wilkie says. “Will that be in my lifetime? Possibly not. But I do believe that there is enough will and vision, more so than ever in history, for us to have a good crack at this. I remain optimistic.

“Given the state of some of our networks at the moment a move to faster rail would be a gigantic leap for us. I think this is a two-pronged issue. I think we have to have a serious discussion about faster rail, particularly in those core corridors. You could make the line from Sydney to Melbourne European-standard and get a journey time of five hours,” Wilkie says.

The ARA CEO is also optimistic about the prospects for the domestic supply industry. “There has never been a more exciting time for rail manufacturing in Australia,” Wilkie says, citing the federal government’s focus on developing a national rail manufacturing plan and the fact that it is looking at bringing back a rail advocate to support the industry.

“Currently rail manufacturing is worth about $A 2.4bn and there is a strong forward focus and there are a lot of big orders coming through,” Wilkie says. “We are in a really good place right now. What I would like to see is more harmonisation, both in the terms of government approach to procurement but also looking at the things we are doing that are making our own lives difficult and forcing costs up.”

She highlights the issue of rolling stock type approval. “It is ridiculous that you can have a piece of kit working in one state and you could use it for 10 years and you go to another state and find it will not be approved.” Hence ARA will be focusing its efforts on trying to establish a national type-approval process for Australia which it believes would be a huge boom to the rail manufacturing sector.

Many rolling stock orders are being driven by the major urban rail projects taking place in every state capital, from Sydney Metro to Cross River Rail in Brisbane and Melbourne’s Suburban Rail Loop (SRL). Despite the changing working patterns brought about by the Covid-19 pandemic, the two largest projects in Sydney and Melbourne are completely justified in Wilkie’s view.

“ARA has just completed a survey of 2500 metro residents in Sydney, Melbourne, Adelaide, Perth and Brisbane, and affordability and sustainability benefits were front of mind,” she reports.

While it was apparent that more people were working from home, when asked what would be the main reason which would persuade them to use rail more, respondents cited fuel costs, congestion and parking charges. “Even though there are challenges in terms of people working from home more, there are still some serious economic influences which make rail very competitive, particularly if the cost of living continues to rise,” Wilkie says. Reliability, safety, security and convenience were also major reasons to choose rail, according to the ARA survey.

“So that gives us a good place to start when we are looking at the issues operators need to consider to get more people back to rail,” Wilkie says. “Frequency of service was also identified as a key opportunity to increase rail use. And that is why we think Sydney Metro and Melbourne SRL are such great projects, particularly Sydney Metro that has the frequency. So I expect that would lead to significant uptake.”

Both projects are critical as they would bring the network to areas that had not enjoyed ready access to rail in the past. “There is significant population growth in the areas that they are starting to operate in and there have been decades of under-investment in rail infrastructure in western parts of both Sydney and Melbourne,” Wilkie says.