During the IAF track maintenance exhibition in Münster, Germany, in June, Vossloh invited a small group of railway journalists to visit its new automated fastening factory in Werdohl. David Briginshaw reports on this new state-of-the art facility which was inaugurated in May. 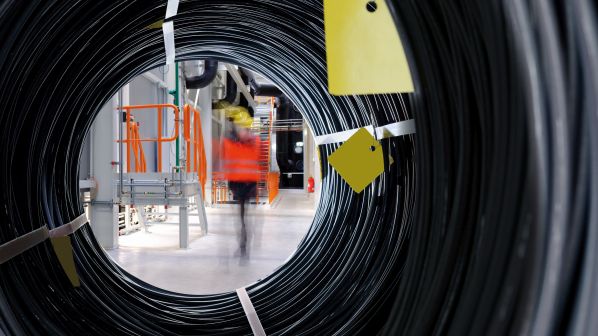 Almost the entire process from when the steel is supplied in wire rods until the fastenings are packed ready for direct shipment is automated. Photos: Vossloh

VOSSLOH is extremely proud of its new automated rail fastening plant which was built on the site of its existing factory in Werdohl, Germany, and that it was able to maintain production throughout the construction.

The Vossloh board took the decision to construct a new factory in 2015. Planning, design of the new factory layout and invitations to tender for the project followed in 2016. Demolition of the old buildings began in autumn 2018. A ground-breaking ceremony for the new €40m plant was held on July 5 2019 and construction and installation of the new manufacturing equipment was completed in the fourth quarter of 2020.

Commissioning of the new plant got underway in April 2021. “We completed the project in May 2021, without any delays because of Covid-19,” Mr Andree Czipura, managing director and chief operating officer of Vossloh Fastening Systems, explained. “With blood, sweat and tears you can complete a project on time and within budget, even in Germany.

“It wasn’t a copy and paste of our old production facility, it was a complete rethink. We used a lot of our own technology and know-how. This factory is our vision of a best-cost high-production site and represents a huge commitment by Vossloh to steel production at a time when the automotive industry is leaving Germany.

“We are talking about very lean production - you have to be lean to survive. After the wire rods arrive almost nobody touches anything until the fastenings are packed ready for direct shipment to the customer.”

Czipura explained that Vossloh had considered building a new factory on a greenfield site, but this idea was rejected because very few people from the existing workforce were willing to move which would have resulted in the company losing a large part of its knowledge base. “Our biggest asset is our people who have contributed to our success,” he says. “We should not forget our blue-collar workers - everything is so much more automated than in the past. People took the opportunity to change, so we did a lot of retraining despite the coronavirus.” There is another reason why it was necessary to automate the production process, as Czipura explained. “Young people don’t want to work in a steel plant, but mechatronics is sexy.”

Vossloh’s fastenings are produced from up to 100% recycled raw material, which is supplied in the form of wire coils from steel works in Germany or elsewhere in the European Union. In order to impart the desired properties to the steel wire, it passes through a 600m-long multi-step production process.

The pickling alone comprises eight stages. In a succession of several baths, the steel surface is cleaned, and rust is removed. “We use sulphuric acid, so we have to be very careful,” explains Mr James Worley, project manager with Vossloh’s industrial engineering department, during the tour of the new factory. “It is an enclosed system and very clean air exits the process.” The coil pickling takes about 1 hour.

The wire is then unreeled, straightened and cut into rods of a defined length. The length varies depending on the type of fastening to be produced

The rods are then bent in a five-step process using individual presses and a handling robot. Each press has a compressive force of 400 tonnes. Around 20,000 fastenings are produced per shift which is sufficient to clamp 3.1km of track.

The fastenings are then placed separately by a robot on frames, rather than being deposited as bulk in steel containers. This way, each fastening can be identified, counted and handled separately.

The fastenings are then washed to remove the oil and chalk that had been applied for the bending process. There are two production lines for this process.

To achieve the ideal balance of hardness and elasticity, the hardening and tempering process is performed in continuous belt furnaces. The balanced microstructure of the metal and the desired quality are ensured through the right sequence of twice heating in the furnace at temperatures of up to 900oC and cooling in the dipping bath. The fastenings are then washed and dried before passing through another oven at 400oC for tempering.

When the fastenings have cooled down to ambient temperature, they are scanned by another robot and the packs of fastenings are then either sent for coating or packaged in the ordered quantity for direct shipping to the customer. Coating, which is optional, takes place at 240oC. The average coating thickness is 10µm.“This process is now 80% faster with our new machine and we have cut the time to one day so we can give our customers a much more accurate delivery time,” Worley says.

The new factory also includes six automated injection moulding machines based on Vossloh’s own technology, two to produce dowls and four to manufacture angled-guide plates. Each machine can produce 700 units per hour.

Vossloh has production lines for the highly elastic cellentic rail pads and intermediate plates in Lüdenscheid, where the company’s central warehouse and logistics centre is situated. Shipping of finished products takes place directly from there using various packaging systems. This includes Vossloh’s Smartbox, which can be folded when empty, so they have only half the volume during storage and return shipping.

Thanks to the automation of the production process, all data are available in real time, from the receipt and processing of the order to the scheduling of production and manufacture itself, all controlled by a manufacturing execution system.

The order data define the quantity, type of steel, bending geometry, treatment, hardening and tempering as well as the type of packaging required. Since order data and production are linked together, the material flow in the linked production line is precisely controlled. Vossloh says digital control and monitoring of the process provide end-to-end production security.

“All this ensures faster and more reliable processing of orders and more flexibility in our response to customer wishes,” Vossloh concludes.