Glasgow, Scotland’s largest city, is home to one of the world’s smallest and oldest metro systems. Strathclyde Partnership for Transport senior director Charlie Hoskins tells Keith Barrow how modernisation and automation is bringing this technically-unique system into the 21st century. 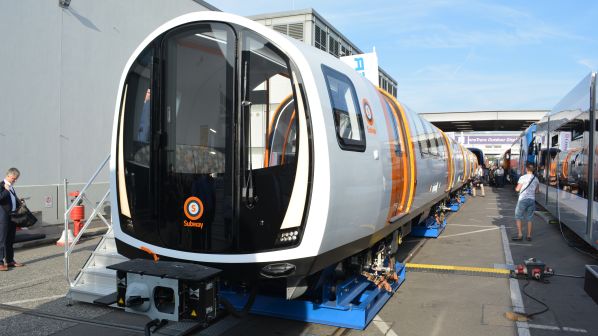 The new Stadler train for Glasgow Subway was unveiled at InnoTrans 2018 in Berlin.

EVERYTHING about Glasgow’s Subway network has been done on a different scale to most metro systems. Scotland’s largest city boasts the world’s third-oldest underground metro network, but it remains one of the smallest - despite various proposals for extensions, the Subway is the same length it was on the day it opened in 1896, with just one 10.5km line encircling the city centre.

It is the only 1219mm-gauge railway in the world still in regular operation and 36m-long trains squeeze through twin-bore single-track tunnels with an internal diameter of just 3.35m - smaller even than London’s deep tube lines, which have a minimum internal diameter of 3.56m.

The 15-station line was originally built for cable-hauled operation, with stationary steam engines providing power for the cable, which ran continuously at a speed of 19km/h. In the 1930s it was converted to a 600V dc third-rail electric system, although the original wooden-bodied rolling stock was retained. By the late 1970s, declining ridership and underinvestment had brought the Subway to the brink of collapse and the line was closed for three years for total modernisation, including resignalling, upgrading of stations, and the replacement of rolling stock.

In the 2017-18 financial year, which ended on March 31, the line carried 12.7 million passengers, a decline of 2 million compared with the post-modernisation peak years of the late 1990s, making it one of the lowest-ridership metros in the world. By 2010, the Subway was once more beginning to suffer the effects of ageing electrical and mechanical systems and the deterioration of its century-old tunnels.

The quirks of the Subway pose some unique challenges for the line’s operator, Strathclyde Partnership for Transport (SPT). “The age of the Subway means we are always finding things out about the system we didn’t know,” says SPT senior director, Mr Charlie Hoskins. “We don’t always have the opportunity to go to the market for standard products and there isn’t always a technical standard that applies to what we do, so often we have to solve problems in our own way.”

To bring the system into the 21st century, the board of SPT approved a £288.7m upgrade in April 2010 and the business case was endorsed a year later by the Scottish government, which is contributing £246m to the project.

For such a small system, delivering such a comprehensive programme of renewals without disrupting operations has been a major challenge and SPT looked to suppliers for technical guidance. “We had to do a lot of market consultation,” Hoskins explains. “We knew our infrastructure, but we couldn’t really specify what we wanted it to deliver in the future. We don’t have a big engineering department, we only do this every 35-40 years, so we felt it would be better for the industry to come together and do the system integration for us.”

The rollout of smartcard ticketing has improved integration between the Subway and the wider public transport network. The smart ticketing system used on the Subway was deployed by Nevis Technologies, a joint venture between SPT and Rambus and is compliant with the British Itso standard.

Since the completion of the smartcard rollout, SPT has worked with Abellio ScotRail to provide passengers with an integrated ticket option for through journeys between main line and Subway stations. Major bus operators in Scotland are also using back-office systems from Nevis Technologies, enabling them to interface with the SPT system. ScotRail smart tickets and Tripper multi-operator bus tickets can be loaded onto the Subway Smartcard and online top-up was introduced for the Subway Smartcard in 2016. By the start of 2018 there were more than 161,000 of the smartcards in circulation. SPT has also been trialling the Subway SmartApp for Android devices which enables passengers to activate ticket barriers using a mobile phone.

The £50m stations programme began in 2011 with the 15-month upgrading of Hillhead, the Subway’s second-busiest station. Refurbishment works have since been completed at a further 10 stations, and a contract for the modernisation of the four remaining stations (St George’s Cross, Cowcaddens, Kinning Park and West Street) is due to be awarded by the end of the year. 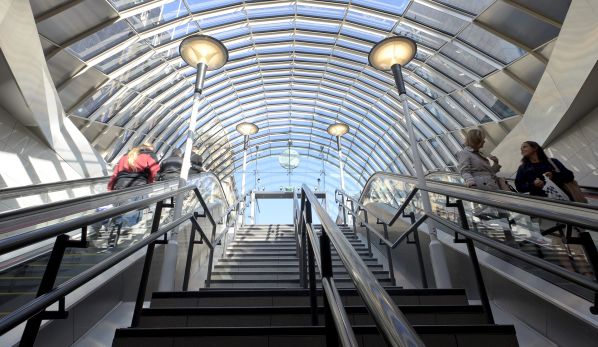 The most extensive works were carried out at St Enoch, the interchange for Glasgow Central (Scotland’s busiest main line station), where two new glass canopies now span the station entrances. New moving walkways have been installed at Buchanan Street, the interchange for Queen Street station, while a £7m bus-Subway interchange at Govan was completed in 2016, improving links between the two modes.

In 2011 Otis was awarded a contract to replace all 28 escalators and lifts have been installed at two key stations - St Enoch and Govan - to improve accessibility for passengers with reduced mobility. Particular attention has been paid to improving access for visually- impaired people including tactile maps at stations, 30-point colour contrast stair nosings, and double-height handrails which are not ‘cold to touch.’

The iVENCS station management system from ASL Controls will be rolled out at all stations, and 1.7m-high platform screen doors supplied by Gilgen Door Systems will be installed as SPT prepares for the migration to Unattended Train Oeration (UTO).

Hoskins says a priority of the modernisation programme has been minimising the impact of the works on passengers, and the only major closure of the system took place over five weeks in summer 2016, when services were suspended to enable the replacement of all turnouts and depot ramps, with all other works taking place during normal nightly engineering periods. In addition to the replacement of pointwork, plain line renewals took place, with VAE receiving a £1.1m contract to supply rails in 2014. SPT also took the opportunity to implement a targeted programme of track geometry improvements.

A two-year £16m programme of tunnel improvements began in June 2015 under a contract awarded to French engineering company Freyssinet. Working in four-and-a-half-hour maintenance windows, engineering teams inspected and cleaned all 14.6km of tunnel, 14km of trackbed and 2800m2 of drainage channels, while applying 3000m2 of grout to the tunnel walls. SPT says this project has achieved all of its objectives, including enhancing the structural integrity of the tunnel lining, reducing water ingress and improving water management. Potential water ingress is continually monitored because of the line’s proximity to the River Clyde, with tunnels running between 2m and 35m below the river’s high-water level.

“Doing all this within the constraints of an underground system with small tunnels and limited access points has been challenging,” Hoskins says. “In the two-and-a-half years it took to reline the tunnels we had up to 200 people working in the tunnels every night and we didn’t overrun on a
single possession.” 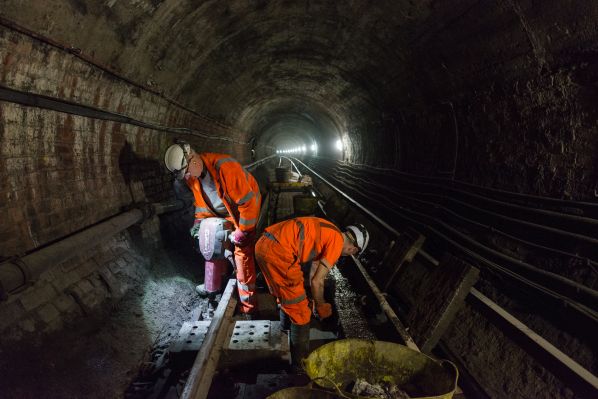 In March 2016 SPT awarded a joint venture of Stadler Bussnang and Ansaldo STS a £203.2m contract to modernise electrical and mechanical systems on the Subway. Ansaldo STS’ share of the contract is worth £104.3m and encompasses CBTC and automation technology, communications systems, a new operational control centre, platform screen doors and depot test track, as well as system integration, acceptance and maintenance support services. Stadler is supplying a new fleet of 17 four-car metro trains, which will be equipped for (UTO).

The 1970s modernisation brought the introduction of Automatic Train Operation (ATO) with the driver operating the doors and starting the train. Under ATO, trains can notionally operate at up to 54km/h although in practice speeds are much lower due to the line’s sharp curvature and other limitations of the infrastructure.

The current train fleet comprises 33 powered driving cars built in 1977-1980 and eight unpowered intermediate trailers, which were added to the fleet in 1992. These are formed into 13 three-car trains, each accommodating 108 seated and 165 standing passengers. The new four-car trains accommodate 118 seated passengers including 12 on tip-up seats and 204 standees (at 6 p/m2) and will also accommodate wheelchairs, a first for the Subway. At 39.25m, the new trains will be 1.51m longer than their predecessors.

SPT currently requires 12 trains to operate the peak timetable, with six trains running in each direction to provide four-minute headways. However, with fixed block signalling and only one spare train, there is little flexibility in the system to handle sudden peaks in demand, such as football matches at Ibrox Stadium. With the delivery of the new trains and moving block signalling, SPT will be able to operate eight trains on each loop, reducing the minimum headway to three minutes.

The new trains are being built at Stadler’s Altenrhein plant in eastern Switzerland. The first set was unveiled at InnoTrans in September and delivery to Glasgow is expected within the next few months. Another two trains will be delivered for type testing in Glasgow. The fleet will replace the current trains on a “one-in-one-out” basis. 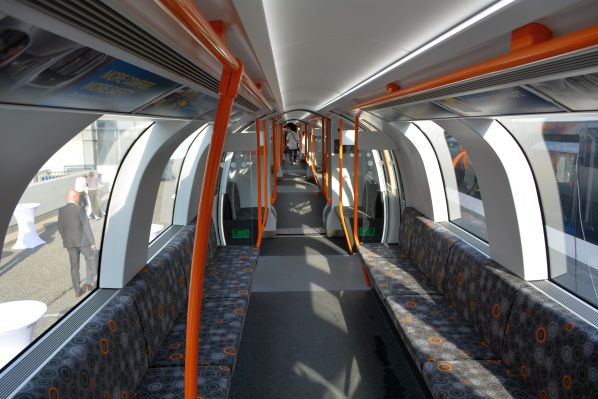 Interior of the new Stadler train for Glasgow Subway.

With the arrival of a modern train fleet, SPT is seizing the opportunity to migrate from scheduled to predictive rolling stock maintenance. Onboard condition monitoring systems will check the status of doors, traction motors and other systems, and notify the depot automatically if a fault is detected on a train.

As part of the upgrading of the depot at Broomloan, condition monitoring equipment is being installed to measure wheel profile to predict when tyre turning will be needed. The depot is being equipped with a wheel lathe, which will reduce wheelset downtime - currently SPT dispatches wheelsets to Wabtec’s facility in Doncaster for reprofiling. Stabling and dispatch functions at Broomloan depot will be automated as part of the modernisation programme and a new wash plant will be installed which will be configured for operation with trains running in UTO mode. Construction is underway on a new Operational Control Centre on the site, which is due for completion by mid-2019.

The unique technical nature of the Subway means dynamic testing of new trains will only be possible in Glasgow. A 760m-long test track at Broomloan, which was constructed as part of the previous modernisation programme, is being upgraded with CBTC and a platform equipped with PSDs to enable on-site testing of the Stadler trains.

With the completion of the modernisation programme, the Subway will become the first metro line in Britain to migrate from ATO to UTO and SPT is currently developing its transition plan in close consultation with Britain’s rail regulator, the Office of Rail and Road (ORR). Before the start of the modernisation programme, SPT reached an agreement with unions on more flexible working and Hoskins says the authority has consulted the workforce closely over the last five years, and continues to do so, on what will be the most significant operational change in the system’s history.

“UTO means we can deploy staff in a different way,” Hoskins says. “We are trying to encourage staff to come with us on this journey, and it’s not always easy, but we’re constantly communicating with our employees about the transition, which ultimately is about improving things for the passenger. We’re delighted with our 97% customer satisfaction score and it’s important that we keep that friendly Glaswegian approach to customer services when we automate. Speaking to the staff, we don’t see the need for a staff presence on every train, and we’re looking at a more flexible approach to this.”

Like the builders of the Subway 120 years ago, SPT is harnessing technology to develop an urban rail system that is more closely aligned with the needs of the city above. The modernisation programme is delivering a more attractive, efficient and flexible Subway with the capacity to meet growing demand in the decades to come.