Back to the future for spoked wheels

Spoked wheels made from austempered ductile iron (ADI) are being tested on a metro train in Germany. As Franz-Josef Weber, head of systems development and bogie engineering with Siemens, explains, ADI offers the chance to reduce mass, wear and sound radiation. 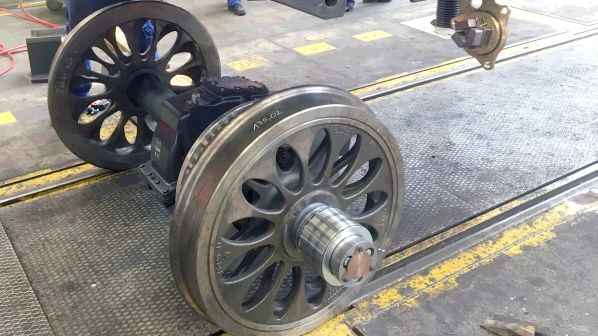 A wheelset fitted with an ADI spoked wheel developed as part of the Shift2Rail research initiative.

A critical factor is the wear between the wheel and the rail, which, in addition to the dynamic behaviour of the vehicle, is strongly influenced by the material which the wheel is made from and the quality of the wheel surface. Wheels are also responsible for a significant portion of the noise emitted by the rail vehicle.

Railway wheels today almost exclusively have steel wheel rims. These are either mounted as tyres on the wheel body or contained within the wheel. The steels used have a similar material makeup as the rail: carbon steel in different temper. Steel as a wheel material has prevailed due to its high hardness and wear resistance. In addition, steel has a high fatigue strength with a high ductility, and the properties in the wheel contact point can be selectively influenced by high-quality heat treatment of the wheel rim.


The use of steel as a wheel material and the optimisation of manufacturing processes limits the freedom of design.

However, the use of steel as a wheel material and the optimisation of manufacturing processes limits the freedom of design by the wheel web developer. Wheel webs are axially symmetrical, and can only be achieved through complex mechanical processing deviations. Due to the forging and rolling process, the wheel only has one web.

While iron casting is often used in spheroidal graphite cast iron for general mechanical engineering and vehicle and energy technology, it has not yet played a role as a wheel material. The main reason for this is the high demands placed on the wheel at the wheel contact point.

For a full wheel, a material is needed which brings both a high strength and wear resistance in the wheel contact point as well as a high ductility and fatigue strength in the wheel’s web. Austempered ductile iron (ADI) is a heat-treated ductile iron with twice the strength of conventional spheroidal graphite cast iron and the same elongation at break. ADI combines high fatigue resistance, wear resistance, toughness, and lightness with freedom in designing components and good machining properties.


The construction of the wheel also offers increased safety as the structural functionality of the wheel is maintained even if a spoke fails.

In comparison, according to EN13262, the European wheel material ER8 has a tensile strength in the wheel rim of 860 to 980N/mm², a yield strength of more than 540N/mm², an elongation at break of more than 13% and a Brinell hardness greater than 245HB. The values of ausferritic spheroidal graphite cast irons are therefore quite comparable.

The use of a cast iron material offers greater freedom in designing the wheel web. This possibility was used in the current wheel design instead of an axisymmetric wheel web through process-related mandatory forging and rolling and, as they are present in many cast wheels, a wheel web was produced with numerous openings. The remaining spokes are distributed over two largely parallel rows on the outside and inside of the wheel. As a result, the space is used optimally in terms of design strength. Due to the rearrangement of the flow of forces from one spoke to the other, wheel forces can still be transmitted when a spoke fails. The construction of the wheel also offers increased safety as the structural functionality of the wheel is maintained even if a spoke fails.

An additional advantage of a spoked wheel is its low sound radiation. This is due to the bell effect of the wheel web as a noise radiation membrane does not occur at the spoked wheel.

Thus, the spoked wheel design, which has been developed as part of Shift2Rail’s TD1.4 Running Gear Demonstrator project, addresses all three objectives of reducing mass, wear and sound radiation.

The release of a new wheel material is not regulated by European standards, while the European norm 13262 provides a reasonable framework for tests to be carried out. In addition to tests on small samples taken from the component, for example for tensile strength, tests on components on a 1:1 scale are necessary. Excellent testing methods are available for wheel fatigue tests. It is also possible to test large components with high load cycles in a reasonable time. Such a test was carried out on four wheels.

In the meantime, more wheels are being tested on a train on the Nuremberg U-Bahn. If the testing continues to be successful, the test will be extended to a small fleet of trains.