Sky’s the limit for Bane Nor

With time to conduct maintenance precious, Norwegian infrastructure manager Bane Nor is looking at how autonomous drones could improve the efficiency of maintenance activities. David Burroughs hears how the company’s plans are developing. 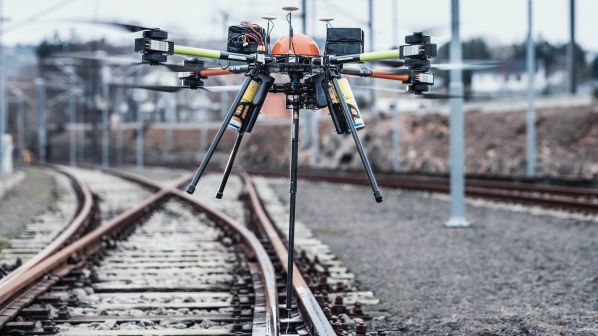 Bane Nor has successfully deployed drones to monitor rock falls and landslides and is now developing the technology to support every day maintenance tasks.

MANAGING, operating, and maintaining a 4200km railway network is no small feat - especially in Norway’s tough climate and often remote mountain terrain. With inspection intervals limited, infrastructure manager Bane Nor is trying to think outside of the box to identify new ways to optimise management of infrastructure using existing and new systems and hardware.

Among the new infrastructure inspection methods in use are drones. With significant strides in drone technology in recent years, Bane Nor’s head of smart maintenance - switches and crossings, Mr Jørgen Torgersen, says the technology could soon be undertaking a variety of inspection and maintenance tasks across the network.

“The main incentive for that is we can inspect our railway infrastructure without needing to stop the trains,” Torgersen says.

In December 2016, Bane Nor signed a framework agreement with Total Traffic Assistance, IRIS Group Nordic and Nordic Unmanned, covering the use of drones to map and photograph natural hazards such as landslides, slips and floods affecting the railway.

Under the agreement, the three companies were able to be on-site with a drone and a pilot within eight hours of an event, providing valuable insight into the scope and scale of an incident.


The small pocket drones, which Torgersen expects could soon become as common as a spanner in an engineer’s toolbox

“It’s not used on a daily basis for inspection of catenary or traction current system or switches, it’s more for larger accidents like landslides or rocks or trees, more natural disasters because (drones) are much safer and cheaper than using a helicopter,” Torgersen explains.

Following on from the success of the framework agreement and building on the partnership with Nordic Unmanned, Bane Nor has begun developing and testing a range of drones for day-to-day use, including maintenance, pocket and inspection drones.

The small pocket drones, which Torgersen expects could soon become as common as a spanner in an engineer’s toolbox, are fitted with cameras and can be used to inspect high, difficult to reach or dangerous places. The drones, which must be operated via Visual Line Of Sight (VLOS), can also be used to inspect lines while they are in use without disrupting services.

Inspection drones are intended for routine examinations of the assets through a pre-defined flight and inspection path. They are larger than pocket drones and carry more advanced systems such as thermographic cameras and Lidar in addition to a high-resolution camera. The system can be operated Beyond Line Of Sight (BLOS) and can be programmed to follow a predetermined route while supplying information and data that can then be fed into a data pool, allowing better maintenance planning and fault prediction.

The development of inspection drones is already underway in other sectors and Bane Nor is working to tap into this expertise.

Maintenance drones, which Torgersen has supported the development of for the last 18 months, are proposed for routine maintenance, such as lubricating switches. These drones, supplied by Nordic Unmanned, are able to follow a pre-defined flight, inspection and maintenance path. From the outset, Bane Nor has designed the drones to operate within the “dynamic profile” of the railway, between the overhead catenary and the track. Much like a “clever bird,” the drones are able to sense a train approaching and move out of the dynamic profile to allow it to pass.

Larger and more expensive than inspection drones, the maintenance drones are equipped to carry both a multi-sensor payload for inspection and train avoidance, as well as a task-specific maintenance payload. Torgersen explains that for safety and precision-maintenance reasons, the drones are designed to operate automatically and autonomously without pilots, taking off and landing from an automatic drone garage that also charges the batteries.

The development of inspection drones is already underway in other sectors and Bane Nor is working to tap into this expertise.

For example, Statnett, Norway’s state-owned electricity grid manager, has developed the pocket drones to inspect its network and is working on creating inspection drones that could prove beneficial for Bane Nor.

“We don’t need to reinvent the wheel, we can copy them and do the same ourselves,” Torgersen says. “That’s the main reason why Bane Nor is doing development on the maintenance drones, because we feel that with the inspection drones and the use of pocket drones, we can learn from the best. We don’t need to develop that.”

Bane Nor first tested the maintenance drones in April 2018, when a drone flown by a pilot was successfully used to lubricate a switch on a test track. Only two months later, in June 2018, Bane Nor successfully used an autonomous drone to complete the lubrication, a feat accomplished in high winds and broadcast on national television.

After proving the concept with the prototype, the company is now developing the drones for commercial use and in April filed a patent for the maintenance drone. Full testing is expected to begin in the fourth quarter of 2019, while commercialisation of the prototype is planned for 2020. A small test rollout is planned later in 2020, while a larger rollout is due in 2021 and Torgersen says the drone will be sold commercially through a newly-created independent company.

“We will not just develop that for use in Bane Nor, we will sell this to others internationally,” he says. “That is part of the agreement I got with Bane Nor when I delivered this innovation. Bane Nor owns their own rights to it, but it will be a different company that takes this international.”

As drones inevitably become more common on and around the railway, regulations governing their safe operation will need to be established alongside the development of the drones themselves. The maintenance drones will need to be approved by both Norway’s Civil Aviation Authority and the Norwegian Railway Authority, while the inspection drones will also need approval from the Civil Aviation Authority.

But while others in the development of new technologies might see regulation and restrictions as a hindrance, Torgersen says more regulation is exactly what is needed.

“For railways, heavy regulation on drone traffic is wanted - it’s not the enemy, it’s a friend because you really want to have geo-fencing around your stations and around your network so that hobby drone flyers are not permitted to use this flight corridor,” he says. “Some people think that regulations are bad for innovation and for railways but I strongly believe it is the solution because we have to ensure that the airspace above the railways is clear of other flying objects.”

Torgersen says a major advantage of the drones is their ability to collect and transmit data, and the possibilities with today’s sensor market are near endless. The drones can be equipped with a compass, GPS, camera, thermographic camera, Lidar and radar, among others. Combined, the various sensors can help the drone perform a myriad of tasks including providing a trove of information to the rail traffic control centre, flying along a predetermined path, sensing and avoiding obstacles and approaching trains, performing maintenance tasks, and gathering inspection data that is transferred back to the asset management analytics platform.

Speaking at the IoT and Big Data in Rail conference in Munich in May, Torgersen explained how autonomous drones could be combined with a smart maintenance programme to deliver autonomous maintenance.

“We want to simplify maintenance,” Torgersen says. “If we can have a switch that communicates with a robot or a drone, it could sort of self-repair at the highest level of maintenance. The analytics platform is connected to the drone, and the analytics platform can say ‘hey I need you to inspect me or I need lubricating because I am experiencing high friction,’ and there is also the data that the robot gathers, so it can also send measurements and all sorts of information back to our analytics programme.

“The reason we think this is clever is because today, during the two-and-a-half-hour inspection time we have at night, we have to compete with manual inspections with people walking the tracks, we have to compete with people lubricating the switches, and we have to have the ballast and the heavy machinery. So they all compete for the same time slots and that’s not optimal. What we think is more optimal is we have inspection and lighter maintenance during the daytime so we can use the night for proper heavy maintenance like grinding and welding and changing the ballast and sleepers.”