SPANISH infrastructure manager Adif has awarded a number of contracts for the extension standard gauge tracks south along the Mediterranean coast from Barcelona to Tarragona and Valencia. 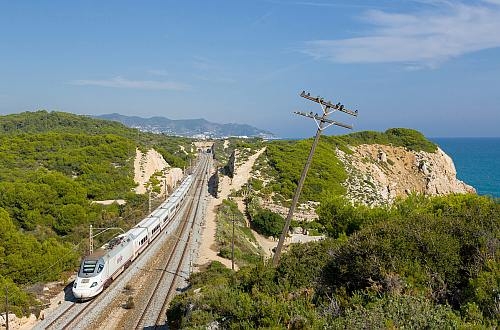 The latest contracts to be awarded total around €60m and cover the installation of dual-gauge track, adaption of overhead catenary, and civil works to increase the loading-gauge and lengthen loops to 750m. These works encompass the section from Castellbisball near Barcelona to the Seat car factory at Martorell, and the adjoining stretch from Martorell to Sant Vicenç de Calders.

During May and June Adif awarded several contracts with a total value of €122.4m to adapt track on the 103km Valencia – Sagunto – Castellon section, which involves converting one of the two existing tracks to dual-gauge and the other to standard-gauge only.

Additionally, in late May a Siemens-Bombardier consortium was selected as preferred bidder for a €73m contract, which was signed last week, to adapt signalling and communication systems and to install new compatible interlockings on the 97km section between Castellbisball, Sant Vicenç de Calders and the port of Tarragona.

As track circuits will not be activated under dual-gauge operation, the Asfa national train protection system will now rely on axle counters on the upgraded sections to monitor track occupancy.

Spanish traffic controllers are already familiar with dual-gauge operation, as two short sections of the conventional line connecting the port of Barcelona with France were already equipped in late 2010 with compatible interlockings, which allow mixed operations of 1668mm-gauge and 1435mm-gauge services.

The Spanish government plans to invest more than €1.4bn in the extension of standard-gauge tracks along the Mediterranean coast, with international rail traffic expected to reach Tarragona in 2015.