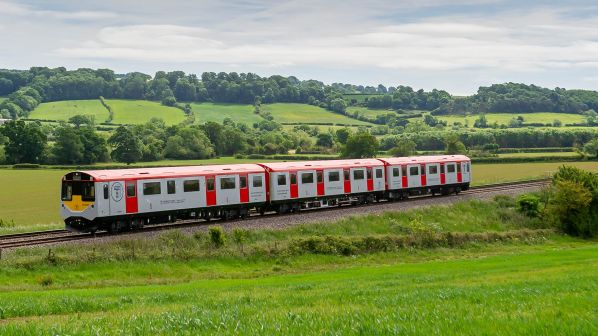 Vivarail’s BEMU is a development of the battery-diesel trains recently delivered to Transport for Wales. Photo: Fraser Pithie

CLIMATE change affects everything we do. As a consequence, transport has some very big decisions to make although it is arguable that many of these decisions should already have been made. The challenge is to reduce carbon emissions whilst developing and improving the railway.

New technology, better experience, cleaner air all have a role to play, but the biggest challenge is that these changes need to happen quickly, and be implemented at a rate never seen before.

It is clear that the rail industry can play a significant role in Europe’s overall ambitions for net zero carbon emissions by 2050. Whilst electrification - with some caveats - can and will make a real difference, there will always be large parts of the network which are too costly for electrification, particularly for areas with low density services. Regardless of country or region, the percentage of non-electrified routes may be anything between 20 and 50% of a network - only Switzerland has managed to achieve 100% electrification. Electrification is therefore a significant challenge, and as low-density routes may also have some of the oldest rolling stock, it is more important these lines are developed with appropriate alternatives. This is where different power systems can be applied to make a difference.

The ambition to remove diesel powered trains is a significant challenge for alternative power technologies particularly when whole life cost is considered. How can railways electrify their networks quickly and how can the extremities of the network be electrified when the costs are prohibitive for low density routes?

The answer for a net-zero carbon railway is electrification by different means.

During the past five years, Vivarail has developed a vehicle platform which considers the train and its charging interface as a system, and has produced a diesel version, as well as hybrid and battery electric multiple units (BEMU).

Vivarail currently has the only battery and battery-hybrid trains fully approved for passenger operation in Britain and has a company policy to build no more diesel trains. This bold assertion is because of the work Vivarail has done over the past six years to develop battery applications for rail.

The majority of the power banks’ energy will be sourced from the network overnight, generally from renewable sources.

The battery train platform has responded to the challenge that battery trains cannot operate for any significant distance or recharge in the time needed to offer a credible alternative to diesel trains. The Vivarail BEMU is a simple development of the company’s recent hybrid platform: a 50% battery and 50% low-emission diesel train system, such as the three-car trains recently delivered to Transport for Wales.

The 100% battery train has no other power sources and offers a range up to 150km. It can be recharged in less than 10 minutes: it is an EMU but powered by different means. However, with strategically placed charging stations the train can operate continuously, and range is no longer an issue.

To achieve what is more or less an EMU platform, Vivarail has looked at the way it charges the trains and manages the transfer of power from the grid using sustainably sourced electricity which it collects when it is available from the network. This is then stored in trackside battery banks which store the power needed to recharge the train in a very short space of time.

Battery banks are used for several reasons, but their primary role is to make power available on demand to the train. The local electricity grid may not have the power required available at all locations, especially in outlying areas, so the power banks will be charged to store energy downloaded when it is available, and at a rate the network can accommodate.

The majority of the power banks’ energy will be sourced from the network overnight, generally from renewable sources, which will produce electricity regardless of demand and then store it in the power banks ready for use.

The battery banks can store significant amounts of energy which the trains will access using direct contact-charging from short sections of conductor rail installed between the running rails. These sections are only energised when a train is correctly positioned, and a handshake between the train and power banks allows the automatic transfer of energy without any driver intervention.

The train contains a battery management system which constantly tracks each cell and monitors its usage and performance. This allows the train to dictate to the battery banks exactly how much power it needs at each location and only takes the energy it requires.

This avoids the batteries being over-used as that would ultimately reduce battery life.

The number of battery banks and their distribution depends on the line, its topology, gradients, number of stations, dwell time, line speed, capacity and several other modest, influencing factors. But as a simple illustration, a 150km line which would cost around £1m per km to electrify, would only need three Fast Charge power banks. While each line and service pattern is different, a Fast Charge installation would cost roughly 10% of conventional electrification on average but would deliver the same result: an electrified line that can be operated by any type of BEMU.

Power banks and the speed at which they can transfer power to the train are the key to introducing battery-electric trains. There are other routes where discontinuous electrification may be exploited, allowing the trains to take power from the catenary where it is available. However, the physical constraints of the catenary and the power required by the trains would not be a complete alternative as fast charge rates require large amounts of energy in short timescales.

Vivarail’s battery system has been available for almost two years and it has yet to see an application in Britain, despite prototypes carrying out successful test operation. Unlike some regions in the EU, Britain has not funded demonstration projects to show its capabilities. It is an unexpected consequence of innovation that a proven technology has not been adopted and demonstrated as a new technology which means battery-electric trains have yet to be specified. But, more importantly, it is not within the remit of either Network Rail or Britain’s Department of Transport to procure a test service.

Once the technology has been demonstrated on the network it is likely the market will become more widespread and the need for subsidies will disappear. However, the government could accelerate the adoption of BEMUs by introducing legislation restricting the use of diesel trains in urban areas much earlier than their planned date for removal.

Potentially this could simply be encouraged by introducing different access charges based on the cleanliness of the traction system, a simple change that would make the case for operators to adopt new emission-free technologies.

As Vivarail defines itself as more of a technology firm than a traditional train manufacturer, it has now developed a traction package that can be used to upgrade existing good quality diesel units to become battery trains. The traction upgrade would see all existing equipment removed and replaced with:

From a climate perspective, earlier removal of older diesel fleets should be a priority but simply scrapping trains that have many years of life remaining makes no sense environmentally. The traction upgrade package is therefore designed to keep the ‘good’ bits and upgrade the polluting bits - it’s a concept that Vivarail has proven with its class 230 trains which are based on former London Underground District Line trains.

Vivarail’s success in battery technology has now attracted worldwide interest, and the first order for a battery train was from Railroad Development Corporation in the United States. The two-car BEMU will be shipped across the Atlantic shortly and will be used to demonstrate the potential for this technology. The train also has a virtual platform which guests can use as they travel on the train to show how the technology works.

Other non-British projects for fast charge and battery-electric train fleets have been delayed by Covid-19 but are now starting to move ahead. For example, a 600km line has been identified to operate BEMUs with intermittent Fast Charge stations along the route. Once operational, this line will demonstrate conclusively that by using Fast Charge, battery trains are no longer constrained by range, which will be the game changer for this technology.

The time to act on climate change has already passed. COP 26 in Glasgow in November will be the next opportunity to review where the world is with respect to climate change and decarbonisation. Vivarail will have a three-car battery electric train at COP 26 to demonstrate how the system can be the backbone of a sustainable railway. The train will operate daily from Glasgow Central. If you are attending the conference, take time to visit the train to see how alternative power can truly make a difference. Fast charge is not a research project, it is here, it works and - potentially - it may be a game-changer.