Rapid advances in battery technology and the drive to reduce emissions of harmful particulates are helping to push the case for the development of battery-electric trains. Keith Barrow looks at the technology behind Bombardier’s prototype Talent 3 battery-electric multiple unit, which will enter service in Germany next year. 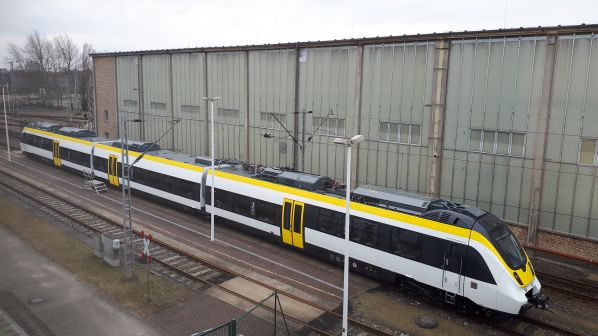 The prototype BEMU at Bombardier’s Hennigsdorf plant near Berlin.

IF the figures for sales of electric cars are anything to go by, electromobility is rapidly becoming a part of everyday life for a growing number of European citizens. The market for electrically-charged cars (including hybrids) in European Union (EU) and European Free Trade Area countries grew by 47% in the first quarter of 2018, with Germany leading the switch. The shift in the bus sector is even more dramatic - a report earlier this year by Bloomberg New Energy Finance forecast that sales of electric buses will account for 84% of the total global bus market by 2030, with e-buses set to achieve a lower total cost of ownership than conventional buses by next year.

Of course, many European railways adopted large-scale electrification long before the catastrophic impact of burning fossil fuels became apparent. But as the need to rapidly reduce particulate emissions grows more pressing, and other modes make rapid progress towards electrification, the pressure is on for rail to move decisively towards the elimination of the remaining pockets of diesel operation.

Germany steadily extended rail electrification throughout the 20th century, but today nearly 40% of the network is still diesel-operated. The recently-formed coalition government has pledged to extend electrification to 70% of the network by 2025, wiring a further 3300km, but beyond this date much of the network will remain unelectrified. With the cost of installing catenary running at more than e1m/km, electrifying many secondary lines is unlikely to be cost-effective.

Battery-electric trains are nothing new in Germany, but a lack of continuous technological improvement meant the concept ultimately fell out of favour. In 1896, Palatinate Railway built a battery railcar with a 2.3-tonne 12.6kWh battery, offering a catenary-free range of around 4km. In the 1950s, German Federal Railway (DB) introduced a fleet of 232 single-car battery railcars, which remained in service until the mid-1990s. The class 515s were equipped with a 20-tonne bank of lead batteries with a total capacity of 350kWh, providing a range of around 300km. Despite the relative success of these trains, the evolution of battery-electric rolling stock fizzled out in 1981 with the abandonment of the DB’s ETLO 528 battery-electric multiple unit (BEMU) project, which failed to advance beyond the study phase.

A quarter of a century on, concern about emissions from diesel engines, huge advances in battery technology and the successful deployment of energy storage systems on light rail vehicles meant the potential of battery trains was being actively explored by rolling stock builders, operators, and governments. In September 2016, Germany’s federal Ministry of Transport and Digital Infrastructure (BMVI) agreed to contribute €4m through the National Organisation for Hydrogen and Fuel Cell Technology (Now) to match-fund a €8.7m Bombardier-led project to evaluate the viability of replacing DMUs with BEMUs on secondary lines.

The Technical University of Berlin is providing scientific and technical support for the project, including an operational concept for the demonstrator train. Associate partners in the project include train operator DB Regio Alb-Bodensee and Baden-Württemberg state transport authority NVBW.
According to Mr Stefan von Mach, Bombardier’s chief engineer for the Bombardier Talent 3 battery train project, Germany is fertile ground for this technology - of the country’s 450 diesel-operated lines, 80% are less than 100km long and 44% are less than 40km.

The demonstrator is a new 56.2m-long three-car Bombardier Talent 3 EMU, which has been equipped with the company’s Mitrac battery system, a heavy-rail development of the Primove technology designed for bus and light rail applications. The total weight of the four roof-mounted battery modules and converters on the demonstrator train is 6.9 tonnes. Von Mach says the battery system has no negative impact on the dynamic behaviour of the train and aerodynamic performance has been validated in wind tunnel tests.

The train will draw charge solely from the 15kV 16.7Hz ac overhead electrification via the pantograph, with a cycle time of 7-10 minutes for a full 1MW charge, although the regenerative braking system will also be used to charge the battery. “We looked at other options for charging, but overhead electrification is proven, you don’t need extra charging infrastructure and you can transmit a lot of power with one standard interface,” Von Mach explains.

The Battery Talent 3 has an output at the wheel of 2MW under overhead electric and 1MW in battery mode, with maximum acceleration of 1.2m/s² in both configurations. Bombardier says the equivalent DMU would offer an output of just 800kW. Von Mach suggests that switching from DMUs to BEMUs on non-electrified lines would therefore offer performance benefits such as shorter sectional running times that could help to strengthen the business case for battery trains.

The train will have a maximum speed of 160km/h under the wires and 140km/h in catenary-free operation. Energy costs are calculated to be €0.65/km at 2016 prices, compared with €1.00/km for a DMU and €0.55 for an EMU, while CO2 emissions from the BEMU are estimated to be 17.7g CO2 equivalent/seat/km (based on 40% renewable energy in the 15kV ac supply), compared with 21.3g for a DMU. This equates to a 17% reduction in CO2 emissions, based on Germany’s current rail energy mix.

“This is almost a plug-and-play solution, with the same performance and the same parameters as a standard train,” Von Mach says. “The only difference is the additional equipment on the roof. The dc/dc converters interface with a standard propulsion system. We wanted this to be as close as possible to a standard EMU.”

The demonstrator will have a catenary-free range of around 40km based on a duty cycle with frequent stops at stations on a relatively level line, although Bombardier is targeting a range of up to 100km for the series train. “Battery range depends on topography, so it’s important to consider the specific nature of each line and how you achieve optimisation between the charging infrastructure and the battery,” Von Mach explains. “It may be that you need one or two extra charging stations on some lines. We would always recommend a total cost of ownership evaluation to show what the advantages of battery operation would be in a specific scenario.”

Data on the status of the battery is fed via the Energy Management System to the Driver Advisory System, which helps to optimise catenary-free range and battery life by recommending an efficient driving strategy via the Driver-Machine Interface.

Von Mach says the battery system will be virtually maintenance free, requiring only occasional replacement of air filters. Battery lifespan is estimated at 5-8 years, depending on the application and duty cycle. In Germany, battery disposal is the responsibility of the vendor, although Bombardier says much of the battery box can be reused.

Development work began on the Talent 3 battery train in September 2016 and the design of the demonstrator train was frozen in March 2018. Work is now underway to certify the train in line with the Technical Specification for Interoperability for Locomotive and Passenger Rolling Stock (TSI LOC & PAS). The authorisation process for operation on the German network will begin in the first quarter of next year and the train will undergo trials in the Ulm area for a year from mid-2019.

As well as reducing the requirement for diesel operation, Von Mach notes that BEMUs might also offer some advantages over conventional EMUs, including the ability to operate independently in the event of a power outage in the overhead electrification, enabling discontinuous electrification on routes with limited structural clearances, and obviating the need for catenary and high-voltage cables in depots and yards. “There are many soft advantages besides energy and cost efficiency,” he explains. “In some situations, a BEMU might be more cost-efficient than buying a multi-system train, and cross-border operations are an interesting area. It means new through services can be introduced, and tenders can be structured in a more flexible way. In Germany, regional diesel networks and electric networks are often tendered separately. In the future it may be possible to create synergies by combining these networks with a standardised train fleet.”

Like other alternative traction concepts, battery trains are not without their complications. However, the technology is rapidly reaching a degree of maturity where it offers a viable alternative to diesel traction on regional routes with competitive lifecycle costs and significant operational and environmental benefits. The trials in Baden-Württemberg should help to boost the case for the wider deployment of BEMUs in Germany and beyond.