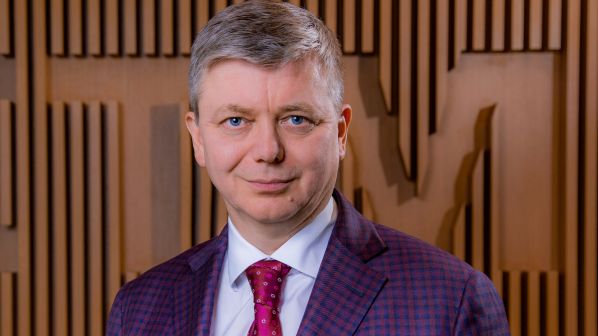 Joining the Association of American Railroads could be key to entering the US market, Viktor Lesh says.

INTERNATIONAL expansion is very much in the sights of Russian manufacturer Sinara Transport Machines (STM), according to CEO, Mr Viktor Lesh.

Lesh told IRJ that the company hopes export orders will account for 30% of its business after 2024. He is prioritising expansion in the Indian market, where the company already has a strong presence selling track machines and equipment despite strong competition from Chinese competitors, as well as in the CIS countries, Africa, Latin America, and even the United States.

“In 2020 we joined the Association of American Railroads,” Lesh says. “Being a member of this association means that we expect to introduce technology to support construction, repair and maintenance of the track at the highest international level in a relatively short period of time.

“Of course, we will have a big task to do on product certification. The transfer of engineering solutions and technologies is a very long and complex path. It is not easy. Our extensive experience, competencies and highly qualified employees provide us with the confidence that we will be able to propose new technical solutions to these new markets very soon. We are very flexible and that is what the year 2020 proved to us.”

Indeed, adaptability was at the heart of the manufacturer’s response to the Covid-19 pandemic. STM was founded in 2007 and employs approximately 30,000 people over 24 industrial sites and over 60 service centres in Russia. Lesh says STM closed its plants for about two weeks at the start of the crisis, taking the time to adapt the working environment to introduce social distancing and sanitisation programmes so it was safe for staff to return to work.

Significant work also took place to stabilise the supply chain. “I would say the main result of 2020 was the fact that we were able to organise ourselves in a different way,” Lesh says. “We have organised our cooperation in a new way and we have developed a new understanding with our key partners.”

Although 2020 posed significant challenges, the company’s financial results, which were announced on February 10, were described as “stable,” and included consolidated revenues of Roubles 106bn ($US 1.4bn), including from the Sinara-Siemens Ural Locomotives joint venture.

In total, the manufacturer produced more than 1600 items of railway equipment in 2020 for both domestic and foreign customers. This includes 138 electric locomotives, 77 diesel locomotives, 196 Lastochka (Swallow) EMUs and 1193 track maintenance machine components and specialist vehicles.

STM also began constructing a new plant at Ural Locomotives’ Verkhnyaya Pyshma site to manufacture high-speed trains from 2024 under an agreement signed between STM’s shareholder, Mr Dmitry Pumpyansky, Russian Railways (RZD) and Siemens in October 2020. Ural Locomotives will supply 42 360km/h high-speed trains for use on the Moscow - St Petersburg line with local media citing the value of the contract at Roubles 175.7bn.

International orders worth €90m were reported including three contracts with Indian Railways for 24 track machines while the manufacturer delivered eight TEM9 and TEM7A diesel locomotives to Kazakhstan. The company confirmed on March 5 that it had formed the STM Kazakhstan subsidiary in partnership with Kazakh Eurotrans Group, which takes a 25% share in the new company, and will target the supply of rolling stock and track maintenance equipment to the country.

Lesh says the company’s research and development efforts led to production of eight new products for rolling stock, electric and diesel locomotives, and track machines during the year. Perhaps the most notable achievement, however, was the culmination of improvements to the production cycle that have taken place over the last few years as the company has embraced lean production methods, which have helped to reduce the time to complete orders by 20%.

“The time for preparation of each product has decreased significantly, and significantly because of the digitalisation of the production process,” Lesh says. “For diesel locomotive production, the key decision was the shift to a platform approach. We managed to provide our customers with very efficient models for their orders and at the same time the production process was organised so that customisation decisions for each product could take place in the very, very last stage.”

As for 2021, Lesh says as the effects of the pandemic persist, both passenger and freight operators face a difficult task to return to the levels of traffic witnessed in 2019. However, he says STM’s strong relationship with RZD as a leading supplier of track construction and maintenance equipment leaves it in a good position to profit from upcoming investments in railway infrastructure. He is also hopeful of securing orders for locomotives for intermodal rail freight traffic, with demand for transport in this sector growing at a much faster rate than other freight commodities.

The acquisition of rail welding and grinding company RSP-M, which was also confirmed in 2020, will help the company become more responsive to RZD’s rail maintenance needs. Lesh adds that expected investments in urban rail infrastructure in Russia prompted STM’s decision to acquire a 49% stake in Vagonmash, a joint venture of Kirovsky Zavod and Skoda Transportation, in July 2020.

STM plans to transform Vagonmash’s plant in St Petersburg into a key production site for the STM Trading House joint venture it founded with Skoda (Sinara-Skoda) in December 2019. The venture subsequently secured a major contract from Moscow light rail operator Mosgortrans in October to supply 90 low-floor LRVs and is now targeting contracts in St Petersburg, Taganrog, Chelyabinsk and other cities, aiming to become their leading supplier of rolling stock. Lesh says the goal is to start supplying an entirely new metro train to Moscow and other cities from 2024.

“The acquisition of Vagonmash is the logical final step in setting up the business for the full cycle production of trams, metro trains, trolley buses and electric buses,” Lesh says. “We’re sure that the competencies of Vagonmash and our joint venture with Skoda are enough to supply this market for the next 10-15 years.”

While the expansion into urban transport is focused on the domestic market, Lesh is hopeful of finding new markets for one of the company’s key innovations: LNG locomotives for both mainline and shunting applications.

Work on the LNG project began in 2012. The first GT1h-002 LNG locomotive was manufactured under an agreement between Sinara Group and RZD, and is now in service on the Sverdlovsk railway. The 8.3MW locomotive weighs 300 tonnes and has a 750km range without refuelling. It can operate at up to 100km/h, hauling up to 18,000-tonne trains.

STM has also started work on developing a gas-reciprocating shunting locomotive, TEMG1, for Gazpromtrans. The locomotive will be certified in the coming months, enabling STM to start mass production.

Gazprom has invested significant resources to optimise the refuelling stations and infrastructure for LNG. Work has also taken place to establish the legal framework for operation of the locomotives.

“We now have the complete technical solution for freight locomotives fuelled by LNG,” Lesh says. “RZD are very interested in this as they are keen to use locomotives that have a minimal impact on the environment. However, we see the biggest orders coming from the private operators and the industrial railways. Many of these companies have already shifted their road vehicles to use alternative energy. Now it’s the turn of their railway vehicles.”

Lesh is hopeful that demand for clean and sustainable railway products will prompt uptake in other markets, adding that the company has received “serious interest” from potential customers in India, Nigeria and other African countries.

Export is also a target for autonomous rail vehicles with STM participating in several key projects in this sphere. Lesh reports on a successful project with Siemens to develop an autonomous shunting locomotive over the past seven years at Luzhskaya station on the October Railway.

“Improved synergy with local producers offers benefits in both the local market and for global cooperation.”

An exciting project is also underway to introduce Automatic Train Operation (ATO) at Grade of Automation (GOA) 4 on the Moscow Central Ring Line, which could be activated for commercial traffic later this year. Ural Locomotives has supplied Lastochka EMUs for pilots of the entirely Russian developed solution, which have taken place over the last two years, with partners including RZD research subsidiary, NIIAS. “By the end of the 2022 we will be able to produce a train according to the GoA3+/ GoA4 standard,” Lesh says.

“Together with our partner RZD International our goal is to introduce autonomous infrastructure and operation to the global market,” Lesh continues. “I think we spend 2021 and 2022 working on this ahead of wider application the following year, which we hope that the city of Moscow proceeds with. Of course, a project like this requires a large investment, but it could potentially double passenger traffic on the line by reducing the frequency of trains to three minutes, and also in the future synchronise with the Moscow Central Diameter line.”

RZD currently accounts for 75% of all STM’s business, but Lesh sees demand growing from other Russian customers as well as from abroad, with contacts with current and prospective customers in 30 countries.

Many of these markets, in particular India and the United States, require domestic production. Lesh says STM has established relationships with key partners in India enabling it to meet the Make in India requirements and he says all the countries where it is working the manufacturer is actively developing similar relationships.

In Russia, Sinara has a 20-year history of partnerships with international suppliers, notably the close relationship with Siemens. In 2020 the two companies celebrated the 10-year anniversary of the founding of their partnership under which they have manufactured 188 electric trains and 183 2ES10 and 2ES7 electric locomotives.

Russian government policies to encourage domestic industrial competence has led to significant changes and progress in the domestic railway supply sector over the last five years. Indeed, Lesh emphasises that localisation of production is a major opportunity for domestic firms and is proving beneficial to Sinara.

“By properly organising the supply chain in Russia, we have become the supplier of one of our technical partners abroad,” Lesh says. “Improved synergy with local producers offers benefits in both the local market and for global cooperation.”

The partnership with Siemens has proven extremely beneficial to the company’s efforts to modernise over the last 10 years. However, Lesh says it was always conducted with the understanding that STM is a Russian company and that the products should become Russian products. Armed with a strong portfolio of solutions, STM has big ambitions and it is certainly a rolling stock supplier to watch in the next few years.