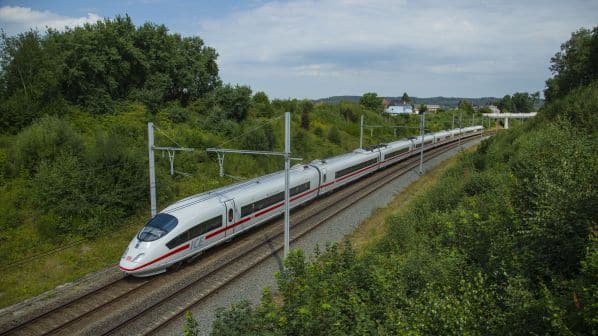 Siemens is looking to make its data more widely avilable in the hope that other manufactuers will do the same, creating a more open system. Photo: Siemens

THE rail sector has been undergoing a radical process of digitalisation in recent years. Analysis of data collected from systems large and small is facilitating a step change in the way that trains and infrastructure are operated and maintained.

However, there is currently only limited standardisation covering how data should be collected and used. Software is usually tied to individual suppliers and specific systems often acting in isolated silos rather than as part of a larger ecosystem, limiting the overall benefits to users.

Siemens Mobility wants to change this by making its data available and compatible so that other manufacturers, operators and even third parties such as universities could make use of it to optimise the way trains and infrastructure are managed.

The revised focus began five years ago, ahead of InnoTrans 2018, when the managers of Siemens Mobility asked themselves “what does technology actually mean for rail?” says Siemens Mobility CEO, Mr Michael Peter. At the time, Alstom and Siemens were pursuing a merger, and the company was exploring what differentiated it from its rail sector competitors. The answer, Peter says, is that while they saw other OEMs as mechanically focused, they envisaged Siemens Mobility as a technology-first company, supported by the wider Siemens group.

“We have within the big Siemens family a lot of what we call corporate core technologies,” Peter explains. “Whatever we invent, we make it available for all the other business units in Siemens and [the other units within] Siemens do the same. They spend … a huge amount on things like Artificial Intelligence (AI), and they give us that knowledge. So there’s a lot of knowledge in the company that other rail companies don’t have.”

Digitalisation can also be used to enhance timetables to increase capacity, and also provide information for passengers to use to improve their journey.

The merger with Alstom was ultimately blocked by the European Commission over competition concerns, with the French manufacturer instead going on to acquire the rail division of Bombardier in January 2021. Remaining on its own, Siemens has turned its focus to expanding and diversifying its offer, including purchasing Software as a Service (SaaS) inventory management, reservation, and ticketing software provider Sqills in August 2021, all while striving to put digitalisation at the centre of all that it does.

Under Siemens’ vision, lifecycle costs are reduced through the use of digital twins, while availability is maximised by using predictive maintenance and AI to optimise maintenance schedules. Digitalisation can also be used to enhance timetables to increase capacity, and also provide information for passengers to use to improve their journey: from finding the cheapest ticket to rebooking their seat to a less busy train, for example.

These are not novel ideas. Many rail industry actors are pursuing the same goals as Siemens by gathering and analysing data to improve operation, optimise maintenance, reduce costs and increase availability.
However, in practice this is forcing operators and infrastructure managers that possess a range of fleets or systems provided by a variety of suppliers to purchase and use multiple proprietary systems and software suites, which often do not talk to each other.

While some operators have begun developing software systems that can be laid over the top of these individual systems to combine them into one, they are still not as smooth as the original systems.
Recognising this inefficiency, Siemens is looking to improve the standardisation and compatibility of its data for use by any management system, effectively enabling any company, including Siemens’ competitors, to integrate the data gathered from a Siemens train into their own management systems.

There is currently no reciprocal requirement for these manufacturers to make their data openly available. But Peter says this is a gamble that Siemens is willing to take, and one where it is betting that its in-house technological knowledge will give it a competitive advantage.

How open this data will become will still be dictated by the end customer, but Peter explains that Siemens is at the very least looking to introduce the capability to share this information. Peter is also counting on open data to drive innovation in the sector, and suggests that operators could work with outside agencies such as universities to come up with new ways of processing and using the data.

“It’s possible that customers specify in future that the whole industry has to go this way, and we can start connecting things to each other,” he says.

This commitment to open, compatible data forms part of Siemens Xcelerator, an “open digital business platform” launched by the Siemens parent group. This involves the creation of application programming interfaces (APIs), a way for two or more computer programmes to communicate with each other, to create software that is more modular and can be connected with other software developed by either Siemens or third parties. Peter says the logical progression is to move this software into the cloud, which reduces the installation burden and makes software solutions more widely available, especially for smaller companies and operators.

“What that means for the end customer is that the entry barrier from a financial point of view is very, very low,” Peter says. “They don’t have to do a specification, go for a public bid and pay €10m for custom made software. Instead, they go in the cloud, set parameters for how they want to use the software and pay per usage. Even small or medium-sized operators can start using it basically tomorrow.”

As well as making it easier for Siemens’ software and systems to communicate with third party systems, the supplier is also looking at ways it can improve communication between its repository of software systems that cover everything from train and infrastructure maintenance to journey planning, ticketing and reservations.

Peter explains that connecting these systems will provide benefits for operators, infrastructure managers and passengers. He outlines a scenario where an AI system uses data to detect that a point machine will fail within a week, allowing the infrastructure manager to schedule the maintenance when there is the least impact. However, he says it is possible to refine this intervention further. For example, the operator can use a transport planning system (TPS) to use the data from the AI to develop a new timetable to minimise disruption. If a compatible reservation system has been used, the TPS could use data from this system to prioritise busier trains, or analyse possible onward journeys for passengers to calculate a timetable that results in the least disruption.

The reservation system could then use this new timetable to identify which passengers need to be notified that their train has been cancelled or disrupted. It could also offer to rebook them onto another service.

Peter explains that each individual element of this system is already in use, but no customer yet uses all the systems concurrently.

“This is really a big step for rail because you must remember that we all grew up with proprietary systems,” Peter says. “Brake pads are sometimes proprietary, they are optimised to make as little noise as possible for a certain weight of train, so they are different from train to train. Everything has been proprietary in the past, and I think it’ll make a huge difference for operators and passengers.”

Peter says that while the 9-euro ticket in Germany has demonstrated that people will respond to low-fare rail travel, it has also shown that limited information can lead to overcrowded trains during peak periods and half-empty trains at other times of the day.

“It is very easy to have a train that is 100% full and another that is half empty if the operator doesn’t know what train passengers are booked on because they have a ticket that can be used on several trains,” he says.

While Peter argues that operators and infrastructure managers will benefit from all suppliers releasing data, Siemens itself needs to cooperate with its sub-suppliers.

Peter reports that Siemens is working with its partners to standardise the data generated. For example, if Siemens is looking to develop an algorithm to track when a door is likely to fail, it needs to work with its door suppliers to identify what data it needs. Ideally, this can then be standardised across all fleets. Peter says there is also a benefit for SMEs as they gain access to a wider range of data, not just directly related to their product.

“Frankly speaking, especially in rolling stock, many of our competitors are smaller and they cannot afford to develop everything themselves,” Peter says. “For example, I didn’t develop Amazon Cloud, I use it, so the idea behind opening [our systems] up is first of all to create the possibility for every company to participate in this game and make a bigger, better rail system.

Siemens is taking a bold first step towards opening up the data market within the rail industry, but it clearly believes the outcome is worth the risk. However, for this initiative to really pay off it will have to convince others that there is both a benefit for them, and for the end customer. The hard work is only just beginning.