Bringing snow clearance in from the cold 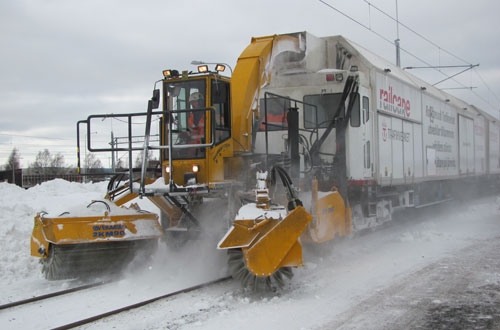 Railcare’s SR700 is put through its paces in Umeå, Sweden.

EUROPE's relatively mild winter might have been a relief to rail passengers who experienced delays to their journeys during the harsh winters of 2009-10 and 2010-11, but it was frustrating for the developers of new snow clearing machines hoping to prove the value of their new equipment.

Railcare, Sweden, and British infrastructure manager Network Rail have both developed snow clearing machines that vary in design and application, but share the same objective: to clear snow from tracks and minimise potential obstructions to rail traffic.

Sweden's transport authority Trafikverket collaborated with Railcare to develop its SR700 machine which was developed especially for clearing snow in marshalling yards and depots. Trials were carried out in and around Stockholm this winter, and while snowfall was down significantly on previous years, Trafikverket's rail traffic safety coordinator Mr Yngve Handspik says that the operator is keen to explore options to automate snow clearance.

"We have been using fairly old but tried-and-tested techniques to clear snow that are enforced as needed," Handspik says. "However, we were heavily criticised for our winter response last year so from a political standpoint money is available to improve the traffic situation in the winter. Unfortunately we have not had enough snowfall in Stockholm this year to prove the true worth of these efforts, but from what we have seen of the Railcare solution it could improve the situation significantly, particularly from a safety standpoint where we will have fewer people manually clearing snow which can lead to accidents."

The SR700 works by sucking up snow from the track and storing the melted snow in two wagons before discharging it at a designated area or into a conventional drainage system.

The machine was developed over a period of six months and consists of a front cab where the operator controls two adjustable brush units situated on the left and right sides. The brushes in the units remove snow and ice from an area of up to 5m in front of the machine. The snow is brushed to the centre of the track and as the machine's brush head and suction unit, positioned behind the cab, passes over, it sucks up the cleared snow transferring it to a tank in the first wagon.

The tank is heated by a 12MW generator to 25oC which melts the snow and ice so it can be easily pumped to a 50m3 storage tank, which is insulated to prevent the water from refreezing. From here water can be easily emptied into conventional trackside drains or a designated area, with a complete discharge taking 7-8 minutes.

With up to 600 trains passing through the Stockholm area every day, the region's yards and depots are busy at all hours. Railcare Group CEO Mr Ulk Marklund says that Sweden's mainlines are generally cleared effectively using existing high-capacity snow ploughs. However, Railcare identified an opportunity to develop a machine designed specifically to prevent the build-up of excessive snow and ice in marshalling yards and depots, where regular train movements often make manual snow clearance a hazardous process and existing methods of snow clearance often cause damage to track materials.

SR700 can operate for up to 25 minutes before drainage is required, and there is scope to add more units to extend the operating time if required. The system is also relatively efficient; it uses 1 litre of diesel to clear 1m3 of snow, and takes two minutes to heat the water tanks up to 25oC.

Trafikverket's trial of the Railcare SR700 is set to continue over the next two winters with a decision then expected on whether it will purchase any additional machines. Railcare is also keen to market the machine to other countries that experience significant snowfall.

Winters in Britain are generally relatively mild, but heavy snowfall in recent years has caused havoc on the mainline network. Infrastructure manager Network Rail (NR) was widely criticised by the media and public for its apparent inability to cope with accumulated snow and sub-zero temperatures in December 2010, and consequently made funds available to improve its response.

These funds were initially allocated to build six snow and ice-treatment trains that would be used to treat conductor rails on the densely-trafficked third rail network in the southeast of England. In addition, in May 2011 NR also decided to develop a machine that would speed up the process of clearing snow and ice from points. NR reliability improvement specialist Mr Tony Jackson, who is part of the National Maintenance Reliability Team, developed the concept for the machine which was built by NR's Traction and Rolling Stock team in Derby.

Jackson says that in contrast with the Railcare solution, the objective of the NR machine is to blow hot air to melt snow and ice. He says that the system of brushes used by the SR700 would not be effective in Britain because of the signalling equipment on and around the track, and the Train Protection and Warning System (TPWS) grids which are situated at the centre of the track. His team also had to be conscious of Britain's restrictive loading gauge.

"The problem for us is that we cannot simply blow snow to embankments because we do not have enough clearance for trains to pass like in other countries where the loading gauge is a lot wider," Jackson says. "Snow ploughs are designed to move the snow and often a lot of it is left.

We therefore decided the best possible solution was to melt the snow and let it drain through the ballast."

Jackson says that his team effectively started with a blank canvas when coming up with the design for the machine. The train formation consists of a locomotive at either end, a Mk2 coach accommodating the train manager and four staff, and a bogie wagon that contains the snow-clearance equipment, including four steam generators, four hot air blowers, a compressor, two water tanks, a fuel tank, and a generator.

The machine works by blowing compressed air from two blowers situated at each end of the wagon at 9000 CFM over the track and points. Tests have shown that this system is capable of melting all of the snow and ice up to 1.8m either side of the blowers, which is sufficient to include conductor rails. Jackson says it was decided to utilise the existing track drainage because temperatures rarely fall low enough in Britain to freeze the ground to the point where water will not drain away. Using hot air has the added benefit of thawing the ballast in a short period of time, reducing wear and tear and extending the life of the infrastructure. It also avoids using chemicals which might be harmful to the environment.

The machine has a maximum transit speed of 97km/h and carries sufficient diesel to operate up to 16 hours across two eight-hour shifts. Jackson says that it could potentially clear up to 644km of track during a single run.

Work on the prototype was completed in February with trials carried out near Inverness, Scotland. And while there was no actual snow to clear during these tests, Jackson says the results were positive in demonstrating the machine's de-icing capability and proving that its use would not have any lasting effects on infrastructure such as lineside cabling.

"The only modifications we identified were under-estimated power consumption and the need to upgrade the power generator pack to a higher power rating," Jackson says.

As for the machine's future, Jackson says that NR is evaluating the business case for additional machines. He also says that with the CCTV fitted to the prototype, it is possible to observe the blowers from the coach, improving operator safety, and with further development it might be possible to convert the machine to conduct other seasonal functions such as blowing leaves in and around tracks. This will mean that NR will not have to wait until Britain's next harsh winter to see the benefit of the new machine.

"It might be that we develop a central pool of the machines that operators can request when they are required on certain routes that are badly affected," he says. "It is very rare that the whole of Britain is affected by snow at any one time, it tends to be regional. But with a fleet of machines positioned strategically, we can meet these requirements."