THE sustained growth in public transport usage in Brussels in recent years has mirrored a rapid increase in the city's population, which swelled from 960,000 in 2000 to 1.14 million in 2012 and is expected to reach 1.31 million this year. 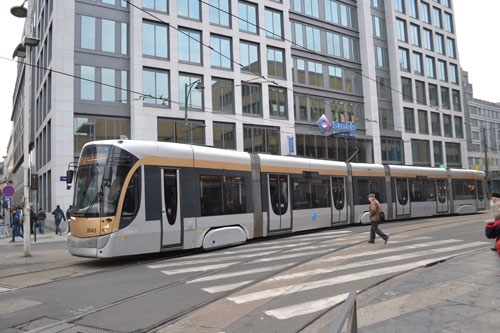 Brussels Transport Company (Stib) carried 348.8 million passengers on its buses, trams, and metro trains in 2012, with trams accounting for 35% of journeys and the metro 38%. According to the company's projections the upward trend is set to continue with ridership rising to 400 million by 2016 and 550 million by 2025.

Stib already appears well-positioned to meet the growth challenge with one of Europe's largest tram networks, covering 203km (including pre-metro lines), and a 40km metro network, but traffic has increased to such an extent in recent years that parts of the system are approaching saturation point.

This means the priority for the remainder of this decade will be building more capacity into the network, extending the reach of tram and metro lines while relieving the bottlenecks in the existing system. Under Stib's 2013-2017 public service obligation contract, which was agreed with the Brussels-Capital regional government last March, €4.4bn will be invested in public transport projects in the city by 2022, drawing funds from a variety of sources including the federal and regional governments, public-private partnerships, and Stib's own revenues.

A key project for the next five years will be the automation of metro lines 1 and 5, which saw ridership increase by 102% between 2000 and 2012. In March last year Stib introduced a 2 minute 30 second-interval service on the shared Merode - West station section, which provided a 20% increase in capacity on the busiest part of the line, but with passenger numbers still on the rise, Stib is planning to install communications-based train control (CBTC), which together with the acquisition of new rolling stock will support conversion to driverless operation within 10 years.

Stib recently sent a specification to shortlisted suppliers, including Alstom, CAF, and Siemens, for a fleet of 43 driverless trains for lines 1 and 5 which will be procured as part of a framework deal for up to 90 trains. The CBTC contract will also be tendered as a framework contract, which will include an option for the automation of lines 2 and 6.

Both the rolling stock and train control contracts are due to be finalised by the end of this year with the aim of introducing two-minute headways on lines 1 and 5 in spring 2019. By the end of 2020 mixed mode operation will begin and the switch to full driverless operation is due to take place in 2023, when 90-second headways will be introduced on the shared section of the line. Maintenance facilities at Erasmus and Delta will be upgraded as part of the project.

The conversion work, which includes the installation of platform screen doors at stations, will be carried out during four-hour maintenance periods in the early hours of the morning. "The big challenge with this project is keeping the lines running," explains Stib CEO Mr Brieuc de Meeûs. "Because of the level of traffic it will be absolutely necessary to keep the lines open and operating normally during the conversion programme."

De Meeûs says Stib hopes to convert lines 2 and 6 to driverless operation between 2020 and 2025. "This is the logical next step because the signalling on these lines will be obsolete by then. Driverless trains offer us a very large increase in capacity, and that is a priority on the metro network."

Peak capacity has also become a serious constraint on the north-south pre-metro lines, lines 3 and 4, between North station and Albert. Despite the introduction of 43m-long LRVs with wider doors, consolidation of tram routes using the tunnel and the operation of 2 minute 30 second headways, de Meeûs says the line is approaching saturation point.

Technical studies are underway into the conversion of the pre-metro into an automated north-south metro line, which will include the construction of a 4.5km northern extension to serve the densely-populated district of Schaerbeek-Evere. A new metro tunnel will be required on the central section of the route between Anneessens and South station and a new tram tunnel will be constructed beneath Fonsylaan to replace the Constitution tunnel near South station, the oldest tram tunnel in Brussels, which dates back to 1958.

Construction of the extension and conversion of the pre-metro is expected to begin in 2018 and the €570m project is due to be completed in 2022. Stib estimates that the northern extension would be used by around 6000 passengers per hour per direction.

Light rail projects also feature prominently in Stib's investment plans. The 3.3km Line 9 will run largely on a dedicated alignment between Simonis metro station, Brussels Hospital, and an interchange with the planned RER station at Hauts de Jette. Construction is expected to begin later this year on the €50m project, which will take two years to complete.

To the east of the city, Line 62 will be extended 3km east from Bordet to serve the headquarters of Nato and Eurocontrol, while Line 94 will be extended north from the tram museum stop in Woulwe-St Pierre to Woulwe shopping centre and Roodebeek metro station.

Last July the Brussels regional government approved plans to convert the section of bus line 71 between Porte de Namur in the city centre and the Delta public transport interchange in Auderghem to light rail. Construction is expected to begin in 2015 and the 10km line will open in 2018. "Our busiest bus routes are becoming saturated, and they need to be converted to light rail, starting with Line 71," says de Meeûs. "In Brussels we are able to build a kilometre of tram line for €15m, and we are very proud that we can build lines so cheaply, but these are still big investments that need the support of municipal and regional authorities to become a reality."

Stib is modernising its tram fleet with the acquisition 220 Flexity Outlook LRVs from Bombardier, the last of which is due to be delivered next year. While these low-floor vehicles are longer than the trams they are replacing, Stib is considering a range of additional measures to further boost capacity on the light rail system. "We're still increasing frequencies on some tram routes, but parts of the network, particularly lines 3, 4, and 19, are reaching saturation, so we're looking for solutions that will give us extra capacity," says de Meeûs. "We are studying whether we could run 50m or 60m trams with 2.65m-wide bodies, but this is an old network operating on narrow streets, so it will be a challenge to accommodate larger vehicles without a significant impact on street layouts. We also have to consider the impact of longer, wider vehicles on tunnels and depot capacity."

Raising average speeds on the tram network will also be an essential step towards increasing hourly capacity on the busiest lines. "In the city centre the commercial speed is currently 18km/h, but we want to increase it to 22km/h," de Meeûs explains. "Every extra 1km/h we gain is a victory. This means priority signalling for trams and dedicated lanes for trams, which might be unpopular politically, but these measures will be necessary if we are to move more people."

With the expansion of the LRV fleet, Stib is investing in new maintenance facilities. A major new tram depot is being constructed at Uccle in the south of Brussels, which will have capacity to maintain up to 10 LRVs at any given time, with stabling facilities for up to 75 vehicles. The depot is being developed as part of the Tramstore21 project, an EU-backed joint initiative involving public transport operators in Rotterdam, Blackpool, and Dijon together with industrial partner Fraunhofer which aims to provide a benchmark for tram depot construction. Particular attention has been paid to integration with the local community, as well as optimising the layout of the site and the energy performance of the buildings.

De Meeûs stresses that the next few years will be a challenging time for Stib as the organisation implements a major capital investment programme, while seeking to maintain or improve upon the stringent service level requirements specified in its contract with the regional government. "The private car will still be important in Brussels, but we want people to see that they can walk, or cycle, or use public transport and that this is a real alternative. We want to be a city that provides multimodal mobility."