C-DAS: taking driver advisory systems to the next level

Integrating driver advisory systems with traffic management systems can unlock a host of opportunities for optimising operational efficiency, but making this connection is not without its complications. Keith Barrow reports from Sweden on how one company is working to bridge the gap. 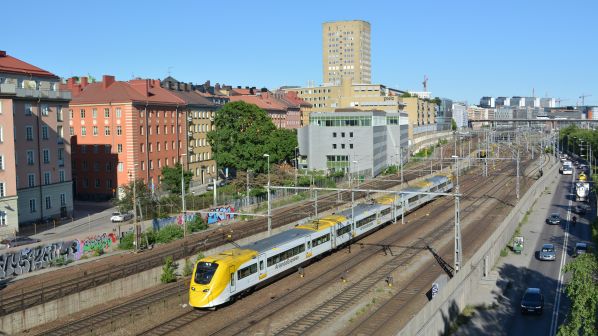 Arlanda Express has been using Transrail’s Semi-Connected DAS technology since 2014.

DRIVER advisory systems (DAS) are rapidly finding favour as a means of optimising the performance of individual trains to reduce energy consumption while ensuring close adherence to the timetable. However, the degree of optimisation varies between systems and depends on their architecture.

Connected Driver Advisory System (C-DAS) takes things a step further by providing a communications link between the DAS and the traffic management system (TMS) in each controlled area where the train operates. In fact, C-DAS can be considered as two subsystems. The TMS defines timing requirements in real time with regards to scheduling and adherence to the timetable, while the DAS defines the optimum driving style within the limits of the timing requirements. Scheduling, routing and speed restriction updates are communicated to the train in real time, while information from the train enhances traffic regulation decisions at the TMS end. The TMS has to focus on managing not only the routing of trains, but also the timing of train movements.

Most DAS systems currently in operation are stand-alone (S-DAS) technologies, which can be deployed by the operator without the need to establish a real-time interface with the TMS or advanced TMS functionality. Operators still have to cooperate with infrastructure managers to obtain data on gradients, distances and timetables for their S-DAS deployments, but gaining access to such static or quasi-static information is less challenging than attempting to establish a dynamic DAS-TMS interaction with real-time data exchange.

From an interoperability perspective, the format and content of TMS-DAS communication will still have to be agreed between stakeholders and could involve a costly upgrade if a legacy TMS is being used.

Main line C-DAS deployments are complicated by the presence of multiple operators, which might have their own perspectives on the relative merits of different DAS systems and their own strategies for deployment. With S-DAS systems offering many of the energy savings desired by operators, some might question the business benefits of C-DAS. Nonetheless, the Optimal Networks for Train Integration Management Across Europe (On-Time) research and development project identified “high interest” among infrastructure managers, train operators and the rail industry in the development of C-DAS systems, and a need for common communications standards, including a standardised data format for transmission between trains and control centres, to ensure interoperability across Europe. On-time dubbed C-DAS Centrally Guided Train Operations (CGTO) and identified different architectures for such systems. As Figure 1 shows, the proper TMS/DAS interface is trackside, not in the air gap.

Four years on from On-Time, DAS-TMS interaction remains a challenge for the wider deployment of C-DAS on main line networks. “A good TMS should provide dynamic data that can be picked up and used by the DAS,” explains Mr Andreas Törnblom, CEO of Swedish rail technology firm Transrail.

Törnblom cites a lack of relevant standards as another significant obstacle to the wider adoption of C-DAS technologies. “Britain is the only country with defined DAS and C-DAS standards but these do not incorporate requirements for the TMS,” he says. “In Sweden we have started the push to straighten out how the TMS should work with the DAS, and we are working alongside [infrastructure manager] Trafikverket on this. This is like dancing a tango - both sides need to take equal steps to make it all come together. If we have symbiosis, and we can put intelligence on the TMS side, we can really move forward.”

In the late 1990s, Transrail began a research project into the development of a C-DAS system with the aim of minimising energy consumption and operating costs while maximising punctuality and infrastructure capacity. The first large-scale tests with the system, dubbed Computer-Aided Train Operation (Cato) were conducted with mining operator LKAB on heavy-haul lines in northern Sweden in 2010 and Transrail commercialised the technology in 2015.

Cato comprises two core elements - one module at the control centre (Cato-TCC) and one on board the locomotive, multiple unit or driving car (Cato-Train). Cato TCC is linked into the control centre’s dispatching system and continuously receives updated information on the dispatcher’s plan, including track maintenance works and speed restrictions. This information is sent to each Cato-equipped train.

Cato-Train calculates the optimum speed profile required for the train to reach its destination on time, targeting the given schedule while simultaneously taking into account other factors such as energy consumption and wear on the vehicle. The optimal speed profile is displayed as an advisory on the Driver-Machine Interface (DMI) screen, enabling the driver to maintain the operational timings, with a high-degree of precision. These advisories are based on actual train characteristics and the timetable, and take into account whether the driver has followed previous advisories. Within the operational timings (the train path envelope) Cato uses all available run time to the next stop to minimise energy consumption.

All of these approaches are likely to offer improvements in performance and efficiency, but Törnblom says prospective DAS adopters need to carefully consider which strategy best meets their requirements before committing to a specific solution. Calculation of advice for strategies 3 and 4 is relatively straightforward, but strategy 5 requires “quite demanding theory calculations and practical implementation.”

Cato can be supplied in different versions for these strategies, depending on the requirements of the operator. So far all systems delivered or under discussion are type 5, which according to Törnblom offers the best performance.

For situations where a C-DAS deployment may be impracticable due to the limitations of the existing TMS, Transrail has developed a Semi-Connected DAS (SC-DAS) which includes operational timings to Cato depending on other trains on the line, using data from track circuits to feed Cato. This system was first adopted by Stockholm airport express operator Arlanda Express in 2014.

Beyond the main line railway, C-DAS is finding favour with urban rail operators. Helsinki City Transport (HKL) recently awarded Transrail, Sweden, and Welado, Finland, a contract to roll out Cato on the city’s metro network. The project is due to be completed in October and is expected to reduce energy consumption by 15-20%

Törnblom stresses that any DAS deployment needs to consider human factors if it is to successfully harness the full benefits of the technology. “Change management is essential for any DAS system - it’s only a tool, so you need to be able to use it correctly to get the right results,” he says. “You are asking a driver to follow advice based on parameters he can’t see, and this can seem counter-intuitive, but overall Cato gives a whole new perspective on eco-driving, because you can quantify each drive and each driver. It offers the possibility to work with drivers in new ways. You can incentivise more efficient driving behaviour in line with the company’s business objectives.”

Configuring the DMI to meet the needs of specific groups of drivers is a challenge for C-DAS projects. “You could have a head-up display like a fighter plane, but would any drivers want it?” Törnblom asks. “Drivers respond best to information on why and how, they want advice not commands.”

The Cato DMI was developed in cooperation with the Department for Human-Computer Interaction at the University of Uppsala, Sweden, and has been designed to ensure that drivers can follow the driving advisories with little or no training. Transrail says the information relayed to the driver respects technical limits and tolerances set by vehicle technicians as well as infrastructure and train control systems.

Törnblom says DMI design will become less critical as C-DAS moves towards the integration of intelligent cruise. “A good C-DAS system still relies on the driver’s ability to read and respond to the advice it generates,” he explains. “The next step in the evolution of C-DAS is therefore intelligent speed control - the driver presses a button and the train moves forward in accordance with the Cato algorithm. Intelligent cruise is going to be a big thing for operators and rolling stock suppliers and it will be really popular with drivers. There is constant speed cruise control on many trains today. It’s time to make the cruise intelligent - in the longer term, this will lead to efficient ATO. Cato Cruise can already be used as Grade of Automation 2 for line haul.”

“Many studies have been done on ATO but often the algorithms that govern traction and braking are rudimentary, so energy usage can actually go up in ATO mode. The next step is to use Cato to enrich standard systems so they can run optimally in ATO mode, and tests have already been set up for this. ATO needs intelligent algorithms that can optimise conditions.”

The fact that Cato remains one of only a few C-DAS systems on the market is a reflection of the challenges outlined above. However, continuous development of the technology by companies such as Transrail and TMS suppliers and the emergence of relevant standards should help to drive C-DAS adoption, enabling infrastructure managers and operators to reap the efficiency gains. “Five years ago we thought there would be more C-DAS deployments than there currently are,” Törnblom says. “Without standards and suitable TMS functionality, any company can claim it has a DAS system. It will get easier to adopt C-DAS when the technology is understood, the systems come with a standard set of requirements, and matching TMS technology is in place. Until then, SC-DAS bridges the gap.”