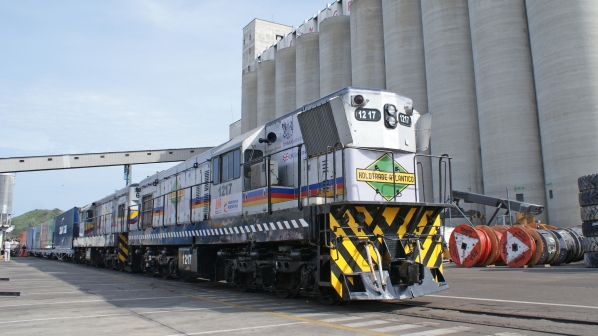 A Holdtrade Atlántico test train at Santa Marta. The operator is hoping to start commercial operations in early 2020.

COLOMBIAN rail freight services could be set for a major boost under plans unveiled by domestic start-up operator, Holdtrade Atlántico, in May.

The recent completion of long-overdue rehabilitation work on the approximately 550km Chiriguana - La Dorada section of the 914mm-gauge line between the Caribbean port of Santa Marta and La Dorada prompted Holdtrade Atlántico to accelerate plans to introduce an intermodal and general rail freight service between the port and Bogotá and Medellín.

A key partnership with OPL Carga, Colombia’s largest road haulage and logistics operator, which moves more than 4 million tonnes of freight annually, is adding to the momentum. Indeed, Mr Leonardo Suarez, vice-president for business development at Holdtrade Atlántico, says the service is now just months from fruition with “customers ready and infrastructure ready.” Work to raise the necessary capital is progressing, and if this is in place by the autumn, the first trains could run in early 2020.

Plans for the project date to 2011 when Colombian president, Mr Juan Manuel Santos, who had previously lived in London, suggested to the British government and industry that investment in Colombia’s railways by British firms would be very welcome.

By 2011 it was clear that Colombia was finally emerging from a long period of instability. The government was busy negotiating peace deals with former rebels. And by 2016, with the peace deals signed, and the government controlling the territory through which the railway runs, resuming operation became a distinct possibility.

Suarez says that Holdtrade UK was originally planning to assist whichever operators came forward after the Colombian government announced plans to rebuild the Chiriguana - La Dorada line in 2011. The line had been severely damaged by flooding from 2010-11. However, while initial plans to rebuild the line in 18 months did not succeed, the Colombian government persisted with funding the project.

The work was conducted by Colombian rail infrastructure manager ANI and involved renewing track and structures at around 70 locations with the project costing $US 120m and taking six years to complete. The line was rebuilt with concrete sleepers and welded rail in 2005 prior to the weather damage, and the section north of Chiriguana is already intensively used for coal traffic by existing concessionaire Fenoco between La Loma and coal handling ports near Santa Marta.

With the infrastructure work proceeding, attention shifted to securing operators for future services. Both the British embassy in Bogotá and the Colombian embassy in London were supportive of companies considering the proposition. Holdtrade decided to investigate further, with the fact that Suarez was from Colombia encouraging the company to proceed.

In looking for potential partners Holdtrade sought rail freight operators with experience of operating short line services. It soon found US-based Iowa Pacific, which became a shareholder in the new start-up in 2013. The company has since provided operational planning and management know-how.

By 2014 Leonardo Suarez had moved back to Colombia to work with the local team on the project, but as he says “everything takes time in Colombia.” Indeed, the planned infrastructure renewal was still incomplete in 2016 when a first intermodal test train consisting of former Colombian State Railway equipment took place.

The test was jointly sponsored by the British government’s foreign economic assistance programme and the British embassy in Bogotá. It was a success despite the infrastructure limitations with all work finally completed in late 2018. The 2016 test train, and others which ran in early 2019, were crucial for Suarez for the project to proceed as “people began to think it is possible that trains will really run again and that something is actually happening.”

During President Santos’ official visit to London in 2016, the project was highlighted to ministers and officials in both governments as a good example of a British company seeking to expand its activities in Colombia.

The British-Colombian partnership extended to assisting the Colombian government to establish the regulatory regime for its railway. Colombian officials visited their opposite numbers at the Office of Rail and Road (ORR) and Network Rail (NR) to learn how the British railway industry is structured.

Road traffic speeds are low in Colombia meaning that the railway’s journey time is competitive.

Suarez is clear that the proposals to revitalise the railway has benefited significantly from the support provided by the British, adding they have been “persistent in their support” and have helped Holdtrade to “gain access to decision makers.”

Suarez describes the railway regulatory model subsequently developed by the Colombian government as “like the UK,” with ANI established as a separate infrastructure manager which provides a network “open for third-party access and competition.” Suarez says “cheaper [freight] transport is the name of the game.”

Suarez explains the aim of the new service is to maximise the use of lower cost rail operation for the long and flat trunk haul part of the route. He also says the new service will provide a reliable means of transport for Colombian manufacturers to move goods to Santa Marta for transfer to one of the country’s major ports.

Road traffic speeds are low in Colombia meaning that the railway’s journey time is competitive even when taking into account the transfer to road for the final leg of the journey. Suarez says Holdtrade’s research shows the average truck operator makes four round trips between the port at Santa Marta and Bogotá in a month. The train, which will replace up to 67 lorries, can cover the road haul part of that distance in roughly a day.

Suarez says the test trains validated timing and operational assumptions. In addition, he says road freight rates are high in Colombia compared with similar countries, which Holdtrade Atlántico believes will enable rail freight rates to be set at a point where all traffic carried should be profitable. It will also offer customers reduced costs compared with current road services. The pre-sale of 50% of the capacity of the planned operation to OPL Carga also offers financial stability during the start-up phase.

Holdtrade Atlántico has developed a seven-year business plan with revenue growing from $US 10m in 2020 to more than $US 145m (at constant prices) by 2026. Suarez says the company expects to achieve gross profit margins in the range of 39-50%.

Initially services will focus on the route from Santa Marta to Bogotá/Medellín. Later phases will include links to Colombia’s other major ports such as Cartagena and Barranquilla using river connections to a terminal at Gamarra, mid-way between Santa Marta and La Dorada.

Suarez says Holdtrade Atlántico has secured train paths and track access rights until 2029 from Fenoco and ANI, and plans to operate up to 10 trains every two weeks. Trains are planned to operate based upon demand and availability of freight, which in part will be driven by maritime container shipping schedules. Suarez says two to three trains per week are planned at the launch of the service.

Services will be operated using a fleet of rebuilt EMD GT22 diesel locomotives, which were originally built for use in Queensland, Australia, plus a mix of flat container and open gondola wagons obtained from South African rail engineering firm Genrail. The rolling stock will arrive in Colombia in early 2020 and initially two locomotives and 51 wagons will be used. The fleet will increase to 13 locomotives and more than 600 wagons by 2026.

The process of raising the necessary financing remains underway. Holdtrade Atlántico has already invested over $US 5m. A further investment of $US 101m is planned to fund capital costs and operational start-up. The company’s technical advisor is Transport Investment Ltd (TIL) with London-based fintech company Envestors managing the planned fundraising. Assuming successful completion of the initial financing later in 2019, operation of freight trains is due to begin in early 2020.