Can a two-car British train start an urban transport revolution in the United States?

Henry Posner III, chairman of the Railroad Development Corporation, explains to Richard Clinnick how the Pop-Up Metro concept using British trains could prove the case for rail investment in the United States. 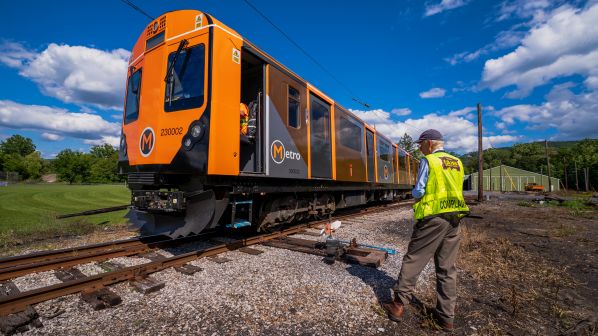 A two-car battery train built in Britain and currently based at the Rockhill Furnace Trolley Museum in Pennsylvania, where it is performing demonstrations on the 2.9km Shade Gap branch of the East Broad Top Railroad, could revolutionise urban travel in the US, says Mr Henry Posner III, chairman of Railroad Development Corporation (RDC), which is a shareholder in Vivarail, Britain.

The train is the central part of a plan to demonstrate the Pop-Up Metro concept, which could prove the viability of lines without the need for expensive infrastructure and brand new trains.
Rebuilt from former London Underground D-Stock, the train arrived in the United States in April and began operating in July.

Speaking to IRJ at the Railtex/Infrarail exhibition in Birmingham, Britain, on September 7, Posner explains that the location was selected because it’s close to the people who are behind the project, and future target markets and decision makers: it’s within a three-hour trip by car from Washington DC, New York, or Pittsburgh. “It’s well positioned in terms of being in a location where you can demonstrate the train and without interfering with somebody else’s operation,” Posner says.

Posner says property development was a major component of the evolution of rail in Britain and Japan and that continuing urbanisation is key for the development of the D-Train’s use in the United States. He refers to The High Line, a former freight railway that was converted into a linear urban park in New York City to great success. “A non-operating freight rail line whose tragic flaw was that it was worth more dead than alive,” Posner says. “So how can you preserve the footprint of the railway and put some of that value back in?

“We could bring a D-Train to the US under temporal separation, but offer the opportunity on a lease basis, so that at different locations you could prove the concept and the market.”

Posner says this would have two effects: the first would be reducing the risk of any project while the second would be to reduce the time taken to implement a project because “to build out a gold-plated, from scratch system, is always longer than a political cycle.”

He says that the overall goal is to make the pie for rail projects bigger by proving the market. Once proven, then it could be possible to completely rebuild the railway, with brand new trains. “But it’s an intermediate step which we do not believe existed until we came up with the idea,” Posner says.

There is a tremendous investment in intellectual property ranging from how to do the conversion to fast charge technology to the temporary platforms.

“What you want is to get something started and then see if it takes on a life of its own, either because there is overwhelming public demand, or, more likely, there is a single local champion either from the public sector or the private sector that can serve as a local partner or business model.”

Posner says the train’s arrival made people take the plans seriously. “One of the great things about the US is we’ve got all kinds of decentralisation in terms of decision making city-by-city,” Posner says. “In each case, you’re dealing with a different infrastructure owner, a different attitude toward transportation, a different transit authority, a different private sector. So what it provides is a highly diverse list of possibilities.

“As much as I’d like to think of it as being like the scene from the Field of Dreams, where the guy builds the baseball field and in the next scene there’s a line of vehicles coming over the horizon, this will more likely be relatively slow on the uptake, because people need to start being aware of it.”

The project remains a British export. “There is a tremendous investment in intellectual property, ranging from how to do the conversion to fast charge technology to the temporary platforms,” Posner says. “It’s our plan to export the UK intellectual property that we have developed together into the US market.”

The Biden administration’s desire to invest in infrastructure, including significant amounts in rail, also provides options. “To decarbonise you can resurrect a railroad,” Posner says. “You can get investment through various corporations.”
Although he stops short of confirming a long-term roll-out plan, Posner says the company could take the train to a planned Pop-Up Metro location within 30 days of an order being placed, a potentially revolutionary proposition for US cities looking for a quick fix to their public transport problems.

“I would not want to paint ourselves in any corner as far as what we might do in terms of how we will sequence either which trains go where, or production,” he says. “But we have proven the ability to produce the trains.

“We have an established manufacturing facility in Britain, the intellectual property is proven. And so then it becomes a question of how quickly you produce the next set of equipment for use in either the UK or the US?”