As passenger habits evolve and more people travel by train, operators are faced with a balancing act between passenger comfort and capacity. David Burroughs talks to Barbara de Jong about how Netherlands Railways is designing its new fleets to meet this challenge. 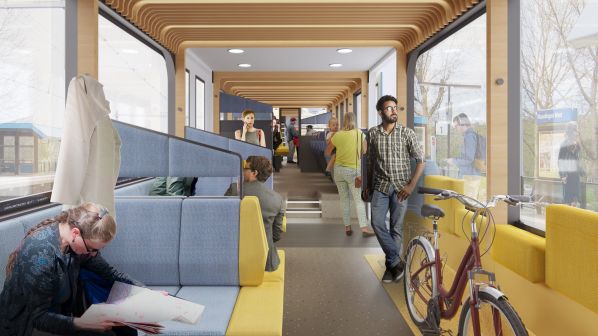 NS’ development of a new interior has steemed from a vision of the interior created in 2018. Photo: Mecanoo

MORE people in the Netherlands are using the train than ever before, with passenger growth expected to exceed the National Market and Capacity Analysis (NMCA) forecasts used by the government in the coming years.

While the Covid-19 pandemic has had an impact on passenger numbers in the short term, growth is still expected in the long term.

To cope with this, Netherlands Railways (NS) has begun the process of ordering a new fleet of high-capacity EMUs, issuing a request for information to select potential suppliers with a view to ordering the new trains in 2022. The 150 - 160m-long trains will consist of double-deck and single-deck coaches, which will both increase capacity and improve accessibility.

But simply creating bigger trains is not the only way NS is looking to increase the fleets’ capacity, with the interior design and seating arrangements also playing a crucial role.

Two parallel projects launched by NS in 2017 will have an impact on these new trains.

The first was aimed at examining the options to replace the existing DDZ fleet, which is nearing the end of its life. The 12-car trains can seat up to 1200 passengers, leaving a major gap in NS’ ability to move passengers if they were to be replaced with anything with a lower capacity. As part of this project, NS looked at ways to redesign the interior to create more capacity.

The second was launched after the board of NS decided to review the operator’s interior design standards. Dutch architectural firm Mecanoo and project designer Gispen were brought in to assist NS, which led to the creation of a ‘joint vision of the train interior of the future.’ This was presented during the Innovation Expo in Rotterdam in October 2018.

“We did a feasibility check on the vision with the rail industry, and we also did a check with people who travel on the train and others such as safety experts to see how feasible that vision really was,”

The vision was designed to set a high bar for interior design across the NS fleet, says project manager, Ms Barbara de Jong, but not everything developed will be implemented. However, with the procurement of the new fleet approaching, certain aspects of the vision have been developed further with a goal of implementing them on the new fleet.

“We did a feasibility check on the vision with the rail industry, and we also did a check with people who travel on the train and others such as safety experts to see how feasible that vision really was,” de Jong says.

Last autumn, NS began working with passengers to get feedback on what they perceived to be an acceptable balance between increased capacity and passenger comfort. This included testing aspects such as pitch, the distance between a seat and the seat back in front of it, to find out how passengers responded to various spaces.

NS also sought input on increasing the seating in first class from two plus one across, as currently used in inter-city services, to two plus two across, as seen on local and regional trains.

“We looked at this together through a really broad research project over the past year,” de Jong says. “We think it’s really important to work with the customer to see how they perceive it.”

NS consulted its NS Panel (see panel below) to receive feedback from 4000 respondents, and also created mock-ups of a first class and second class compartment. Around 500 passengers trialled these before the Covid-19 pandemic, with NS using qualitative and quantitative analysis to gather responses to the new layouts.

As more passengers use the train, their expectations of what level of service they will receive during their ride and what they do with that time are also changing.

Wi-Fi has become standard in recent years, and is installed on virtually all new fleets. But de Jong says there are now passengers who have mobile phone plans with enough data that they don’t need Wi-Fi. On the other hand, power sockets and USB sockets are becoming more important, as passengers begin using more than one device when working on the train.

“The traveller’s needs have changed over time,” de Jong says. “It’s not just one bag, they now have several things with them and we like to change with that and factor that into what we are doing.”

In the past, trains would have provided a variety of seating patterns, but this has become standardised in recent years to resemble an airline, with rows of seats punctuated with table seating facing each other. NS is looking to reverse this somewhat, creating a more dynamic arrangement.

This includes creating quieter zones to allow people to concentrate while working, as well as more active zones to allow them to talk on the phone or to each other in groups, depending on their journey’s purpose. There is also a bigger need for open zones, providing space for passengers taking quick journeys to stand between stops.

One of the modules to progress from the vision stage to the development stage was the concept of high seating.

“You’re sitting a bit higher up so you are a bit more active, it’s an active module, and you have a big table in the middle to work on,” de Jong says. “But it’s also a module that is very attractive for young people to sit around and play a game or talk. It’s a nice way of adding something to the interior. It’s a little bit higher so people say they feel like they are more in their own space, they feel safer and more secure.”

The second module features a window bench with seats similar to bar stools. The seats can be installed to either face the window or in the direction of travel, depending on the manufacturer’s preference. This would provide a space that is easy to get in and out of while also doubling as a work area.

Instead of creating a coach using only the high seating or the counter tops, the idea is to mix them up, installing one module in a coach or in every second coach to provide a variety of seating types alongside the standard airline style seating.

NS’ ticketing system, which doesn’t provide reserved seating, is an advantage here, as passengers are able to choose the seating type that fits best for their journey when they board the train instead of being assigned to a type that may not fit their needs.

Alongside the interior’s physical layout, NS is also reviewing the “feel” of its coaches, by looking at ways to create a warmer, more homely atmosphere for passengers. This is being combined with work to improve the “NS look,” featuring the dark blue and yellow already well known across the NS fleet.

“We do have an identity but we want to change it to the feeling of coming home, with warm and natural colours, but also a pure and modern atmosphere,” de Jong explains.

The new designs, which feature wood and potentially carpet in first class, were also included in the mock-up to generate feedback.

De Jong says developing the new designs is important, as manufacturers have asked NS to provide more guidance around what it is looking for in terms of interior detailing and colours. NS is now working to translate the results from the mock-ups and public consultation into specifications.

However, this doesn’t mean that NS will dictate every detail in the interior, and manufacturers will still have leeway within the specifications and TSIs.

“We’ll say it should be this kind of blue, and we would like the seats in first class to be leather, but we’re not saying it should be leather (on a specific part of the seat),” she says. “What we think is really important is that it should have the appearance of quality. The interior should look like it has a rich quality. And it’s up to the manufacturers to make that happen.”

The new design could also be used if NS undertakes a large retrofit of its fleet. However, the introduction of the new high-capacity fleet, which is expected to be in 2027 or 2028, will likely be the first time the public can experience these new interiors.

WHEN developing an interior that will be used by thousands of members of the public on a daily basis, receiving their input as early as possible can be crucial to guarantee the end design is as user-friendly as possible.

In 2004, NS launched the NS Panel, a group of around 100,000 passengers who signed up to give feedback and review developments on a wide range of issues across the company.

“They really like NS, they say, so they like to work with us on how to evolve NS,” de Jong says. “It’s really broad, and we test a lot of things in there so the questions they get are really diverse.”

Respondents are sent questions around once a month, along with updates on long-term research. The panel members can also be invited to participate in more in-depth sessions, such as the interior mock-ups.

“They’re really empathetic with NS so it’s a great way to help us check the ideas we have and how people respond to that,” de Jong says. “It’s an interesting way of really getting the customer involved in how we evolve.”

While experimenting with ways to improve how panel members experienced the new interiors, NS developed a virtual reality environment that was tested by 80 respondents. “Looking at just a render or a drawing doesn’t give you the sense of ‘what do I feel if I’m really in the train,’ and this virtual environment really gave the customers the opportunity to ‘walk’ through the train,” de Jong says.

The VR system was also displayed at the Dutch Design Week in Holland, where NS gathered additional qualitative analysis from conference attendees.

De Jong says the system is helpful when comparing different designs, as they can be changed to allow respondents to compare designs. “The mock-up was really nice because the customers could sit in it, but the VR gave the opportunity to change things more quickly than the mock-up.”