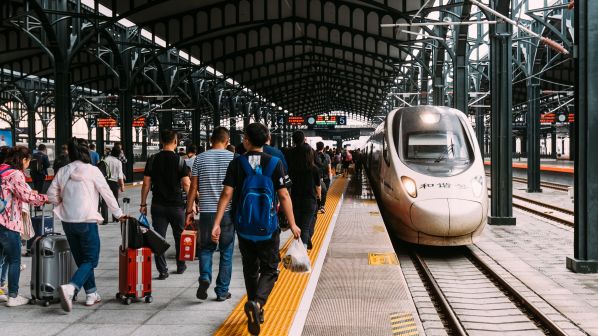 IN three key city clusters: Beijing-Tianjin-Hebei, the Yangtze River Delta, and the Greater Bay Area surrounding the Pearl River Delta. The NDRC says nearly 6000km of the planned networks will be built over the next three years.

China’s rail expansion is part of the government’s efforts to coordinate regional development under the 14th Five-Year Plan (2021-2025). China has already invested heavily in expanding its rail network, and by July 2020 the network had grown to 141,400km with high-speed lines accounting for 36,000km. On August 13 2020, China National Railway unveiled plans to expand the network to reach 200,000km by the end of 2035, of which about 70,000km will be high-speed, effectively doubling the size of what is already the world’s largest high-speed rail network.

Each of the three clusters form significant elements of the government’s national economic strategy.

The Beijing-Tianjin-Hebei region, also known as the Jing-Jin-Ji Cluster or the Capital Economic Zone, is the largest urban region in northern China with a population of about 120 million. It includes the region surrounding Beijing and Tianjin, along the Bohai Sea Coast. The region is steadily growing to become an economic rival to the Yangtze River and Pearl River deltas to the south. In 2019, GDP in Beijing-Tianjin-Hebei hit $US 1.2 trillion, about 8% of China’s total.

While Beijing, as the capital, currently overshadows the rest of the region, this is set to change under the Beijing-Tianjin-Hebei Integration Plan, with the inclusion of Tianjin and Hebei province in a grand project that aims to create a world-class city cluster centered on Beijing.

The plans to upgrade and provide better integration among and between these three regions will increase the pace of urbanisation in China.

As one of China’s economic powerhouses, Beijing’s GDP is more than Yuan 2.8 trillion ($US 428.7bn), with a population exceeding 21 million. However, this pales in comparison with the wider Jing-Jin-Ji region. Currently, Jing-Jin-Ji’s combined GDP accounts for approximately 10% of China’s total GDP and is home to more than 100 million people - 8% of China’s population. In addition to Beijing and Tianjin, there are 11 cities in Hebei province and the entire region covers more than 200,000km².

The Yangtze River Delta is a triangle-shaped megalopolis comprising Shanghai, southern Jiangsu province and northern Zhejiang province, and includes the cities of Hefei, Nanjing, Suzhou, Hangzhou, Shaoxing, Ningbo, and Zhoushan. In 2019, GDP in the Yangtze River Delta was about $US 2.2 trillion. It covers an area of 99,600km2 with a total population of more than 125 million, of which an estimated 95 million are urban dwellers. With about 10% of China’s total population and contributing 20% of the country’s GDP, the delta is one of the fastest growing and richest regions in East Asia.

In September 2020, China’s president, Mr Xi Jinping, visited Hefei, the capital of Anhui province, where he reiterated his goal to advance the “integrated” and “high-quality” development of the Yangtze River Delta. Xi’s speech put the region under the spotlight of China’s great economic development strategic plan. This means the region has now been assigned to lead China’s economic revival in the face of an increasingly uncertain external environment.

The Yangtze River Delta will help to showcase China’s new “dual circulation strategy” (DCS), which is a two-pronged development strategy that seeks to spur domestic demand in addition to catering to export markets to allow domestic and foreign markets to boost each other. DCS will accompany China’s actions to recoup loss of growth momentum due to the coronavirus pandemic.

The Greater Bay Area covers an area of 56,000km² surrounding the Pearl River Delta and includes the special administrative regions of Hong Kong and Macau and nine major cities in Guangdong province: Guangzhou, Shenzhen, Zhuhai, Dongguan, Foshan, Zhongshan, Jiangmen, Huizhou, and Zhaoqing. The Greater Bay Area has a total population of about 72 million and is the largest and richest economic region in southern China with a GDP of $US 1.65 trillion, accounting for 12% of national GDP.

The blueprint for developing the Greater Bay Area was released in February 2018. Internally called the “1+1+9” plan, its aim is to turn the area into a sprawling economic region reminiscent of Tokyo or San Francisco. It could also help to integrate Macau and Hong Kong more intimately with the nine other mainland cities. On May 14 2020, the People’s Bank of China and three other central authorities unveiled new guidelines to support the financial reform and opening-up of the area. This involves 26 new measures aimed at liberalising China’s controls on foreign exchange and foreign currency remittance to boost cross-border capital flows in the Greater Bay Area.

The Greater Bay Area project is well underway and, if successful, will create inter-city rivalries aimed at generating greater investment appeal and a climate of innovation. The plan aims to differentiate the roles of Guangzhou, Shenzhen, and Hong Kong, the largest and most prosperous cities in the region, to build on their strengths rather than directly competing with one another. Shenzhen is expected to focus on technology and development, Guangzhou on transport, and Hong Kong on finance and foreign investment.

The plans to upgrade and provide better integration among and between these three regions will increase the pace of urbanisation in China, while sustaining and fueling regional and national growth and development. There will be opportunities for foreign companies to participate, including the procurement of equipment and the provision of the goods and services required by those using the new railways.