As US trade tariffs begin to bite, China is doubling down on a programme of infrastructure investment to fuel its prodigious economic growth. But as IRJ Pro market analyst Oscar Sinclair explains, this is a risky strategy. 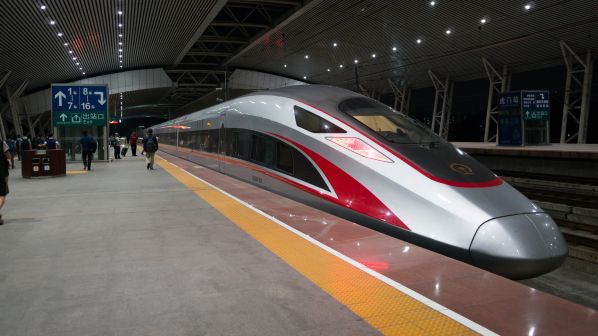 CHINA is set to commence work on projects to expand its high-speed rail network by a further 3200km this year. This is far more than any high-speed network currently operated anywhere in the world and continues China’s rapid high-speed network development programme. In addition, China Railway Corporation (CRC) is set to open 6800km of new lines, including 4100km of high-speed infrastructure, which is 45% more than the total mileage commissioned in 2018.

While the development rate was expected to slow as China closes in on the target of delivering a 30,000km high-speed network covering 80% of its major cities by 2020, the country seems to be once again putting its faith in infrastructure spending as a counter-cyclical tool. China is set to invest more than Yuan 850bn ($US 125bn) in rail this year - the highest amount ever and 10% more than originally budgeted - as the government looks to alleviate the impact of US tariffs and a slowing economy.

Indeed, the renewed determination to invest in rail infrastructure has come as China’s fixed asset investment - one of the country’s key growth engines - slowed to a decade low of 5.9% in 2018.

Over the past decade, China has made significant strides towards achieving its strategic goal of building a nationwide high-speed rail network. China’s first high-speed line was commissioned in 2007 and within four years the country had developed the world’s largest network. By the end of 2018, China was operating 29,000km of high-speed lines, around two-thirds of the world’s total, having added more than 4000 route-km in 2018. The current network has considerably reduced the travel time between major Chinese cities, and the rail authority is now looking to extend new lines into some of the country’s more remote corners.

After the 2008 financial crisis, large-scale infrastructure spending enabled China to fast-track its way from economic recession and promote investment. The use of rail development as a tool to bolster economic growth means that China is now well ahead of schedule to deliver a 30,000km high-speed network, and under the revised plans, the country is now planning to extend the network to 38,000km by 2025 and 45,000km by 2030.

The next wave of investment will promote the so-called ‘eight-by-eight’ grid network of eight east-west and eight north-south corridors, increasing connectivity and passenger flows of the existing four-by-four structure. The plan also hopes to support poverty alleviation in some of China’s more remote areas.

According to IRJ Pro Project Monitor, up to 27 projects are planned to start construction in the second half of this year (Table 1). Among the more notable projects is a second railway between Sichuan and Tibet, a strategically significant line that will have to cross some of the world’s deepest canyons.

A feasibility study is currently underway for the 1700km line that will wind its way across the ‘roof of the world.’ The project is estimated to cost around $US 36bn, with construction slated to start in the third quarter of 2019.

Exuberant projects like this have been built in the past and have been criticised for their lack of economic consideration. One of the high-speed network’s most controversial lines is the Lanzhou - Xinjiang line, which spans more than 1700km. It is estimated to have cost Yuan 140bn and connects with China’s north-western provinces, a land mass larger than Argentina, which is relatively sparsely inhabited.

China is also leading the way in high-speed automation. The Beijing - Zhangjiakou line is expected to become the first high-speed line to be equipped with Automatic Train Operation (ATO). The system has been tested on the Beijing - Shenyang line between July and September last year racking up 186,000km.

Yet despite its ambitions, there are concerns surrounding the level of debt accumulated from delivering China’s high-speed rail investment programme, and the potentially significant financial risk when combined with operating losses from current and future high-speed services.

According to Professor Zhao Jian of Beijing Jiaotong University, the rapid construction of the high-speed network has created a giant liability for CRC and regional governments. CRC reported debts of around Yuan 5.28 trillion in the final quarter of 2018, and it is estimated that as much as 80% of CRC’s debt burden is related to high-speed rail construction.

China’s high-speed rail investments are now widely considered as “grey rhino” investments, with obvious risks that are often ignored. This next massive wave of rail expansion has the potential to overburden local governments and CRC, and with the borrower’s ability to repay these debts uncertain, there is the potential of a debt crisis.

In mid-January, China cut its bank reserve requirement ratio (RRR) by a further 1% for the fifth consecutive time, which released Yuan 1.5 trillion of new loans.

The Central Bank’s RRR cuts are intended to avoid crises by expanding credit funds to help boost the real economy. The majority of these funds will go towards new investments while the remaining Yuan 600bn was used to payback maturing medium-term loans.

However, China’s corporate and government debt pile is on a comparative scale with the railway. Corporate bonds and local government debts account for most of China’s total debt, which has reached a staggering $US 34 trillion and is a potential threat to the stability of the global economy.

The build-up has been rapid with total debt quadrupling in just seven years. And even with a recent emphasis on deleveraging, Chinese borrowing rose 14% in 2017, and is now 266% of gross domestic product.

Many of China’s high-speed lines are dependent on government subsidies, meaning that services currently struggle to pay interest and principle payments on the construction loans. CRC is entirely dependent on subsidies and raises debt to pay off old debts, a negative cycle which many see as unsustainable.

Projects secure loans at sovereign rates, which tends to make the financials feasible as long as ticket prices cover inflation. Refinancing of principle is to be expected in the shorter-term due to the long asset life.

The optimistic view is that China’s companies and governments will simply be able to grow their way out of debt, as the expanding economy supports borrowing, which generates inflation and erodes the burden of debt repayments. The high savings rates and current account surplus both also contribute to China’s long-term strategy.

China still has tools in its arsenal to deal with the rail debt if necessary; these include cutting interest rates, swapping debt for equity through expansion programmes, and encouraging stock floatation.

However, there is still a risk that China’s “grey rhino” rail investments could become a drag on the world’s economy for decades or even trigger a crisis. But such warnings have been sounded for years and China’s credited expansion shows no sign of slowing.

This year’s first quarter growth figures will test some of the country’s key policymakers as the pains of the US tariffs kick in. Growth could fall below the psychological pivot of 6% in the first half of the year, a figure not seen since the early 1990s.

However, if China’s leveraged bet on high-speed rail is successful, it will be true testament to the ambition and power of the Communist Party marshals and Keynesian economics.

For detailed data on rail projects in China, subscribe to IRJ Pro at www.irjpro.com