China will continue to push the boundaries of what is possible in 2020 with new waves of metro expansion and high-speed rail development. Oscar Sinclair examines what lies ahead. 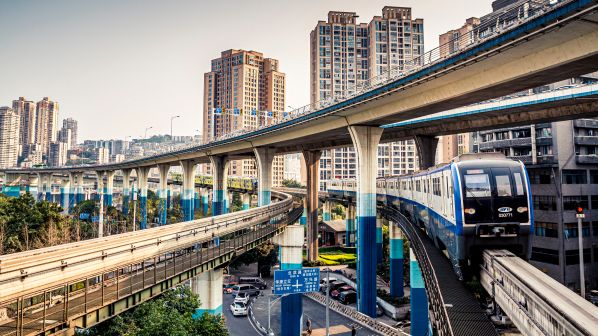 China will continue to push the boundaries of what is possible in 2020 with new waves of metro expansion. Photo: Shutterstock/Stepanov Aleksei

CHINA’s vision of an integrated and sustainable transport system is centred on a network of urban lines and high-speed rail interconnectivity between all major cities. The country has been investing heavily in high-speed and metro projects over the past decade to make this come to fruition with further notable progress expected in the next 12 months.

At the 2019 Yangtze River Delta Rail Transit Integration Development Summit Forum in November 2019 it was announced that China’s rail network will reach 150,000km in 2020.

The current network includes over 30,000km of high-speed line and serves 75% of cities with a population of 500,000 or more. China plans to further extend the network to 200,000km over the coming decade, of which over 45,000km will be high-speed lines.

Since the release of Opinions on Further Strengthening the Management of Urban Rail Transit Planning and Construction by China’s General Office of State Council in July 2018, the conditions required to develop metro projects have been tightened.

Various socio-economic factors such as population density and regional GDP need to be assessed before committing to projects. The promulgation of Opinions was enforced to avoid excessive debt and financial risks.
Many cities’ applications for metro construction have since been pushed back. However, China’s seven megacities - defined as those with a population of over 10 million people in the centre - have not been affected much by the change with smaller regional cities taking the brunt of the squeeze.

Nanjing, Shenzhen and Chengdu are expected to join Beijing and Shanghai with 500km of operational metro in 2020, with Chongqing and Wuhan not far behind. The recent approval of additional phases has ushered in a new wave in metro construction.

Shenzhen currently has 292km of operational line and is planning to reach over 300km by the end of 2019. With 14 metro projects under construction, the highest in the country and the highest number in China’s history of constructing metro projects, the network will expand drastically to more than 500km this year. Shenzhen’s long-term plan is to have a 720km network spread across 20 lines.

Chengdu currently has over 350km of new line under construction and the system is expected to reach 508km by the end of 2020, with nine projects expected to be commissioned. The city’s operational length is currently 226km, ranking it eighth in the country. In 2020, it is expected that it will jump to fourth in the table.

Chengdu is planning to open phase 1 of Tianfu International Airport this year which will have the capacity to handle 90 million annual passengers. The airport will have metro and high-speed line connections.

Chongqing’s distinctive system that passes through buildings and mountains is expected to reach 450km in 2020. Line 9 will open to traffic in 2020, which will add 40.5km to the network.

Guangzhou approved the construction of 10 new metro lines under phase 3 of the city’s Urban Rail Transit Construction Plan (2017-2023). The new phase will add 258.1km to the network and is estimated to cost Yuan 219.6bn ($US 31.28bn). The plan also integrates the inter-city rail network with the rest of the Pearl River Delta region. By 2023, it is estimated Guangzhou’s network will extend to 800km with 18 lines.

Hangzhou is also anticipating rapid development in anticipation of the 2022 Asian Games.

Xi’an’s Urban Rail Transit Phase 3 construction plan (2019-2024) was also approved in July 2019. Phase 3 includes an extension of metro Line 1, which will connect to the city of Xianyang, and the construction of five new lines and two extensions, with a total length of 150km. The projects are estimated to cost Yuan 96.9bn.

Hangzhou is also anticipating rapid development in anticipation of the 2022 Asian Games. The city plans to develop 10 metro lines and four inter-city lines. Once complete in 2022 the city will have more than quadrupled its current active network to 516km.

Yinchuan, Taiyuan, Haikou, Xining, Hohhot and Lhasa are among the provincial capitals yet to develop metro systems. However, new networks are under construction in Hohhot and Taiyuan with these scheduled to open at the end of 2019 and in 2020 respectively.

China’s high-speed network is not only the world’s largest and fastest, it remains the most ambitious with more lines and connections consistently added and the testing of new ever faster train prototypes underway.

The country continues its bold expansion plans with over 11,000km of lines currently under construction according to IRJ Project Monitor and a further 15 projects expected to be commissioned by the end of 2020. The results have come at a high cost, with China investing an average of $US 100bn per year in high-speed rail.

According to the International Union of Railways (UIC), China had a 31,043km high-speed network as of October 2019. UIC predicts that by 2030-2035 China’s high-speed lines could exceed 80,000km, which will pose a big challenge for operators, industry and authorities.

High-speed rail is becoming a favoured mode of transport for the Chinese due to its affordability, comfort and speed. A total of 3.13 billion passenger trips were made on high-speed lines between the start of 2019 and October, a year-on-year increase of 8.9% according to the Ministry of Transport. The ministry has predicted that 3.6 billion trips will have been made by the end of 2019, a staggering increase of 92% since 2012.

China is not only focusing on the expansion of new lines but also automation. Operation on the 190km automated Beijing - Zhangjiakou high-speed line was expected to commence before the end of 2019. The line, which has 10 stations, is being built in preparation for the 2022 Winter Olympic Games and will offer 350km/h operation, reducing the travel time between the cities from three hours to just 50 minutes. The Yuan 53.5bn project was designed and constructed by China Railway Engineering Consulting Group.

China is also intensifying research on maglev technology. China built the world’s first commercial maglev system - the 30km stretch between Shanghai city centre and Pudong Airport - in 2002. The line was developed using German technology and with the support of a German consortium and is still the world’s fastest commercial train system, operating at up to 431km/h.

China is now working to develop even faster maglev technology. In May 2019, CRRC unveiled a prototype maglev train that engineers claim could travel commercially at up to 600km/h. A working prototype is expected to be completed this year ahead of the start of tests in 2021.

China is also planning a ‘super high-speed railway’ that will support trains at 800km/h, rivalling passenger aviation. The proposed 308km line will link Chengdu with Chongqing and would reduce the travel time between the two cities to less than half an hour, supporting China’s plans to form a ‘super city’.

Research is also underway into ‘super maglev’ technology which could operate at 1000km/h or more. Researchers in China are looking at creating what has been dubbed as a ‘flying train’ that will run on maglev technology and travel through a vacuum tube at supersonic speeds of 4000km/h, around three times faster than hyperloop. State-owned contractors Casic currently hold over 200 patents for the project.

The 235km Rizhao - Qufu section of the Rizhao - Lankao high-speed railway is located in the south of Shandong province and runs due east from Rizhao on the Yellow Sea. The Wuhan - Shiyan line is 399km long and has a maximum design speed of 350km/h, although trains will be restricted to 300km/h initially.

This was followed in December with the opening of three more sections of line totalling 1043km: