Chinese high speed: in the wake of Wenzhou

It is one year since the fatal Wenzhou high-speed crash seriously dented China's enthusiasm for high-speed. Construction has resumed, but at a slower pace and in a more cautious way than before, and with concerns over spiralling debt China is now turning to the private sector to invest in rail, reports Han Qiao from China Features. 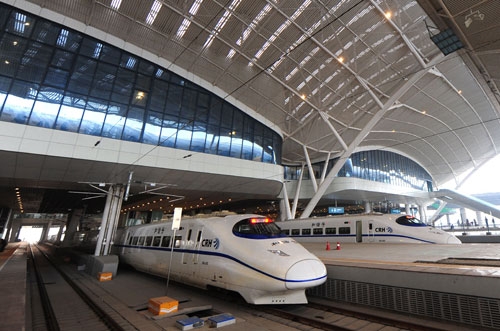 The number of lines operating trains at high speed, which exceeded 9600km in mid-2011, was scaled back to just over 6000km as trains on many lines had their maximum speed cut to less than 200km/h. In addition, only one high-speed line – the 102km Guangzhou - Shenzhen route – was put into service in the second half of last year.

In March the Ministry of Railways (MOR) said that seven high-speed lines totalling 3500km would open by the end of this year. But in late May MOR told China Features that this had been scaled back to 2322km, and opening of the remaining lines might be postponed. Nevertheless, completion of these projects will extend the high-speed network to around 8400km.

The first new line to open, Beijing - Wuhan, will add 1125km to the network. The maximum design speed of the line is 350km/h and, in line with international practice to maintain a safety margin, trains will run at a maximum of 300km/h, says MOR. Nevertheless the journey time between Beijing and Wuhan in central China will be reduced from 10 hours to just four hours.

The new Beijing - Wuhan line will connect with the existing high-speed line running from Wuhan south to Shenzhen, adjoining Hong Kong, so that for the first time Beijing, Wuhan, Guangzhou and Shenzhen will be connected by high-speed trains.

The second new line to open this year is the 293km Wuhan - Yichang section of the Shanghai - Wuhan - Chengdu line, which has a design speed of 200km/h. This will be followed by the completion of this major artery connecting the country's developed east and less-developed mountainous western region, which will allow trains to average 200km/h. Wuhan will then become a new hub of the high-speed network.

Finally, the 904km Harbin - Shenyang - Dalian high-speed line, which runs through China's northeastern region, will enter service. The journey time between Harbin and Dalian is expected to be reduced by two-thirds from nine hours to three hours.

MOR is very cautious about specifying the opening dates for these lines, and won't even say in which month the lines will open, as it is anxious to allow sufficient time for testing and commissioning so that safety is not compromised.

"Two to six months must be allowed for commissioning and dynamic performance testing," says MOR. "After that, another one to three months must be given for test running. All new lines must go through these procedures before being put into operation."

MOR has set up a new department called Major Projects Management Centre to supervise high-speed railway construction and other important projects. MOR says it will "shoulder the prime responsibility in major railway construction projects and will streamline the responsibilities of itself, local railway bureaux and railway companies." This change is in response to the two major causes of the Wenzhou accident: management failure and faulty signalling equipment.

Enthusiasm for high-speed, both from central government and financial institutions, waned after Wenzhou. China set itself a target to raise Yuan 500bn ($US 79bn) for both high-speed and conventional line development this year. But in the first four months, MOR only invested Yuan 89.6bn, down 48.3% year-on-year.

Debt has remained high in the railway sector. MOR, the main investor in China's railway projects, reported a loss of Yuan 7bn in the first quarter, with its debt-to-asset ratio standing at around 60%.

To bring more high-speed lines into service, the cash-strapped MOR issued a guideline in May, considered to be by far the most open and detailed in the sector, inviting private investors to participate in rail projects.

In this document, MOR says it will treat private investors impartially when they invest in railway projects. Eligible investors will be allowed to participate in railway design, construction, consultation and equipment purchase.

Investors will be encouraged to invest in all kinds of railways, including passenger lines and profitable coal-carrying heavy-haul railways. The guideline also says railway-related companies are encouraged to go public while more insurance funds are welcome to invest in rail.

Mr Wang Mengshu, an expert on railway technology and a member of the Chinese Academy of Engineering, applauds the move to break the funding monopoly, and expects to see more. "Private capital will be cautious in entering the railway sector unless there is a good profit distribution scheme between the government and the company," he says.

Wang believes the priority for railway investment in China is shifting away from high-speed. He says for the 2011 railway development programme, China approved nine new lines, mostly for freight, and it did not approve any new high-speed line projects.

"This indicates that in the next couple of years, China's railway development will focus on freight and conventional passenger lines," says Wang, who believes that while China will try to complete all the current high-speed lines, it will be very cautious when it comes to launching expensive new high-speed projects.

PART of the Beijing - Wuhan line tunnels beneath Shijiazhuang city, the capital of Hebei Province, which is a departure from the way lines have been built up to now. "Previously, we built viaducts when high-speed lines went through cities, whereas this time we dug a tunnel," says Mr Qiu Jianwei, director of the public relations department of the China Railway Tunnel Group, which is responsible for building the Beijing - Shijiazhuang section of the high-speed line to Wuhan. "It is the first time that a high-speed line has been constructed underground in China," he says. Up to now, his group has built urban metro lines.

Qiu says the 6km-long tunnel passes beneath the downtown area of Shijiazhuang city in order to reduce the land take in the city centre. According to Qiu, the 12m-diametre tunnel has a depth of between 8.5m and 22m. The space between the tunnel roof and the city above is designed for a two-floor shopping mall with lawns on the surface. The tunnel has been excavated to a width ranging from 28.2m to 52m to provide space for the Shijiazhuang - Qingdao high-speed line.