Numerous rail projects opened in China to coincide with the 100th anniversary of the founding of the Communist Party at the end of June. As Andrew Benton reports, this is by no means the end of Chinese rail expansion. 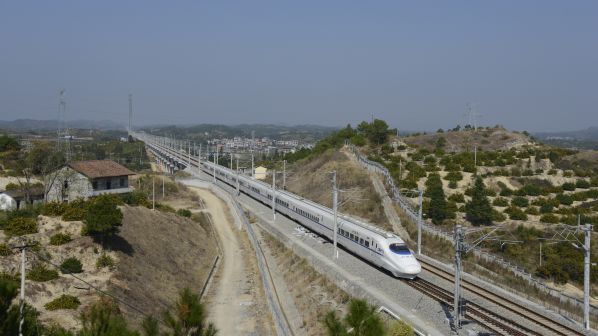 Among the notable targets of China’s National Transport Planning Outline 2021-2035 is another vast expansion of the high-speed network to 70,000km. Photo: Andrew Benton

A plethora of new metro line openings in China in the first half of 2021 meant that by July 1 a total of 49 cities on the mainland were operating metro networks with a combined route length of 8448.67km.

New transit lines opened in 14 cities in the first half of the year (Table 1), four of which - Luoyang, Jiaxing, Shaoxing and Nanping - opened their first lines. In total, 478.4km was added of which 361km was heavy rail metro, 46km light metro, 42km new tram lines, 14km electrically-guided rubber tyred route and 15.4km of rail-guided rubber-tyred route. By June 30, Shanghai’s system was the longest at 875.9km, followed by Beijing with 799.1km and Chengdu with 652km.

The new metro cities are generally second or third-tier cities, typically smaller and not as high profile for central government investment and support as provincial capitals and the centrally-managed municipalities of Beijing, Chongqing, Shanghai and Tianjin. However, the smaller cities are often huge conurbations of many millions of people, such as Luoyang which has a population of 6.5 million, including 2 million in the urban area.

New line openings in the Yangtse delta region coincided with the release in early July of a new rail plan for the region up to 2025 by the National Development and Reform Commission (NDRC). The plan covers high-speed, conventional, inter-city, and suburban rail as well as metro development in the provinces of Zhejiang, Jiangsu and Anhui, and the city of Shanghai.

By the end of 2025, the region expects to have a rail network of 22,000km, with all cities above prefecture level connected to the high-speed network. All cities with populations of 200,000 will have a rail connection, as well as 80% with 50,000 inhabitants or above. 8000km of the 17,000km of railway network will be high speed rail with a 3x3 horizontal/vertical network of trunk lines connecting with hubs in Shanghai, Nanjing, Hangzhou, Hefei and Ningbo. There will be around 1500km of inter-city lines, 1000km of suburban rail and 3000km of metro lines. The plan lists 24 new conventional and high-speed lines, nine inter-city lines and 30 suburban routes for completion, at a projected cost of Yuan 393bn ($US 60.6bn).

The plan also seamlessly links with the National Transport Planning Outline 2021-2035 released in March, and which sets targets of achieving a 70,000km high-speed and 130,000km conventional network by 2035. This includes a focus on developing inter-city networks in the Beijing - Tianjin - Hebei Jingjinji area, the Yangtse delta, Greater Bay and Chongqing-Chengdu areas and includes exploring the development of a trial maglev system connecting major cities.

The latter region is western China’s foremost growth area, with plans issued earlier this year by the Ministry of Science and Technology for it to develop into a leading hub for innovation, attractive to domestic and overseas investors alike.

In June, NDRC issued an integrated transport and connectivity plan for the Chongqing-Chengdu region to 2025, with an outlook to 2035. The plan includes the design of new passenger-dedicated lines (PDL) between Chongqing and Kunming, Chongqing and Wanzhou, and Xining and Chengdu, the construction of PDLs from Chongqing to Xi’an and Yichang and an improved PDL network in the Chongqing-Chengdu area, as well as new inter-regional conventional lines.

The National Transport Planning Outline 2021-2035 has five key goals for rail:
• boost innovation by reforming the rail supply sector to embrace the “Internet +” and the “Internet of Things +” to drive progress, as well as 5G, AI and other modern information technologies
• improve integration of rail with other modes, including developing more multi-modal hubs and creating seamless logistics connections
• improve the quality of rail services through a high-capacity and high-quality inter-regional passenger network based on high-speed rail, the introduction of high-speed freight services, improved urban-rural distribution and the creation of new rail freight products that meet demand
• develop a safe and environmentally friendly low-carbon railway by enhancing the safety and durability of infrastructure and improving the level of intelligence and standardisation of transport equipment, supported by a comprehensive and coordinated railway governance system, and
• provide better international services by improving connections with neighbouring countries, accelerating the construction of new land-sea corridors in the west of China, improving the quality and efficiency of China-Europe services, and further boosting international logistics and trade channels.

It is now 10 years since the launch of the China Railway Express (CRE) land-bridge between China and Europe. Up to the end of May 2021, 39,622 CRE trains had departed Chinese cities for 160 cities in 22 European countries, carrying 3.54 million containers.

Despite occasional stories of services on the return journey running with largely empty containers, reflecting China’s role as manufacturer for a notable proportion of Europe’s consumer goods, and financial support from municipal governments to encourage shipment by rail, CRE has been a huge success and is already part of the fabric of the Asia-Europe logistics network.

The service looks set to grow further. In the first half of 2021, 7377 trains departed China for Europe, an increase of 43% over the same Covid-affected period last year, carrying 707,000 containers, a 52% increase over 2020, and together leading to a 98% increase in traffic in a single year.

First half passenger journeys were up by 67.5% over the same period in 2020 to 1.365 billion, an enormous increase in which the depressive effects of Covid-19 on travel last year played a notable role. In the second quarter, daily ridership was 9.03 million, almost 3 million higher than the first quarter, and the daily maximum so far this year was 18 million journeys, a new record.

CR introduced a “One day, one route map” initiative this year that targets service provision more closely to projected use on a day-by-day basis. Additional services have been provided during the 40-day Spring Festival travel period for many decades. In more recent years extra summer services have been added in July and August for holiday traffic, but the new initiative takes a more nuanced approach, with extra trains running during the long-weekend holidays and the May Day vacation.

The Beijing - Shanghai high-speed line marked its 10th anniversary on June 20. This is thought to be the only Chinese high-speed line that makes an operating profit, which it has done consistently since 2014, and is extremely well-used, with 1.35 billion passenger trips in that time. Beijing - Shanghai High Speed Railway Company was listed on the Shanghai stock exchange at the end of 2019, and the company has gone from strength to strength since then, introducing market-based variable ticket pricing, improving the passenger experience with better smart systems on board, and increasing service frequency.

Despite the impact of Covid-19, business has grown and the line has remained viable. “With the support of the China National Railway, the company effectively adjusted its transport capacity, and bucked the downtrend by realising Yuan 25.24bn in sales revenue, which yielded a fairly good profit last year, achieving an overall better-than-expected performance,” Mr Wen Weiming, chief accountant, told China Daily, noting that in the first quarter of 2021 revenue rose by almost 12% to Yuan 5.74bn compared with 2020. This is in stark contrast with many other railways around the world which are only just starting to recover from the effects of the pandemic.

THE Lhasa - Nyingchi section of the Sichuan - Tibet Railway was among the lines to open on June 25 to coincide with the centenary of the founding of the Chinese communist party.

The 435.48km single-track electrified Lalin Railway in the southeastern Tibet valley between the Gangdise Mountains and the Himalayas on the Qinghai-Tibet Plateau runs from Lhasa, the capital of Tibet, to Nyingchi. The 160km/h line connects with the existing Lari and Qinghai-Tibet railways, and is part of the larger Sichuan-Tibet railway, which remains under construction.

The line is Tibet’s first electrified railway and is served by 31 new Fuxing Plateau electro-diesel trains. The 12-car trains were designed by China National Railway (CR) alongside local manufacturers and are specially adapted to the extreme conditions experienced in Tibet. They feature power cars at each end of the train and have capacity for 755 passengers split across first, second and business classes. A combination of diffusion and distributed oxygen is installed to supply passengers with a comfortable riding experience when travelling at high altitudes and in long tunnels.

Construction on the project got underway in 2015 and proved extremely challenging, with more than 90% of the line running more than 3000m above sea level. The line crosses the Yarlung Zangbo River 16 times and required the construction of 47 tunnels and 121 bridges, including the Milin tunnel, one of six 10km tunnels constructed on the most difficult part of line. Milin tunnel is about 1200m below the surface and has an average altitude of 3100m.

The southeast of the Qinghai-Tibet Plateau experiences some of the strongest tectonic movements in China. CR says it has introduced various prevention and control methods to minimise the risk of geological disasters, including comprehensive safety response mechanisms.

CR says the new line will offer a reliable form of transport in southeastern Tibet, an area that has been difficult to reach because of the challenging terrain, helping to boost tourism as well as improving access to freight services for local farmers and businesses.