Connecting the heart of southern Italy

The latest project in the development of Italy’s high-capacity high-speed network is the rebuilding of 121km of the 311km main line from Naples to Bari. Webuild was awarded contracts to build four of the seven new sections and its project manager, Vincenzo Moriello, explains to David Burroughs how the company is using its expertise in tunnel boring and viaduct construction to build the line through mountainous terrain. 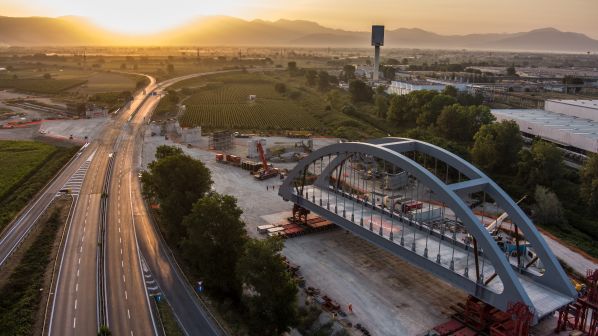 IN order to better connect the railway in Southern Italy with the rest of the Scandinavian-Mediterranean Trans-European Transport Network (TEN-T) corridor, construction is underway on a 121km high-speed, high-capacity line between Naples and Bari.

The line is being built on a new alignment between Napoli and Foggia, with the existing line set to be dismantled after the opening of the new railway. The main goal is to speed up the connection and improve accessibility to the network, both for national long-distance trains and for regional and freight services, Italian Railway Network’s (RFI) says. Once the work is completed, the journey between Naples and Bari will be reduced from four hours to two, and between Rome and Bari from five hours to three.

The line, which will use 60 UNI ballasted track, will have a maximum speed of 250km/h and a maximum gradient of 13:1000. Traffic will be controlled with RFI’s ACC-M multi-station interlocking system and spacing with trivialised automatic block as an extension to the ERTMS system.

RFI has split the project into seven sections, including four already under construction:

Work on the Telese - San Lorenzo and San Lorenzo - Vitulano contract, which was awarded to the Telese Scarl Consortium comprising Ghella, Itinera, Salcef and Coget, is due to begin in December.

Contracts for the Hirpinia - Orsara and Orsara - Bovino sections have also been awarded to a consortium of Webuild and Pizzarotti, with executive design now underway. The Apulian Bovino - Cervaro section was completed in 2017.

Work on all sections is due to begin by the end of 2021, with an operational connection between Naples and Bari scheduled to launch in 2023. The full project is due to be completed by the first half of 2027.

Having been awarded four of the seven sections totalling 73.4km, including the majority of tunnelling work for the line, Webuild is playing a major role in the development of the line. Webuild, formerly Salini Impregilo, acquired the remaining stake in Astaldi, the second largest infrastructure group in Italy, in March this year as part of its Project Italy initiative to consolidate the sector.

Its work on the Naples - Bari line is being overseen by project manager, Mr Vincenzo Moriello, who has more than 20 years’ experience building tunnels using tunnel boring machines (TBM) around the world, including in Doha and Riyadh. He is now bringing that expertise back to his home country, where he will oversee eight TBMs working concurrently when the project is fully underway by the end of next year.

The TBMs will bore a 1.8m-long section, before a ring is placed inside the tunnel. The concrete ring, which is 55cm thick for the 12.8m-high TBMs and 50cm thick for the 10m-high TBMs, is installed in eight sections, including seven segments of the same size and a smaller “key segment.” Moriello says the placement of this segment determines the tunnelling direction of the TBM, either straight ahead, to the left or right, or up and down. The ring must fit perfectly into the tunnel, which means each mould must be extremely precise. Overall, each TBM will install an average of 10 rings a day, boring 18m of tunnel.

Due to the soft geological conditions that the tunnels will be bored through, the TBM will use Earth Pressure Balance (EPB) shields. A rotating cutting wheel is pressed onto the tunnel face and excavates the material, which is then mixed into a paste and pressurised behind the cutting wheel to equalise the pressure of the surrounding soil and groundwater.

Webuild is purchasing the two 12.8m-high TBMs from China Railway Engineering Equipment Group (CREG) and is currently in discussions with manufacturers for the contract to supply the other six TBMs.

“We always follow this hierarchy: zero accidents, then after that good quality, and then production, that is our goal.”

“We have worked together with the Chinese company, and we shared my knowledge and experience to finalise the machine,” Moriello says. “For this tunnel we need to have a good machine and also good people.”

The construction of the first two TBMs has been completed, with the machines currently on a ship sailing from China due to arrive in Italy, in October. The remaining six TBMs are due to arrive within the next seven or eight months (from September). They will then require three to four months of assembly before they can begin tunnelling.

Safety is a major focus during the tunnelling process, and Moriello says this comes ahead of other considerations. “We always follow this hierarchy: zero accidents, then after that good quality, and then production, that is our goal,” he says. Following the Covid-19 pandemic, this also includes further measures to protect staff such as introducing masks or increasing the airflow in tunnels. These measures are also reinforced during regular toolbox safety meetings.

While Moriello is the expert on TBMs and tunnelling, which comprises 85% of the work contracted to Webuild, he is assisted by two experts in viaduct construction for the remaining 15%. The Apice - Hirpinia section includes two 500m-long viaducts that will be 35m and 38m-high. These will be built by installing the piles for the viaduct, before the deck is laid in sections. Moriello says the deck will be laid between two piles, before the next section is jacked up and moved out over to the next pile in a sequential movement.

Following the construction of the tunnels and viaducts, another team will then be responsible for the installation of the electrical and mechanical systems, including the track.

One of the major feats of engineering on the Naples - Cancello section involved the installation of three 2500-tonne steel arches over a road near Acerra, on the outskirts of Naples. The first 80m-long, 21m-high bridge was assembled on an embankment beside the road. Traffic was stopped for 24 hours while it was lifted about 5m above ground using strand jacks and moved into place during a 10-hour operation on March 29. 18 special trailers distributed the weight of the structure along 104 wheeled axes. The second and third bridges were installed by August 3.

The project is making use of building information modelling (BIM) software for the Apice - Hirpinia, Hirpinia - Orsara and Orsara - Bovino sections, as well as for the stations and buildings for the Naples - Cancello section.

Moriello says this is the first time he has used BIM for a full project, and he describes the software as very important for the future of construction.

“We have everything under control in a very short time, it’s very easy,” he says. “The system allows the quantities of materials such as steel, concrete and waterproofing to be kept track of, and variations to the project to be easily calculated and prepared.”

While the other three sections run through more remote mountainous regions, the Naples - Cancello section has presented unique challenges as it runs through a highly-urbanised area. This has required the careful relocation of utilities, which Moriello is not always easy in Italy. Naples’ long history has also required careful measures to protect archaeological sites along the route, with specialist staff carefully managing any archaeological finds, which include a village and tomb.

Moriello and his team are overseeing four smaller project teams that are each responsible for a section of the line. Monthly meetings are held to provide updates on the progress and various lessons learned during construction. Twice yearly meetings are also being organised by RFI between the contractors of all seven sections to provide progress updates to the wider public.

This collaboration and teamwork, coupled with the teams’ expertise, will be crucial in ensuring the project is a success when it is completed in six years’ time.