Cooperation is the name of the game in Swiss logistics

A combination of rail and road transport is being used in the logistics chain to good effect in Switzerland. Anitra Green reports on how operators are innovating and cooperating for their mutual benefit. 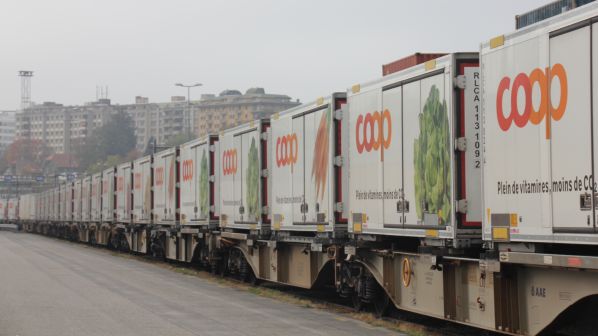 ACCORDING to the European Union (EU), a trip of less than 300km for a freight train is not viable. However, this is being challenged in Switzerland, due to the country’s topography, its ban on night-time driving for lorries, frequent road congestion and its location as a transit country, with the result that there have been positive developments in intermodal freight in the last few years.

Distribution networks are a case in point. The distribution network of Coop, a major Swiss supermarket chain, is run by its RailCare subsidiary, with 11 hubs in three regions. The City Cargo Geneva train shuttles between the Aclens hub and Geneva three times a day, a distance of only 67km, carrying 680,000 containers a year with supplies for 45 stores. According to Mr Pierre Page, head of customer care and products with Coop, this is more efficient and emits less CO2 than the alternative of using about 60 lorries a day on a very busy highway.

At Geneva Lancy-Pont Rouge, containers are transferred to lorries for final delivery to supermarkets from 05.00 to 16.00, with empties returned to the same terminal. Boxes are transferred horizontally using the Container-Mover 3020 system. Page says a new generation of refrigerated swapbodies has also been introduced, with the newly developed rCE Powerpack using kinetic energy taken direct from wagon wheels.

Other initiatives are underway in Geneva. Activities at the La Praille intermodal terminal include shunting and train formation, break-bulk, and handling import and domestic traffic, waste and building materials. Though La Praille is well-situated with good rail and road links, the current buildings are outmoded so SBB is planning a new terminal with 380m-long tracks with cranes, a logistics centre and a new road access. This is part of Swiss Federal Railways’ (SBB) Step ES 2030-35 Strategic Expansion Programme.

The 66km Geneva - Lausanne main line has the highest rail freight growth rate in the country. It is used by 670 passenger and freight trains a day and this is expected to rise to 800 in the foreseeable future. Work is underway on the Léman 2030 project to upgrade the line. The initiative includes 21 measures, which prioritise freight bottlenecks at Founex, Vufflens and Morges-Denges.

However, track upgrading and maintenance can have an adverse effect on rail freight. Mr Frank Furrer, secretary general of VAP Cargorail, representing around 300 organisations in the loading/ logistics industry, refers to the general problem of track maintenance, with most of the work conducted at night, which is when much of the freight moves. “That’s just one problem: rates for paths are too high, for example,” he adds.

As in other European countries, there has been a significant drop in wagonload traffic in Switzerland. VAP is trying to find a solution by forming a common interest group with the Swiss Public Transport Association (VÖV) and SBB Cargo. VAP wants all involved to work together, including other railway companies and customers. “We must also get rid of outmoded structures,” Furrer says. “We are holding workshops, and we are making progress.”

The Swiss Road Transport Association (Astag) has a similar attitude. “It is very important to have road and rail,” says vice director Mr Andre Kirchhofer. “There are a lot of bottlenecks on the road system, and the rail network is not much better especially at the terminals. But we are open to discussion with all sides with the emphasis on multimodal transport: cooperation is the right way.”

An example of a road haulage company already putting this into practice is Camion Transport, which uses lorries only for the first/last mile and carries consignments between terminals overnight by train. “Our success depends on the night-driving ban,” says Mr Mathias Lanz, logistics coordinator with Camion.

Mr Hans-Peter Hadorn, president of VÖV’s railfreight commission, sums up the situation: “Rail freight connects Switzerland, and it is more eco-friendly than road.” For the future, a revision of transport regulations is underway, he reports, with passenger and freight trains having equal priority. The idea is to have at least one path per hour for freight on all lines, and six paths per hour on the Gotthard route with three for passenger trains. The aim is “co-modality” on the basis of non-discriminatory access and a liberalised rail freight sector.

“It’s essential that all parties get together to develop a strategy,” Hadorn says. “A platform has now been created for this purpose with VÖV, Swiss Cargo Forum, Astag and Economiesuisse, but this cannot be instituted overnight.”