Is the Single European Rail Area achievable or an impossible dream?

The International Union of Railways (UIC) is coordinating a bi-weekly meeting of railways and rail operators from around the world to discuss combating the continuing spread of Covid-19 and ultimately the industry’s recovery from mass shutdowns. 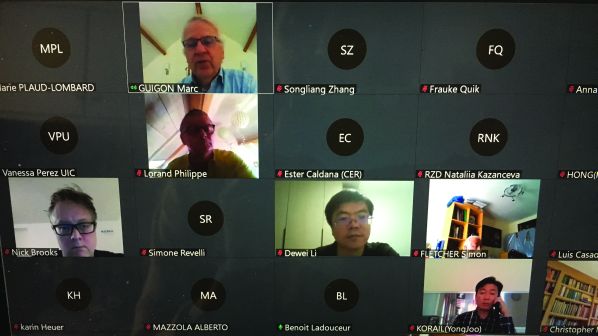 The UIC’s Covid-19 taskforce has brought the global railway community together via online video conference calls.

The International Union of Railways (UIC) promotes itself as both the global railway’s back office and a forum to share experiences and best practice. With the coronavirus pandemic prompting an international crisis unlike anything seen in living memory, the association’s role in bringing railways from around the world together has never been so relevant.

Mr Mark Guigon, the UIC’s passenger director, is leading the Covid-19 taskforce, which was launched in February. He says 22 people attended the first online meeting on March 5. This was followed by around 80 on March 17, with participants spread from North America, Europe, Iran and Turkey, China, Korea and Japan.

Further meetings were held on March 31 and April 14 and membership is now at 115 from more than 50 rail companies as well as 12 international organisations, including the International Association of Public Transport (UITP), Community of European Railways and Infrastructure Companies (CER), and the Association of American Railroads (AAR).

Guigon says representatives from Italy, where the virus was exploding at the time of the early meetings, found it useful to exchange experiences with colleagues from China, a trend that has continued. Similarly, Spanish operator Renfe has learnt about French National Railways’ (SNCF) use of high-speed rolling stock as “hospital trains”.

“Every network has its own way of thinking and it was very interesting to see how the others managed stations and relations with the public,” says Mr François Davenne, UIC director general. “When you are alone in your country it is always difficult to see all the aspects of the question. To have the experience of another continent or undertaking will help you better understand what you have to do.

“For example, we were happy to see that the experience was welcomed by the Japanese, who are isolated with a very specific system. The reason for that is because the railway is an open system and when dealing with a sanitary crisis in an open system, you need a lot of collaboration, and that is what we have tried to provide.”

“To have the experience of another continent or undertaking will help you better understand what you have to do.”

The UIC has published a document, Management of Covid-19: Guidance for Railway Stakeholders, which summarises the exchanges of the early meetings and establishes best practice for combating the spread of the virus. The association is set to release an update of the document “soon.”

Guigon says the UIC is also encouraging its members to fill in a questionnaire to collate responses to the pandemic and will continue to use this method to gather information.

With many of the world’s railways already operating limited services, attention is shifting to what is next and the industry’s recovery.

“The situation will evolve, but in different parts of the world this will not take place at the same speed or the same time,” Guigon says. “It really is a tricky question. China was the first to suffer and a lot of countries have followed. But we will also see this in some weeks in other continents like Africa, where there is a time-lag after Europe.”

In China, which is steadily recovering, Guigon says there are already noticeable differences in how railways are managing the use of stations and trains as well as passenger interactions at ticket offices. “It shows that the system, although it is an open system, is able to cope with those constraints with handling the pandemic,” Guigon says.

Davenne says that at the end of the crisis the UIC will produce a document outlining the practices implemented by members at stations, onboard trains and among operating staff to combat the spread of the virus. He says many of these practices are likely to remain in the sector long after the current pandemic subsides, with the world not quite being the same again.

Davenne adds that the crisis is offering people a time to reflect. With fewer cars on the street and less pollution, and people working remotely, he says there may be less emphasis on travel in the future, which could be both advantageous for the environment and railways as a mass transport mode, which is available when required.

“We as a sector will continue to request a level playing field,” Davenne says. “It is a sanitary crisis and it doesn’t change the fact that we need to have modal shift to less emitting modes. Politically speaking it is necessary to invest in mobilising more capacity.

“We need to recover fast and I hope what we are doing within the UIC with this taskforce will help to rapidly return services, and that we will come back to normal - normal being that we need more investment.”