Swedish private operator Snälltåget is counting the cost of the Covid-19 pandemic as it continues to run a reduced service. But as Marco Andersson, Snälltåget’s marketing manager, reveals to Kevin Smith, the operator is hopeful of riding out the storm. 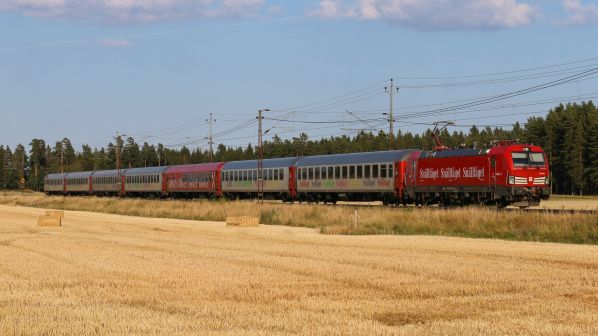 Snälltåget is planning to restore services to the Jämtland region in July to meet demand from domestic holidaymakers.

STENA Line’s announcement that it was suspending ferry services between Trelleborg and Sassnitz on April 8 due to coronavirus travel restrictions was a blow for Swedish private rail operator Snälltåget.

The operator uses the ferry for its seasonal overnight train service from Malmö to Berlin and had already suspended operation until June 15 following the Swedish state department’s recommendations against all international travel. The operator planned to offer a daily service from June 22 and was eagerly awaiting an announcement from the Swedish government at the end of May of what it might, or might not, be able to offer and from when.

Speaking to IRJ, Mr Marco Andersson, Snälltåget’s marketing manager, said the operator was carrying just 15% of its usual passengers at the end of April but was still operating around 30% of its usual traffic, a level which will not sustain the business.

“It is possible to survive with some reductions, but we need to return to about 75% of our operation to be profitable again.”

Owned by Transdev, Snälltåget operated its first train between Malmö and Stockholm way back in 2007. It has since grown to offer two trains per day between the cities as well as a winter service to Åre, and a thrice-weekly overnight service to Berlin, which launched in 2012. Indeed, Snälltåget is the only operator to offer overnight services between Sweden and continental Europe.

“It is possible to survive with some reductions, but we need to return to about 75% of our operation to be profitable again,” Andersson says. “We don’t know when that is going to be possible and that is the big question that everyone is seeking the answer to.”

Before the crisis hit, the future was looking positive for Snälltåget. The operator invested in 10 former Nightliner couchette coaches in 2019 to facilitate the Malmö - Berlin service increase. The coaches have six berths per compartment and capacity for 60 passengers.

The operator was also reporting a steady increase in ridership on its domestic trains as more Swedes sought alternatives to flying. Andersson reports that Snälltåget had sold out many of its trains and was looking forward to a busy summer season.

Covid-19 is a major shock, but Andersson says the operator is staying optimistic. Snälltåget is targeting the resumption of its Malmo - Stockholm - Jämtand mountain area night trains on two days a week from July 29 until September 27, potentially carrying passengers going on domestic holidays.

In addition, while legacy equipment used to operate the Malmo - Berlin service was limited to only the Trelleborg - Sassnitz crossing, the operator is exploring how it might use the new equipment on the ferry from Trelleborg to Rostock, or via the Öresund rail link to Denmark.

Whatever the operator is able to offer, capacity is very likely to be restricted by social distancing measures. Already a significant proportion of the seats on the trains which continue to run are blocked off, limiting the number of people able to ride.

“It will make everything more complicated,” Andersson says. “If we need to keep social distancing for a long time, then maybe the ridership will increase but we will still need to get paid for the empty seats in some way. It will be very hard to make a profit based on these conditions.”

“In April our staff have been working around 20%, but we still have 50% of these costs to cover.”

Snälltåget is eligible for the Swedish government’s general support package for businesses where the government is picking up 50% of the cost of wages if employees are working less than 40% of their usual hours. The operator could also apply for a new programme which is subsidising costs for businesses that have lost more than 30% of revenue.

But while the Swedish government has been quick to act to offer the aviation sector and the 22 airlines that use Swedish airports financial support to the tune of a €465m loan package, similar support for the country’s rail operators is not yet forthcoming.

“In April our staff have been working around 20%,” Andersson says. “But we still have 50% of these costs to cover, and to be honest, this only accounts for a small proportion of our overall costs. We have the financial costs of leasing the locomotives and we still have to negotiate with suppliers that want to shutdown some of their contracts with us. Reducing the cost is an ongoing process and it is not simple, but we try our best.”

Andersson says that in such a climate the operator has to be creative and potentially tweak its business model to remain viable. However, with current measures only set to cover 50-60% of losses, commercial operation would only be restored through major dispensations, such as subsidised infrastructure access charges, a temporary public service obligation contract like Westbahn has secured in Austria, or offering credit to help operators with fixed costs.

“If we are to take these big steps to favour sustainable travel, then it will require some help from the government or from the EU, that is clear,” Andersson says.

In a Facebook post to passengers on April 9, Snälltåget said it was certain the appetite for using its trains will return, and with a major company like Transdev behind it, it has the resources to focus on the long-term.

But like any business it can only sustain losses for so long. Until there is a vaccine for the virus, or higher levels of compensation, the future for Snälltåget looks a little less rosy than it did before the crisis.