While Brazil’s freight railways have continued to prosper despite the coronavirus pandemic, urban passenger operators have seen a reduction in the number of users and revenue which is negatively impacting construction projects. 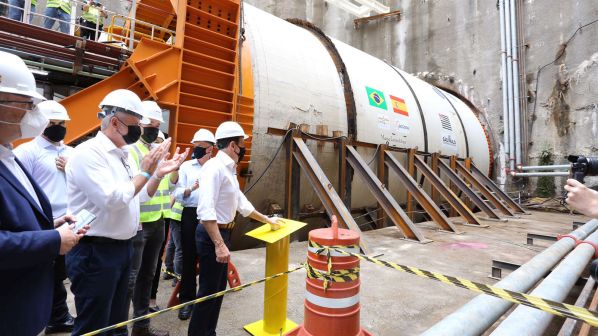 THE exception is the state of São Paulo, which, despite suffering a drop in ridership, is continuing to invest and seek support from the private sector to continue projects.

According to a report by the National Association of Passenger Rail Operators (ANPTrilhos), 46 million passengers travelled on the São Paulo Metro and Paulista Metropolitan Trains Company (CPTM) commuter rail network in April 2020, when lockdown was in its strictest phase. In October 2021, nearly 120 million passengers were transported on the two networks, the highest number recorded since the beginning of the pandemic.

Despite the recovery, traffic is still lower than pre-pandemic levels, according to ANPTrilhos. In August 2019, 208.4 million people were transported on the São Paulo rail network.

Nevertheless, construction work did not stop. “On the contrary, we resumed the work on Line 6/Orange, which had been stopped since 2016,” Mr Paulo Galli, secretary of the State of São Paulo’s Metropolitan Transport Secretariat, told IRJ. “We were very aggressive because public transport is an essential service for the state.”

Line 6/Orange is regarded as the largest infrastructure project currently underway in Latin America. Acciona was awarded a contract for the civil works and systems in October 2020, after the government clashed in court with the previous consortium. The 24-year deal covers both construction and operation.

The project involves investing around Reais 15bn ($US 2.6bn) and includes the supply of 22 trains from Alstom. A tunnel boring machine started work in December and 4000 people are already working on the project. Construction is expected to generate 9000 jobs in 2022.

Line 6/Orange, which is expected to open in 2025, will be 15.3km long and have 15 stations, connecting Brasilândia in the north with São Joaquim east of the city centre, reducing the journey time from 1h 30min by bus at present to 23 minutes. It will be designed to carry more than 600,000 people a day and the first tunnel boring machine for the project was launched on December 16.

Another important project underway is the Reais 8.5bn extension of Line 2/Green. “This is our second biggest project at the moment,” Galli says. The scheme will extend the line from Vila Prudente to the Penha district, adding 8.4km and eight stations.

With a target completion date of 2026, construction is already underway with shafts being drilled to allow underground excavation. “This line will improve the mobility of the population in the east zone and in the cities served by Line 11, alleviating pressure on Line 3/Red,” Galli explains.

Under a second stage, Line 2/Green will be extended to Guarulhos. When this is completed, the line will be 23km long, making it the longest on the network.

In November, São Paulo Metro announced that it would award a contract to the Logit-QueirozMaluf-Almeida & Fleury-EGT Consortium, which won the tender to study the economic-financial and legal model for the implementation of Line 20/Pink.

The line will connect the western part of the city to the ABC area comprising Santo André, São Bernardo do Campo, and São Caetano do Sul, which includes automotive manufacturing centres. Line 20/Pink will be 31km long with 25 stations and two maintenance depots. The line will run from Santa Marina via Lapa, Pinheiros, Faria Lima, Rebouças, Moema, Cursino and São Bernardo do Campo to Santo André. Currently, geotechnical investigation and surveys are underway.

Line 19/Celeste is the most advanced of the planned metro projects and is at the design stage. São Paulo Metro has already contracted several survey and study services. With these studies in hand, São Paulo Metro will be able to start preparing to issue the public notice for the construction of the 17.6km line which will have 15 stations and be operated by a fleet of 31 trains. The new line will be implemented by the private sector using a new concession model.

In contrast with the progress on these metro projects, construction of the priority section of Line 17/Gold monorail, linking Congonhas Airport to Morumbi, has already been delayed for a long time and is expected to be further delayed. Work was contracted in 2011 to be completed in time for the 2014 football World Cup, but the contract was terminated in January 2016, and São Paulo Metro is now having problems with the new contractors the TIDP consortium of TIISA and DP Barros, which were appointed in April 2016.

After being fined, the new contract was terminated by São Paulo Metro due to the slowness of the works. Work on the 7.7km eight-station priority section of Line 17/Gold has now resumed. The elevated line will require 573 beams, most of which have already been installed.

On the other hand, BYD SkyRail has until January 2024 to complete the systems contract and complete delivery of 14 monorail trains by June 2024. Galli hopes test running will start this year.

São Paulo’s other monorail, Line 15/Silver, opened in 2016 with two stations, and another eight stations were inaugurated between 2018 and 2019 to complete the central section of the line. A contract is expected to be awarded this year for an extension from Vila Prudente to Ipiranga, with completion planned in 2024. Last year, the governor of São Paulo, Mr João Dória, requested an expropriation for the Colonial Garden - Jacu-Pêssego section.

Last August, CPTM awarded a Reais 158m contract covering the preparation of an executive project, and supply and implementation of the systems for an extension of Line 13/Jade from Engenheiro Goulart to Barra Funda. This was followed in September by a Reais 60m contract for the construction of a new passenger tunnel under Luz station.
In June, CPTM started to award contracts to the private sector to operate its lines. CCR won a 30-year contract to operate lines 8/Diamond and 9/Emerald. Under the deal, CCR will invest around Reais 3.2bn, mainly in trains and station refurbishment. CCR will take over at the end of this month.

“Despite the obligation to buy 34 trains, the company chose to buy 36 trains from Alstom,” Galli says.
At the end of May, CCR also presented to the state government a Procedure for Expression of Interest (PMI) to study the concession for lines 11/Coral, 12/Sapphire and 13/Jade.

“Now, we are in the final phase for contracting the executive project for the third stretch.”

The first stage of the proposed Inter-city Train (TIC) project connecting São Paulo to Campinas is starting to come off the drawing board. The project comprises three elements:

An auction for a 30-year concession should take place in early 2022. The concession will cover planning the services, acquisition of 23 trains and upgrading 150km of existing railway which is expected to require an investment of around Reais 7.5bn.

TIC trains will have Wi-Fi and air-conditioning and are expected to take little more than one hour to complete the journey.

In mid-2020, Doria, signed a Reais 217.7m contract with Queiroz Galvão to start work on an 8km extension to the Baixada Santista light rail line. Construction is underway on the extension, which will connect Avenida Conselheiro Nébias to the Valongo district in Santos with 14 accessible stations. The new section is expected to open at the end of 2022.

“Now, we are in the final phase for contracting the executive project for the third stretch,” Galli says, adding that he expects the contract to be awarded this year. This extension will be 7.5km long with four stations serving the São Vicente area.

When the final section has been completed, the Baixada LRT will be 27km long with 33 LRVs transporting 95,000 passengers per day.