Keith Creel, president and CEO of Canadian Pacific, and Patrick Ottensmeyer, president and CEO of Kansas City Southern, revealed how the deal to combine the two Class 1s came together and their plans for the first Canada-United States-Mexico integrated railway in a recent interview with Railway Age’s William C Vantuono. Kevin Smith picks up the story. 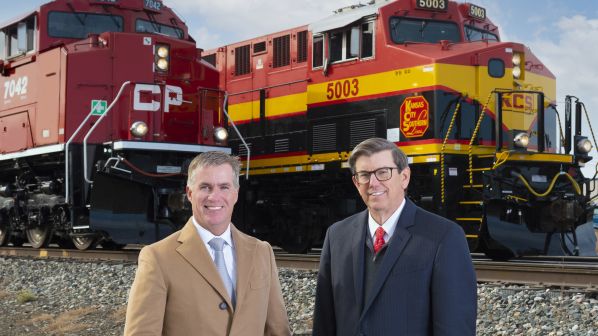 THE announcement by Canadian Pacific (CP), the sixth largest of the seven North American Class 1 freight railways, that it had entered into an agreement to merge with Kansas City Southern (KCS), the seventh, on March 17, prompted one of the biggest North American railway industry news sagas of recent years.

No sooner had CP and KCS agreed the terms of their tie up, CP’s long-term rival, Canadian National (CN) entered the fray. CN appeared to have outgunned CP with its bid, which offered a 21% premium on the CP offer and promised to create the “premier 21st century American railroad.” It was duly accepted. While seemingly cast aside, CP remained in the wings waiting to pounce. They did at the end of August when the United States Surface Transportation Board (STB) announced its unanimous decision to reject the use of a voting trust agreement for the CN-KCS deal. CP and KCS re-entered negotiations and on September 17 announced it had reached an agreement whereby CP would purchase KCS for $US 31bn including the assumption of $US 3.8bn of KCS debt.

The agreement cleared a key hurdle on December 14 when KCS shares entered a voting trust and CP effectively completed the takeover. The deal now only requires approval by the STB, which is expected by the end of 2022. The full integration of the two railways will take a further three years. And while at 37,800km it will still be the sixth largest Class 1, the network will stretch from Mexico City and Monterrey, to Texas, Kansas City, and then fan out between Chicago, Minneapolis, and Detroit to CP’s transcontinental network in Canada from Vancouver in the west to the Port of Saint John in New Brunswick in the east.

While rumours that KCS might be primed for a sale go back years, even decades, CP’s announcement did catch many by surprise. CP’s president and CEO, Mr Keith Creel, and KCS’ president and CEO, Mr Patrick Ottensmeyer, who both were named Railway Age’s 2022 Railroader of the Year this month, revealed in an interview with the publication’s editor, Mr William C Vantuono, in New York City on November 18, that they first discussed the possible tie up during a lunch meeting in Kansas City in mid-2020.

Creel, who became CP CEO on January 31 2017, says that talks were held prior to his time in the top job but at that time CP “didn’t have the balance sheet, didn’t have the financial strength or ability to have a seat at the table.” He credits the railway’s embrace of Precision Scheduled Railroading principles for its dramatic turnaround in performance in recent years.

“This railroad will create the backbone that connects all those supply chain partners, connects our customers to new markets and create investment in the US rail network.”

“At that lunch I presented an idea, a concept, about the possibility of bringing these two great, iconic companies together to create an even greater company,” Creel says. “We had a very exhaustive conversation about what hypothetically that might look like, what the competitive responses might be, what the regulatory landscape looked like. Just an exploratory discussion that was the first of what became many discussions that finally came to a successful consummation of our merger agreement together the second time.”

While other bids were a possibility, including from a group of private equity investors, both men admit that they did not necessarily anticipate CN’s offer. However, Ottensmeyer says CP was “far more aggressive in their pursuit, more engaged, more focused on the outcome of putting the two companies together.”

The relatively short regulatory approvals process reflects what Creel says is the lack of complexities in the deal; the two railways do not overlap at all meaning no customers are losing options as has been in the case with past mergers. He adds that the time frame suggested is actually far shorter than in the UP-SP and BN-SF combinations. “If they can achieve theirs with their complexities, then we can certainly achieve ours,” he says.

Ottensmeyer describes the merger as “very natural.” CP and KCS already share a 50-50 joint agency and a yard in Kansas City and he says KCS never really competes with CP for business, with the CP network heading north and KCS south. “We do a lot of things together and we have got a great relationship,” he says, adding that the possibility for a single line service will be particularly attractive to the vast freight and consumer markets covered by the expanded railway. He says this will drive intermodal truck and automotive conversion from road to rail up and down the network.

“Single line service really comes down to making sure you have total alignment and coordination of operating practices and philosophies, which we actually do today with the implementation of PSR coming obviously years behind what Keith and CP have done, but very similar in terms of operating philosophy,” Ottensmeyer says.

“This railroad will create the backbone that connects all those supply chain partners, connects our customers to new markets and create investment in the US rail network that will harden the infrastructure and create capacity for today’s business as well as tomorrow’s growth in a unique way.”

The combination also comes as potentially ground-breaking changes in the North American freight market and economy are taking place. The supply chain issues that emerged as a result of the pandemic and associated inflationary pressures is heightening work by strategists to de-risk the supply chain by moving more manufacturing and production back to North American shores. Growing tensions between the United States and China is adding fuel to this shift, which is potentially a great opportunity for rail.

Ottensmeyer says CPKC is primed to benefit. He says the railway can even help drive some of these decisions with the best example the automotive supply chain. “You look at where the auto plants and the suppliers and producers are, and you overlay that on our network, it’s a great match,” he says. “I think we can actually drive some of those investment decisions because of the fact that we are going to be so critical in connecting those markets.”

Mexico in particular is on the verge of a major transformation. A study by the Mexican government found that relocating 10% of what is manufactured in China and east Asia today to North America could translate into a 2% uplift in Mexico’s GDP. With the new USMCA trade agreement between the United States, Canada and Mexico taking hold there is future free trade certainty, which is encouraging the Mexican government to push its US and Canadian counterparts to make this happen.

The country is also seeking to play a greater role in logistics. The problems with congestion at the ports of Long Beach and Los Angeles, which handle 40% of containerised imports into the US, is fuelling the desire to increase capacity across the southern border, specifically at Lázaro Cárdenas, the country’s largest with a current capacity for 7-8 million TEU per year but with a major footprint for future expansion. Ottensmeyer says the port authority has invested heavily in building railway infrastructure, providing a major opportunity for CPKC to support the port’s growth.

“It’s a unique piece of property and I think there is a tremendous amount of potential,” he says. “Our route to get from Lázaro to Houston is actually [482km] shorter than the shortest route from LA Long Beach to Houston. Long-term it has got a lot of potential.”

“The US rail network becomes stronger not weaker as a result of this combination,” there’s not any redundant lines, it’s all about enhancing what we have and increasing the capacity we have.”

KCS is also investing to improve cross-border capacity. Ottensmeyer says it has approval to construct a second span of the cross-border international bridge, which will alleviate the current bottleneck. Construction is planned to start in 2023. Work is also underway to improve the process of working with customs officials on both sides of the border with Ottensmeyer stating the objective is to replicate the processes that exist between the US and Canada. However, he admits security concerns mean this is challenging.

Creel anticipates a $US 300m investment to upgrade the CPKC corridor from Minneapolis-St Paul to La Crosse, Wisconsin, and on the route that parallels the west bank of the Mississippi River to Kansas City, and then down to Laredo, Mexico. Centralised traffic control (CTC) will be installed while 30 separate investments will take place in passing loops, extensions and new builds in the first three years to prepare for the start of integrated operation.
“It’s a substantial amount of investment in an under-utilised asset,” Creel says. “As a standalone, you could never justify doing that. But together it unlocks the opportunity to create this real backbone that we’re talking about, which will uniquely benefit so many stakeholders.”

Certainly, the potential to tap into what Ottensmeyer describes as the “truck-dominated market” stretching from Texas throughout the American Midwest to Canada is great. Taking diesel trucks off the road will inevitably have a substantial environment benefit and Creel says he believes rail is very much part of the solution to the environmental crisis. He is hoping that such a shift will help to mitigate some of the environmental challenges his railway has been exposed to in recent times.

Unlike other mergers, both leaders say this combination is not about consolidation, or closing lines, it is all about growth. This is an exciting prospect for the North American railway network and one that is likely to continue to dominate the news cycle in the weeks and months ahead.

“The US rail network becomes stronger not weaker as a result of this combination,” Creel says. “There’s not any redundant lines, it’s all about enhancing what we have and increasing the capacity we have.”