The discovery of cracking in lifting points on class 80X trains and the subsequent withdrawal of the entire Hitachi-built fleet last month is continuing to cause problems for Britain’s Great Western Railway (GWR), one of four operators impacted. Kevin Smith reveals what went wrong. 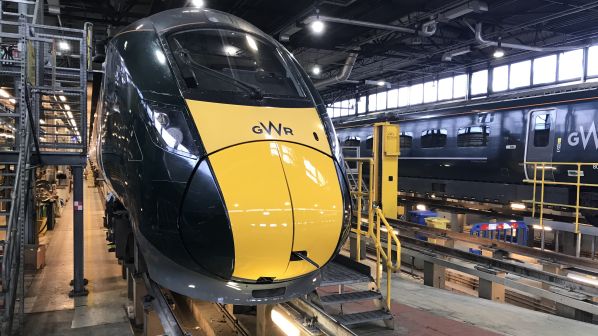 WHAT was supposed to be a quiet Saturday morning inspection of GWR’s class 80X fleet at Stoke Gifford depot near Bristol on May 8 turned out to be anything but.

The off-chance discovery of cracking on the front face of a lifting point on one class 800 bi-mode multiple unit led to the issue being found on a number of other trains. This prompted the immediate withdrawal of the fleet of 182 trains used by four operators - Great Western Railway (GWR), London North Eastern Railway (LNER), TransPennine Express (TPE) and Hull Trains - causing mayhem across much of the mainline network.

The cracking was found during a routine inspection for another ongoing problem with yaw damper cracking on the Hitachi-built trains, which was first discovered on April 11. While that issue did not warrant the fleet’s withdrawal, Hitachi engineers felt that as a matter of safety the lifting point issue did.

Any trains already in operation were promptly returned to depots as Hitachi quickly mobilised engineers to conduct extensive inspections of the entire fleet. Those inspections would continue over the coming days as Hitachi, with the support of British regulator the Office of Rail and Road (ORR), sought to establish that the trains were safe to return to service.

While the Hull Trains sets were quickly reintroduced later that day, followed by TPE’s on May 10, enabling both operators to restore their usual timetables, a significant portion of the GWR and LNER trains remained out of action well into the following week. Widespread cancellations ensued, prompting all operators and Hitachi to offer extensive apologies and compensation to affected passengers.

LNER reported operating 85% of its usual timetable on May 19 with one of two recalled Intercity 225 trains still in service. The limitations were down to engineering work at King’s Cross rather than problems with the fleet. However, GWR has faced more pressing issues.

While supported initially by CrossCountry, which ran extra trains to Swindon and the southwest, GWR said it was reassigning some of its own trains and deploying sets on loan from other operators.

Hitachi and GWR hosted an event for the media to present exactly what went wrong and what they are doing to put things right at Hitachi’s depot at North Pole in west London on May 20.

At this point 60 of GWR’s 93 trains had returned to service. However, GWR requires 74 trains to operate the May timetable. The operator reported on work by a steering group established within a few hours of the problem emerging to assess, prioritise, and assign various options to narrow the fleet gap and work as close to the timetable as it could.

While supported initially by CrossCountry, which ran extra trains to Swindon and the southwest, GWR said it was reassigning some of its own trains and deploying sets on loan from other operators.

Among these are three dual-voltage 750V and 25kV class 387s from c2c, which from May 24, were running three IET diagrams. The operator is also looking to borrow further class 387s from Govia Thameslink Railway (GTR) and reported working through some technical issues with these trains ahead of their entry into service. It is also considering using class 166 Turbo DMUs. However, it ruled out using Heathrow Express class 387s, locomotive-hauled trains, and reassigning HSTs used elsewhere on the GWR network.

The operator says that with the additional 387s, the core components of the timetable are there, and it is nearly at a point where few customers will see that a train is missing. But with some trains operating with five rather than nine or 10-car formations, and with demand set to continue to increase as Covid restrictions ease further, the priority for GWR is returning its class 800s and 802s to service. How long that will take remains to be seen with neither Hitachi nor GWR willing to be drawn on a specific target date.

Hitachi also did not confirm the exact number of trains that have been affected by the lifting point or yaw damper issue but said it was around half of the entire class 80X fleet. It added that the problem is not consistent with a certain vehicle type, whether it is five-car or nine-car, or the age of the train.

While initial identification of the crack at Stoke Gifford was at the front of the lifting loop, subsequent inspections found that the issue was more common at the back of the lifting bracket, an area difficult to access.

Following the withdrawal, on the morning of May 8, Hitachi, with support from engineers from Kasado, Japan, set out to understand the problem and determine whether the trains were safe to operate.

The fleet’s withdrawal was centred on concerns that material from the lifting point could become detached. Using a process of finite element analysis, the engineers quickly discovered that the lifting point is only under stress when it was used to lift the train, it was not providing any structural integrity for the vehicle, and it was safe to operate the train with these cracks present.

The lifting point is connected to a bolster through a series of four welds. The investigation found that even in the very unlikely scenario that all three sides of the lifting point are cracked and the welds failed, the lifting loop is sufficient to hold it to the vehicle body without the risk of becoming detached. Indeed, removing the lifting bracket from one class 802 to be sent away for analysis required heavy machinery, broke several blades, and took around 37 hours to complete.

This initial investigation, which found that the trains were safe to operate, was verified by Ricardo Rail and TWI. All trains that met the requirements are deemed safe to return to service with the vast majority now back in operation.

The investigation also led Hitachi to conclude stress corrosion cracking as the cause and that three specific factors must be in place for this to occur: material susceptibility; stress; and environmental factors.

Hitachi with support from Kasado is still investigating the root cause of the issue with TWI again providing verification assistance. This work will both inform how it can safely lift vehicles and how exactly it will fix the problem, and its strategy for doing so. The manufacturer says options such as setting up a separate facility to do the work are under consideration, but no firm decisions have yet been made.

The extent that individual trains are lifted has been investigated but ruled out as a potential cause as no correlation was found. As was operation of the trains in coastal areas and their exposure to salt water. The specific aluminium metallurgy used for the class 80X trains were based on those used on the class 395 EMUs Hitachi built for Southeastern, which have been in service since 2009, operating in a similar coastal environment to the 802s with no similar issues reported. However, the designs of both the lifting bracket and yaw damper were changed for the class 80X, which feature longer vehicles. Reviews are also expected of the protection offered by the paint on the trains.

Visual inspections of all trains in service are now taking place every 24 hours. The two-person check takes an hour for a five-car train and 1h 30min for a nine-car set, with the second engineer checking the first’s work. Inevitably this is a labour-intensive process, and Hitachi says it is exploring increases in capacity in order to continue the inspections as well as mobilise staff back to conventional maintenance and inspection tasks.

The 24-hour testing regime has presented a challenge to GWR in balancing the available fleet across its depots, but it says it is working closely with Hitachi to optimise management of this process.

In parallel, Hitachi is investigating the cause of the cracks to yaw dampers on class 800 trains, a device which restrains bogie rotation around the centre pivot as well as prevents hunting at high speeds.

The faults have been found specifically on the yaw damper bracket mount, which connects the yaw damper and the anti-roll bar to the bogie and the vehicle itself. However, the location of the fault varies by train. Three specific sites have been identified: a front face, side face and rear face, with the majority of the cracks found at the rear. The rear area is quite difficult to reach, with staff using mirrors and torches to observe the area.

While the occasional crack is more extreme, Hitachi is generally finding hairline cracks. Again, visual inspections of this area are taking place every 24 hours and any anomalies are subjected to non-destructive testing to check if it is a crack or paint defect. If a crack is present, that train is stopped from entering service until it is deemed safe to return.

While not playing down the issue, Hitachi did point out that there are 20 welds holding that section in position while the bolster is held in place at various other locations. TWI and Ricardo Rail are again providing support to identify the cause of the issue, but its complexity means it is taking some time to reach a conclusion.

While not playing down the issue, Hitachi did point out that there are 20 welds holding that section in position while the bolster is held in place at various other locations.

As part of this work, Hitachi was set to engage in stress gauge tests on one vehicle in service in cooperation with an operator during the week of May 24. It is hoped these tests will offer more real-life data on the stresses the train is experiencing.

For all four operators seeking to win back passengers as lockdown restrictions eased, the timing of the crisis could not have been any worse. It is also a major embarrassment for Hitachi. However, all sides have praised the speed of the response that put safety first, and the good sense of collaboration that has been present throughout the process. They can only hope there are no more hidden surprises as the issues are resolved.