Crossrail: behind schedule, over budget and under pressure

Londoners should have been travelling on the central section of the British capital’s new Elizabeth Line by now, but the £14.8bn Crossrail project is unlikely to open until 2021 and will cost even more than revised estimates. David Briginshaw reports on the project’s difficulties. 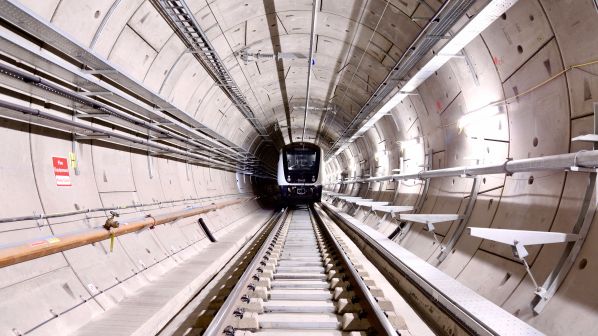 UNTIL last summer, the Crossrail project team was confidently predicting that the 21km central section of the 118km Elizabeth Line between Abbey Wood and Paddington would open on budget and on time in December 2018. The final section of 42km of bored tunnels under central London was completed on June 4 2015 allowing fitting out to commence and the £14.8bn Crossrail project was declared 65% complete. Tracklaying was completed in September 2017, and the 25kV ac electrification in the tunnels was energised in February 2018 enabling test running to commence. At the time, Transport for London (TfL) said the Crossrail programme was 90%-complete and on schedule to open in December.

Meanwhile, in July 2014, TfL awarded MTR Corporation a £1.4bn eight-year concession to operate Crossrail with an option for a two-year extension. The first of the fleet of Bombardier class 345 Aventra EMUs carried their first passengers on June 22 2017, when the trains entered commercial service with TfL Rail between London Liverpool Street and Shenfield.

TfL announced on July 13 2017 an order for four additional nine-car class 345 Aventra EMUs from Bombardier to support higher frequency services on the Elizabeth Line, expanding the fleet to 70 trains.

In May 2018, MTR started to operate a shuttle service using Crossrail trains between Paddington and Hayes & Harlington. The trains are also being tested for ERTMS operation on the Heathrow branch, but they are not yet allowed to carry passengers between Paddington and Heathrow Terminal 4, and this service is still being operated by class 360 EMUs.

The first signs of trouble regarding a potential cost overrun emerged in July 2018 when the Department for Transport (DfT) and TfL allocated an extra £300m to Crossrail. Infrastructure manager Network Rail also received £290m in the summer to complete the surface works.

In December a revised financing package for Crossrail was announced by the Mayor of London, Mr Sadiq Khan, the Greater London Authority (GLA), and TfL. The GLA would borrow up to £1.3bn from the DfT and repay the loan from its Business Rate Supplement and Mayoral Community Infrastructure Levy. The GLA would also provide a £100m cash contribution, taking its total contribution to £1.4bn, which it would provide as a grant to TfL for Crossrail. But with the final cost yet to be confirmed, a contingency of up to £750m was set aside by the DfT in the form of a loan to meet the remaining cost of the project.

On December 5, Sir Terry Morgan stepped down as chairman of both Crossrail and High Speed 2 (HS2) a few days after he told the BBC that he expected to be fired because of the delays to Crossrail. Morgan had been chairman of Crossrail since June 2009, the year in which construction started.

On April 3 the British parliament’s Public Accounts Committee (PAC) published a damning report on Crossrail. “We are not satisfied by the DfT’s vague response to our questioning on how it protected taxpayers’ money when overseeing delivery of the programme,” the PAC report says. “We are not convinced that new services will start to run in 2020 as now hoped, nor that the additional £2.8bn of funding provided will be enough.”

“It is clear that the delivery deadline of December 2018 had been unrealistic for some time,” says the PAC chair, Mrs Meg Hillier. “But the DfT, TfL and Crossrail Ltd continued to put a positive face on the programme long after mounting evidence should have prompted changes. Wishful thinking is no basis for spending public money and there remain serious risks to delivering this programme, with a revised schedule and costings for completing the work still to be agreed.”

“It is unacceptable that parliament and the public still do not know the root causes of the failures that beset this project. Nor will we accept the DfT and Crossrail Ltd’s description of these serious problems as systems failures.”

The PAC lists six key findings and actions it wants the DfT to take regarding Crossrail:
Finding 1: the DfT, TfL and Crossrail’s fixation on a delivery deadline of December 2018 led to warning signs that the programme was in trouble being missed or ignored.
Action: explain within six months the steps the DfT is taking to encourage a culture of openness and transparency and how it will ensure that project teams reconsider completion dates for major programmes at key points through the programme.
Finding 2: it is unacceptable that the DfT and Crossrail are unable to identify the root causes of the programme unravelling so quickly and so disastrously.
Action: consider the root causes of cost increases and delays and set out by June 2019 lessons learned and their impact on the DfT’s approach to the project.
Finding 3: the unacceptably laissez-faire attitude by the DfT and Crossrail to costs potentially rising by nearly £3bn.
Action: the DfT should set out how it considered the value for money for taxpayers when it agreed to increased funding in 2018.
Finding 4: the programme is at risk from further cost increases and delays.
Action: after reaching agreement with Crossrail, the DfT must outline how it has assured itself that the revised schedule and cost to completion are robust; the DfT should also detail how the £2.8bn of extra funding will be allocated.
Finding 5: weak governance by the DfT and Crossrail characterised by a catalogue of failures to adequately oversee performance.
Action: the DfT must explain by July 2019 how it has changed its contractual relationship with Crossrail so that it can properly exercise oversight and hold Crossrail to account for its performance managing the programme to completion.
Finding 6: the DfT and Crossrail have been unwilling to accept their responsibilities for the significant delays and cost overruns.
Action: the DfT should clearly articulate by the end of April 2019 what it, TfL and Crossrail are responsible and accountable for and what the consequences have been for those senior officials in positions of accountability and responsibility for failures on the programme.

It should have been apparent to Crossrail management well before August 2018 that the project was running late and that more money was needed for completion. Either managers were woefully out of touch with reality or were hoping against hope that everything would come good by the December 2018 deadline. In the meantime, limited train testing is continuing on the central section, but most of the fleet is in store and likely to remain so until 2021.