As the developer of the Crossrail project to build a high-capacity tunnel through central London attempts to bring it under control, Kevin Smith reviews the current status of the project and the lessons for future schemes. 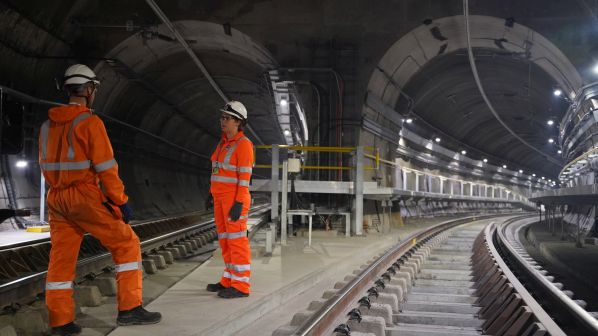 A seven-week blockade of the tunnels, which concluded on September 18, was deemed a success.

LONDON’s Crossrail should have been approaching the second anniversary of the start of operation in December. However, work on the key 21km central section of the Elizabeth Line remains underway and the railway is not now scheduled to open until mid-2022.

Crossrail Ltd announced that it would no longer meet the revised opening date of mid-2021 in July, confirming on August 21 that it would be pushed back until mid-2022. The company says that the project could cost another £450m to complete, £1.1bn above the revised financing package agreed for the project in December 2018, taking the total spend to more than £18bn. This compares with a £15.9bn estimated cost in 2007, which was cut to £14.8bn in 2010 as part of the government’s spending review.

Offering an update on progress with the project during a webinar hosted by the All Party Parliamentary Rail Group on September 15, Mr Nick Raynsford, Crossrail Ltd’s deputy chairman, reported that lower than planned productivity in the shafts and portals, which house all signalling and communications cables, have contributed to the delay. “The technical challenges of completing the works there are considerable,” Raynsford said.

In addition, the developer is now working from a revised schedule for handover of stations, which will take place throughout next year apart from Bond Street.

“London Underground would normally do two new station handovers in a year, we are trying to do eight in a similar period of time,” Raynsford said. “It was going to be technically very, very difficult if not impossible to do that without rescheduling and resequencing the station works.”

The Covid-19 pandemic has also impacted the project by constraining productivity. Less than 50% of the pre-Covid complement are currently on site limiting the capacity to scale up the level of work taking place.

“London Underground would normally do two new station handovers in a year, we are trying to do eight in a similar period of time.”

However, a seven-week blockade of sites, which concluded on September 18, was reported as a success by Raynsford. The blockade was necessary to advance work without having to deal with test trains in the tunnel and achieved a very high level of productivity.

Five of the six sites are now complete with Stepney Green set to follow in the next few weeks. Raynsford also confirmed that all central section stations apart from Bond Street are ready to support trial running. The situation at Bond Street was complicated due to the late start of work following the late delivery of the tunnels, the overly complex work site, and the poor performance of the contractor. Raynsford said it is no longer feasible for Bond Street to open with the rest of the central London stations, although the project has been redesigned to allow operation to proceed in such an eventuality.

Following the conclusion of the blockade, dynamic testing of signalling and train systems resumed with the goal of completing this stage by the end of the year. Systems integration will then commence ahead of the start of trial running at the earliest opportunity in 2021. Handover of assets to Rail for London, a subsidiary of Transport for London (TfL) and the infrastructure manager for the new line, will take place concurrently.

“We believe it should be able to get to trial running in early 2021 and start passenger operation in the middle of 2022,” Raynsford says. “Inevitably we have to caveat that by saying that given the uncertainties of Covid and further waves of the virus that may be affected. But that is a realistic assessment at the moment of when it can be achieved. Indeed, if it does go very well it might even be possible to do better than that.”

Also speaking during the webinar, Crossrail Ltd’s chair, Mr Tony Meggs, explained that Crossrail Ltd as a body is set to gradually dissolve and become a direct subsidiary of TfL over the next year. Meggs said the current leadership team will remain but have a much closer working relationship with TfL. An official announcement on this process is due to be made “soon”.

He also offered several lessons for future infrastructure projects to avoid some of the problems that have dogged Crossrail.

Meggs was appointed to lead a new management team in January 2019. He said that the original December 2018 deadline caused “mayhem” and warned similar large infrastructure projects to be aware of how deadlines are set. “As things slipped and slided a bit, as is almost inevitable, the immovable end date meant that there was a huge amount of compression which got built into the schedule,” Meggs said.

“Every year the schedule was revised but the end date was never moved, and as a consequence, two or three years’ worth of work ultimately got squished into a few months and of course that ultimately led to a failure to deliver on the date and, frankly, caused a huge loss of confidence in our ability to execute these large programmes.”

A further consequence of the fixed deadline was the premature demobilisation of 35% of the organisation. As a result, Meggs said the management team spent much of last year rebuilding the project’s capability and capacity to deliver.

He added that there is often a misconception of major programmes such as Crossrail. Instead of being viewed as a civil engineering project, he said it should be viewed as a complex system and integration project. He says that the focus on the civil engineering aspects of the job, which were brilliantly executed, were done at the expense of the complex integration process. He said this should prompt a change in the way engineers think about such projects with greater emphasis on programme rather than project management.

“Every year the schedule was revised but the end date was never moved.”

Indeed, Meggs said Crossrail really did not need to be as complicated as it became. He encouraged the government to adopt the line of thinking of his previous employer, BP, where he was head of technology, which emphasised simplification, standardisation and minimum viable product.

“It is just not something that we naturally do at the beginning.”

Crossrail’s failure in this regard is emphasised by the lack of coordination between contractors described by Raynsford as carrying out “vertical” contracts at individual sites and “horizontal contracts” by firms working on systems used across the railway, and the interfaces between them.

This is reflected in the signalling system in use across the complete 110km Crossrail system. While the Central Section relies on CBTC, the eastern and western reaches of the project to Shenfield and Reading, which use Network Rail infrastructure, harness the Train Protection Warning System (TPWS) and the branch to Heathrow is also fitted with ETCS. In addition, the integration of software between Bombardier class 345 rolling stock and Siemens CBTC equipment has proven particularly problematic. Meggs described the decision to proceed with such an arrangement between two competing companies in the first place as a “really, really bad idea.”

Work to unravel the difficulties of this relationship and better align the two manufacturer’s work, which has taken place since the start of the new management team’s tenure, a so-called plateau arrangement, has proven to be effective. Indeed, commenting during the Q&A session, Mr Will Tanner, director of public affairs and public relations at Bombardier UK, said that this closer collaboration should have happened much earlier.

Improving this integration across the project as a whole has been a major focus of Crossrail Ltd for the last six to eight months according to Meggs, a process which he reports as being a major success and contributing to the recent improvements in productivity.

While regretting the cost overruns, Meggs says the benefits offered by the fully operational system still far outweigh the additional expenditure. Ultimately, he believes that these will be viewed as short-term problems when passengers finally get to use London’s new railway, hopefully in around 18 months’ time.