Facing growing passenger and freight traffic with limited options to increase capacity, the Czech Republic is turning to the development of new high-speed lines as a way to improve connectivity across the country. 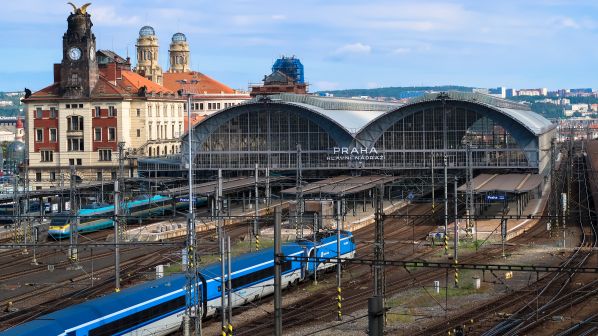 The new high-speed network will improve capacity across the conventional network, which is currently struggling to meet demand. Photo: Shutterstock/Olga Oggi

Sitting in the centre of Europe and surrounded by five major countries including Germany, Poland and Austria, the Czech Republic holds an important position when it comes to facilitating transport across the continent. But this also poses challenges for a network that still has a maximum operating speed of 160km/h and is facing increasing demand.

On the back of growing passenger and freight traffic, the country’s rail network was coming under increasing strain, at least until the coronavirus pandemic struck. In 2019, national operator Czech Railways (CD), which has 90% of the market, carried 182 million passengers, with average journey distance and train occupancy both increasing by about 10% compared with 2018.

This strain on capacity is compounded by the nature of the network under the control of infrastructure manager SZ, formerly SZDC, which continues to carry mixed traffic on the same lines. “We have a different situation from Germany or Austria, where they have segregated lines for different types of traffic,” SZ director of international affairs, Mr Radek Cech, explains. “We don’t have this - we use the same tracks for all types of trains. On the line to the east (of Prague) we have trains every two minutes, but it’s also about the type of train, fast, regional or freight trains, which makes it very difficult.”

This tight headway means that any delay can have a domino effect, causing significant disruption to other services.

To solve this capacity challenge, the country is looking to build a series of high-speed lines. The initial emphasis is on bypassing the most congested sections of the network, before developing these connections into a three-line network. The new network will serve only long-distance passenger trains, freeing up space on the conventional network for local and regional passenger services and freight trains.

The plan has been in the pipeline for years, but the programme for developing the high-speed rail network took a major step forward after receiving approval from the Czech government in May 2017. The government resolution called for a network with a speed of between 300-350km/h, where feasible, that would improve access to affordable transport services, strengthen the Czech Republic’s international competitiveness, reduce the environmental impact of transport, and improve accessibility to regional centres and international cities.

Decreasing the travel time between city centres has the additional benefit of improving economic activity by bringing workers residing outside of cities within commuting distance of more jobs.

The highlight of the project is the Prague - Brno - Ostrava high-speed line, which will include the Brno - Breclav branch to the south. The V-shaped line will bring Jihlava and Brno within less than 30 minutes of Prague.

“It will be built section by section, and for every section it will be possible for the trains to leave the new line to re-join the existing network.”

A second segment of the project, which is being developed in cooperation with German Rail (DB), will see the construction of a line south from Dresden to Prague. This project, which is still in the development stage, will include a tunnel beneath the Ore Mountains near the village of Stradov. The line is expected to run south partially underground, with an underground station at Ústí nad Labem and in tunnel to Litomerice from where the line will continue on a dedicated alignment to Prague, where its entry point is yet to be decided.

While these studies are ongoing, the early results show a strong need to construct key sections of the network as soon as possible. The Czech Ministry of Transport subsequently gave approval for the next phase of these sections’ development process to take place concurrently with the feasibility studies.

“This project has benefits without the full system,” Cech says. “It will be built section by section, and for every section it will be possible for the trains to leave the new line to re-join the existing network.”

The first section which is set to move forward is the 23km Prague - Porícany section of the Prague - Brno high-speed line. This will run from Prague-Bechovice, a suburb on the eastern outskirts of Prague and will increase capacity from the east.

In January, SZ published a tender to prepare documentation to apply for planning permission for the section, which was followed in April with a repeat tender that reflected the questions and objections raised by the industry during the process launched in January.

The tender includes an environmental impact study, as well as an option to undertake the work required to receive approval for both studies. The 14-month contract, which is worth around Koruna 240.5m ($US 9.6m), will be awarded under the best value approach/best value procurement (BVA/BVP) model, and not necessarily according to the cheapest bid.

On May 11, SZ and German infrastructure manager DB Network released a tender to undertake the project management for the Dresden - Prague line during the pre-project preparation phase from 2020 to 2024.

The Czech government has budgeted €10m in 2020 for the planning and development stage, and SZ is planning to apply for funding through the European Union’s Connecting Europe Facility (CEF) to construct the lines, as they will form part of the TEN-T network.

“The CEF fund is logical because it’s not only a national project, it’s also connecting Vienna, and other parts of Europe and southern Europe including Italy, Austria and Hungary,” Cech says. “On all of these lines you can run international trains between the European capitals.”

“Our French colleagues came here and together we prepared special standards for Czech needs that are based on French experience.”

In April 2019, SZ signed an agreement with French National Railways (SNCF) to support the development of a planning framework for high-speed lines in the Czech Republic. SNCF was selected as a partner based on the outputs of SZ’s High-Speed Rail Technical and Operational Study, which found the French network, designed solely for passenger services, was closer to the needs of the Czech network than others such as Germany, which carries both passenger and freight.

For the Prague - Dresden line, SZ is working with DB to develop a common standard which matches German standards and enables cross-border interoperability.

All lines will be equipped with ETCS Level 2, which is expected to be rolled-out across 461km of the conventional mainline network by the end of this year. Under the Czech national ETCS implementation plan, trains without ETCS will not be allowed to operate on ETCS-equipped routes from January 1 2025.

The contracts to build the lines will be let through European-wide tenders, with SZ looking to the major players in high-speed civil engineering to take part in the construction phase. The project could also be an opportunity for local businesses to increase their expertise. “It may be a good chance for them to participate, but they may need to partner with other European companies,” Cech says.

Through the development and construction phase and on to its eventual opening, the high-speed project looks set to change the Czech rail landscape forever.