The visit of a record-breaking TGV train to the Czech Republic this summer threw the spotlight on the country’s ambitions to build a high-speed network, which is now a priority for both the government and infrastructure manager SŽ. Quintus Vosman rounds up the latest developments. 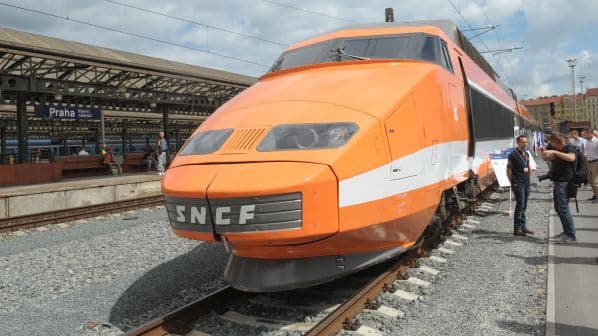 TGV set no 16, a member of the original fleet for the Paris - Lyon high-speed line which set a new world rail speed record of 380km/h on February 26 1981, arrived in Prague late in the evening of June 5. The next day the train was presented to the public, following a ceremony attended by the CEO of infrastructure manager SŽ, Mr Jiři Svoboda, as well as the minister of transport, Mr Martin Kupka. SŽ estimates that 20,000 people saw TGV no 16, withdrawn from service in 2018, during its subsequent five-day tour which included visits to Brno, Jihlava and Ústí nad Labem.

The TGV visit hints at the future of rail in the Czech Republic. The country is now looking to build its own high-speed network to relieve conventional routes that are now at the limits of their capacity, especially for freight, while improving the quality and speed of its fastest passenger services.

“This is the largest infrastructure plan in the history of the independent Czech Republic with an estimated cost of approximately Koruna 700bn ($US 30bn),” Svodoba said.

“This is not a dream, we have a specific plan,” said Kupka. “High-speed lines hold great promise for passengers, cities and towns, the whole economy and society. Without exaggerating, it will be one of the biggest transport revolutions that has ever happened in our country.”

SŽ has concluded an eight-year cooperation agreement with French National Railways (SNCF), believing that its fellow infrastructure manager SNCF Network will be the most appropriate partner, given the similarity between the two countries. It is keen to learn from SNCF as the pioneer of high-speed rail in Europe, despite the Czech Republic’s closer geographical ties with the railways of Germany and Austria.

The main goal of the high-speed rail publicity campaign is to generate support in the political arena and wider Czech society, while developing high-speed projects to the point where financial backing can be sought from the relevant institutions. The Czech government aims to obtain as much funding as possible from sources including the European Union (EU), the European Investment Bank (EIB) and others, while at least 50% of the funding required will come from the national budget.

“We see the introduction of high-speed rail not only as a great challenge, but also as an opportunity for the Czech Republic,” says Czech Railways (ČD) CEO, Mr Michal Krapinec. “It will primarily transfer a large number of journeys from the private car to environmentally-friendly rail. Within the European context, the introduction of high-speed rail in the Czech Republic will support the trend towards replacing short-distance flights with more energy-efficient trains.”

“High-speed rail is certainly a great opportunity and it will be revolutionary, not only for operators, but also for passengers.”

The Czech high-speed programme has an important international dimension, as it will help to cut journey times from Berlin to Prague, Brno, Vienna, Bratislava and Budapest, and also for services via Brno to Ostrava and Kraków. New lines will have a maximum speed of 350km/h and will be open to all operators on the Czech network.

“Future investment in high-speed can help to improve the attractiveness of rail in the Czech Republic if undertaken in a European context and in consultation with the private sector,” says Mr Peter Köhler, CEO of Czech private operator Leo Express. “A fair competitive environment with opportunities for public and private investment is a prerequisite.”

Fellow private operator RegioJet is also looking to benefit from faster rail services. “High-speed rail is certainly a great opportunity and it will be revolutionary, not only for operators, but also for passengers,” says RegioJet CEO, Mr Radim Jančura. “We want to participate in the development of rail and faster transport.”

Two high-speed lines are earmarked for rapid implementation as plans are developed for other routes. They will form a corridor running from northwest to southeast across the country, and will be used by both domestic and international services.

The highest priority is given to the line between the Czech Republic’s two major cities, Prague and Brno. The route will be 220km long and has an estimated cost of €13bn. Following the positive outcome of a feasibility study, SŽ has already started tendering for planning work and environmental impact studies.

The first section of the Prague - Brno line will run from the capital for 29km to Pořičany on the busy three-track main line from Prague to Kolin. There will be a new high-speed station at Prague East, providing interchange with other rail services and Prague’s urban transport network, while offering easy access by road. At Pořičany there will be a connection to the conventional network, enabling trains to serve Kolin, Pardubice and Hardec Králové.

The line should be suitable for 350km/h operation, but in practice train speeds will not exceed 320km/h at first. SŽ envisages passenger-only operation with different train types all having a maximum speed of at least 200km/h, which would allow a variety of operators to use the new route. There will be sufficient capacity for 10 trains per hour per direction. The fastest journey time between Prague and Brno is expected to fall to under one hour, the current best being 3h 22min due to the diversion required by the 12-month closure of the route between Brno and Česká Třebová. The Prague - Brno high-speed line is expected to be used by 60,000 passengers a day.

“The concept of high-speed rail is preferred in the Czech Republic, with connections to the conventional railway network.”

The new line will have strong network effects and should result in considerable improvements to train services from Prague to the eastern and southeastern regions of the Czech Republic. An extensive upgrade for 200km/h operation is planned between Brno and Přerov to cut journey times to Ostrava. Journey times to Vienna, Brastislava and Budapest will be reduced by the construction of 320km/h high-speed infrastructure towards Břeclav as far as Rakvice. Work is scheduled to start in 2025.

“The concept of high-speed rail is preferred in the Czech Republic, with connections to the conventional railway network, will make it possible to benefit from the advantages of trains operating between 200km/h and 300km/h to provide services to a wide territorial area and many regional centres,” Krapinec says.

ČD is already preparing for faster services, having introduced rolling stock with a maximum speed of 200km/h and is now ordering locomotives and coaches capable of operating at up to 230km/h. “In the future, with start of operations on high-speed lines, we will also complete the fleet with modern vehicles for speeds between 250km/h and 300km/h, and possibly even higher if required,” Krapinec adds.

On the Prague - Brno route, civil works are expected to begin around the end of 2025 on the section from Prague to Poříčany. According to SŽ’s schedule, this would be followed in 2027 by sections of the high-speed line in Central Bohemia and near Brno. Construction through the mountainous Vysočina region is then planned for 2029, with the entire Prague - Brno route in service in 2032.

Across the border to Dresden

The second route in the Czech Republic’s high-speed programme runs from Prague north to Ústí nad Labem, the German border and Dresden. The only section close to execution is the section from Ústí nad Labem to the border, crossed by the 30km Krušnohorský tunnel under the Erzgebirge mountains which will be built by SŽ in cooperation with German infrastructure manager DB Network. Trains will emerge near Heidenau in the southeast outskirts of Dresden.

The section between Ústí nad Labem and Dresden will not only shorten the distance by rail between the two cities and cut journey times, but will also release capacity on the existing route that follows the meandering River Elbe. It is expected that there will be a shuttle passenger service between Dresden and Ústí nad Labem once or twice an hour, but freight trains are likely to stay on the existing route as providing freight paths on the new line alongside the planned passenger service may be difficult. The German state of Saxony is strongly supportive of the project and is putting pressure on the federal government to provide funding to improve the most important rail border crossing to the Czech Republic.

Between Prague and Ústí nad Labem, planning and design of the 110km high-speed line is now underway, but final decisions are still to be taken. This section has an estimated cost of €6bn. The route starts in the northern outskirts of Prague where a new high-speed station is planned. After crossing the River Vltava near Veltrusy there will be a junction with a direct line to Most with an intermediate station at Louny. This will be a major improvement to the passenger service between Prague and the northwest of the Czech Republic, a region that at present suffers from poor rail connections due to the lengthy detour routing via Pilsen or Ústí nad Labem.

The route to Ústí nad Labem continues northwards to a high-speed station on the outskirts of Roudnice nad Labem. Further north near Lovosice mountainous terrain begins and a long tunnel is needed to reach Ústí nad Labem where there will be a station in the city centre.

Construction of the high-speed line between Prague and Ústí nad Labem is scheduled to start in 2027 and operation is expected to begin in 2031. The new line will have capacity for between four and six trains per hour in each direction, and passenger rolling stock must be suitable for operating at 200km/h as a minimum. The journey time from Prague to Ústí nad Labem will be cut from 1h 10min to 25 minutes, and between Prague and Dresden to under 60 minutes. SŽ is considering whether freight trains will be permitted to use some sections of the new line.

Looking to the longer term, SŽ is conducting a feasibility study for a high-speed line between Prague and Wroclaw in cooperation with Polish infrastructure manager PKP PLK. This line is expected to open some time in the 2040s. High-speed projects in the east of the Czech Republic would provide more capacity and shorten journey times, including a 320km/h route from Přerov to Ostrava that would enter service after 2030.

The Czech high-speed programme will bring major benefits to the national network and to international links. The final decision has yet to be made to take the first step and proceed with construction of the Prague - Brno route, but SŽ is positive and is aiming to start work on the first section between Prague and Pořičany in 2025. Of course, this is dependent on securing financing for the project. If agreed, the signal will turn green and the first steps can be taken to build a high-speed network in the Czech Republic.