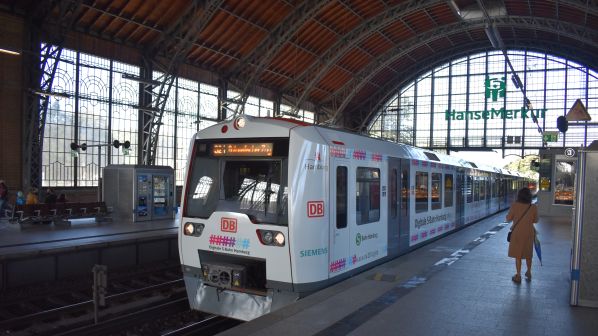 Two class 474 S-Bahn trains arrived at Hamburg Dammtor. These carried passengers to Bergedorf using ATO over ETCS Level 2 at Grade of Automation 2 for part of the journey.

PASSENGERS walking up the stairs to the platforms at Hamburg Dammtor mid-morning on October 11 could have been forgiven for being confused by the destination “Weltpremiere” (world premiere) showing on the information screen.

But that is indeed what was due at platform 2 at around 11.00 that morning. The procession of German Rail (DB) S-Bahn trains was interrupted by a pair of white class 474 EMUs that were about to make history. The six-car train was being used by DB and Siemens Mobility to demonstrate the first S-Bahn to operate autonomously by using ATO over ETCS Level 2 at Grade of Automation 2 (GoA 2).

DB and Siemens invited guests to travel on the train between Hamburg Dammtor and Bergedorf. During this journey, the train demonstrated both highly-automated and fully-automated operation on the 23km section of Line S2/S21 from Berliner Tor to Aumühle. Before it reached Bergedorf (the final station on the route), the train transitioned from manual operation to highly-automated operation with ATO between Berliner Tor and Rothenburgsort. This was achieved simply by the driver pressing the ATO button in the cab.

This demonstration was part of a project to deliver the world’s first standalone 5G system for automatic train operation in Hamburg as part of DB’s highly automated S-Bahn operation project.

An agreement to develop a fully automated S-Bahn line by 2021 was signed by DB, Siemens and the city of Hamburg on June 12 2018. DB board member for infrastructure, Mr Ronald Pofalla, called the agreement a “milestone” and that “it marked the launch of the biggest technological change in years.

“This project will be an important reference for designing and developing the intelligent and climate‐friendly rail networks that we need, especially in large cities,” he said at the time of the contract award.

DB followed this announcement by selecting Nokia in December 2019 to test and implement what the telecommunications company says is the world’s first 5G network for a mainline rail automation project. The 5G system has been developed using 3GPP standards.

The need to improve the digital aspect of railway operation is driven by asset-intensive industries such as railways increasingly looking at opportunities created by mobile broadband as a way to enable digital transformation. This has pushed the International Union of Railways (UIC) to actively develop the 5G-based Future Railway Mobile Communication System (FRMCS) to replace GSM-R, which is based on 2G technology, by the mid-2030s when GSM-R will be obsolete.

Introducing this technology on the S-Bahn network in Hamburg enables up to 30% more trains to operate on the existing tracks, says Mr Jan Schröder, DB project leader. He also claims these trains will operate in a more punctual and even more energy efficient way.

When the initial contract was awarded, 750,000 passengers per day were using the Hamburg S-Bahn system. Currently there are around 1.84 million people living in Hamburg and this is expected to reach 2 million by 2040.

ATO calculates an optimal speed, controls the train’s drive system and brakes based on the current timetable situation and lineside data. The vehicle receives the distances it is allowed to drive and its permissible speeds via radio signals and makes sure these are maintained. Data is exchanged between the train and block control centre via a radio link. Under GoA 2 the driver remains on board to monitor operation and will only intervene should there be a disturbance in the operation. At the same time, ETCS monitors train movements and speed limits thus allowing trains to operate safely at shorter headways and making optimum use of track capacity.

The initial aim of the trial is to demonstrate driverless shunting of trains at Bergedorf station, which is conducted based on the transmission of train control information over the 5G network. The operation involves trains leaving one platform and running back into another covering a distance of 1000m. This process takes place at GoA 4, meaning there is no driver onboard the train.

The 23km section used for the demonstration was modified in three sections. First, the existing electronic interlocking in Bergedorf was equipped with technology from Siemens Mobility for deployment over ETCS. This protects the track. Secondly the ETCS trackside equipment comprises technology that has been integrated with the track bed and an ETCS block control centre located in the Bergedorf interlocking building which monitors the trains. Finally, for the automated driving functions, another computer is located in Bergedorf that transmits the timetable and line data to the trains.

During the demonstration journey, when the train arrived at Mittlerer Landweg station, the automatic opening and closing of the train doors was demonstrated. The ATO system opens the doors automatically after ETCS indicates that the train has stopped safely in the correct area. ATO also closes the doors before the train restarts its journey.

On-board the train, Schröder explained that the additional capacity results in greater reliability because disturbances can be better compensated for. He said delays can be returned to punctual operation much more quickly, albeit with limitations. If there is a problem, then the impact is not as damaging as it might be currently because the technology is able to get the service up and running again quickly using the data from the planned timetable.

Mr Boris Dickgiesser, Siemens Mobility project lead - digital S-Bahn, pointed out that what makes the Hamburg trial different is that it is an open system instead of an island solution.

Dickgiesser explained that the technology fitted to the class 474 EMU is based on the latest European standards. He also said that through the introduction of this technology trains will be able to learn to optimise their own operation.

Ahead of the train performing its shunt at Bergedorf, Siemens Mobility CEO, Mr Michael Peter, told IRJ that the next step was to secure additional orders. He said the train was chosen deliberately because it was not built by Siemens but Alstom (formerly Bombardier), demonstrating the technology’s compatibility in all operating scenarios - the set in question is 15 years old.

Our plan is to go to every country where we have the requirements for such a solution to optimise the railway networks. This is a solution which is available for the whole benefit of mainline railway traffic.

The ATO equipment is housed beneath the vehicle to optimise space. This design also facilitates straightforward retro-fitting and means there is no need to reduce capacity on-board the train. Schröder says the technology can be deployed on ICE high-speed trains and any urban train, independent of type and line conditions.

Four trains equipped with ATO over ETCS are set to begin operating in passenger service this month after approval was received from the German Federal Railway Authority (EBA).

Further deployment will take place from 2025 when Alstom is scheduled to begin delivery of a fleet of 64 class 490 S-Bahn trains equipped with ETCS Baseline Release 2 and ATO at GoA 2 under a contract signed in September. This will be the first time that ATO has been installed in new S-Bahn vehicles.

Beyond Hamburg, DB’s goal is to equip its entire network with the technology. Other S-Bahn networks in Stuttgart and Cologne are set to follow, while Siemens Mobility hopes to sell it across the globe. “Our plan is to go to every country where we have the requirements for such a solution to optimise the railway networks,” Dickgiesser says. “This is a solution which is available for the whole benefit of mainline railway traffic.”

At a time when the rail industry is clamouring for more capacity, while trying to meet its decarbonisation targets and having to contend with tightening budgets following the Covid-19 pandemic, this solution being trialled in Hamburg could yet help revolutionise rail travel. The international rail community will certainly be watching with interest.