Norway has completed its first tunnel using slab track near Bergen on the main line to Oslo. The project faced several challenges which led to some innovative solutions. Written by Alexej von Glasenapp and Javier Cabeza. 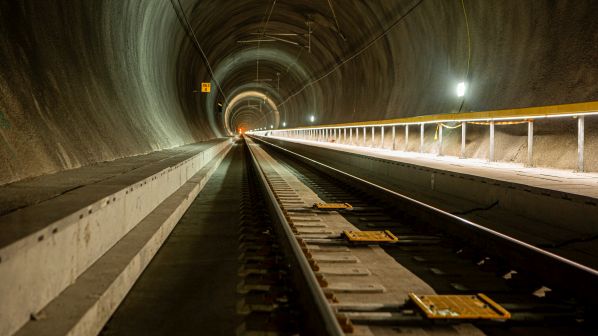 Norway has completed its first tunnel using slab track near Bergen on the main line to Oslo. The project faced several challenges which led to some innovative solutions.

NORWAY’s infrastructure manager Bane Nor opened a second Ulriken tunnel between Fløen in Bergen and Arna on the main line to Oslo on December 13 2020. The single-bore tunnel is the first in Norway to have slab track. The new tunnel is located alongside an older tunnel with ballasted track, which is now closed until 2023 for renovation. The NKr 4.4bn ($US 530.7m) Arna-Fløen project was initiated in 2014 and is scheduled to be completed in its entirety in 2022.

“The main reasons for the new tunnel was to increase train frequency between Bergen and Arna, to transport more goods and to achieve higher train routing capability and enhance train schedule flexibility,” says Mr Torbjørn Søderholm, the project manager with Bane Nor in Bergen.”

The new Ulriken tunnel was initiated from the Arna side using both blasting and drilling. This was the first use of drilling for a railway tunnel in Norway. The first 765m of the 7.8km tunnel were blasted using the New Austrian Tunnelling (NAT) method as this section contains additional tracks, while the remaining 7km were constructed using a tunnel boring machine (TBM). In addition, two diagonal tunnels situated 500m apart were blasted between the new and old tunnels so that trains can cross between them and provide a route for passenger evacuation during an emergency.

In 2016, a delegation from Bane Nor travelled to the InnoTrans exhibition in Berlin to invite European construction companies and track system suppliers to participate in a Bane Nor conference held in Bergen in October 2016 regarding the upcoming tender. The event was attended by 57 companies from all over Europe.

“By reducing the tunnel diameter provided by the TBM and then subsequently building a ballastless track, which requires less space than ballasted track, there will be considerable costs savings.”

Mr Torbjørn Søderholm, the project manager with Bane Nor in Bergen

“We tried to understand ballastless track technology and its benefit from the know-how of experienced construction companies,” Søderholm says. “The project team realised early on that it was crucial to enter into dialogue with European track system suppliers in order to attract qualified companies to participate in the upcoming tender. After a prequalification phase, we usually aim to have five to seven tender participants and several rounds of negotiation. In general, we usually have a combination of qualitative and price elements, which are considered in evaluating the best offer.”

Azvi, Spain, was awarded the tunnel contract, which included design and installation of the ballastless track, in February 2019. The company has been involved in the construction of almost 500km of high-speed lines, including lines with tunnels in Spain.

The contract included track and superstructure, overhead catenary, low and high voltage systems and telecommunications. The work consisted of implementing the railway-technical systems in the new tunnel (apart from the signalling) and connecting to the existing systems in Fløen, adapting the existing systems in the existing tunnel due to the installation of a new interlocking and connections between the new and the existing tunnel. The project also included track upgrading, new catenary, low-voltage and high-voltage system and telecommunications at the new Arna station, as well as 3km of ballasted track at Arna station and in the inter-tunnel connections.

The selected Rheda 2000 slab track system developed by Rail.One is one of the world’s most widely used ballastless track systems for both high-speed and high-performance lines and has been installed on over 4500km of lines in Europe, the Middle East and Asia. It is often implemented in tunnel installations, in which construction related logistics and component transport are often critical bottlenecks.

Rheda 2000 consists of modified prefabricated bi-block concrete sleepers with lattice girders concreted into an in-situ concrete layer, to form a monolithic concrete track supporting layer, which provides a solid structure. The type B355.3 bi-block sleeper for Rheda 2000 is suitable for several types of fastening and can be modified to meet local requirements.

Construction of the slab track included the distribution of rails and bi-block sleepers along the tunnel, construction of the track panel, track lifting and shuttering after fine alignment, concreting and flash-butt welding.

The foundation provided by the concrete base-sockets enables loaded construction vehicles to use the rails without difficulty before they are accurately positioned and secured in place. As a result, it is possible to lay the track in single-sleeper mode or as assembled track panels. The rails are mounted on a specific number of supporting points (sleepers) which serve as a temporary tie rod to maintain the gauge during the track installation and during service life in monolithic combination with the track concrete layer as a load bearing system. Rails were welded using the flash-butt method.

In addition, concrete with synthetic fibre content was used for the project together with special frost resistant concrete close to the tunnel exit in Fløen.

Another major engineering and construction challenge was the installation of floating slab track in the tunnel area under Haukeland hospital in order to minimise noise and vibrations. On the Fløen side, the tunnel has less covering and Haukeland hospital is located just above a 600m-long tunnel section located on a curve. Azvi designed the Rheda 2000 slab track as a mass-sprung system (MSS) in this section by combining Pandrol elastomer mats and Pandrol FCA fastenings with a total track height of about 546mm on the righthand side.

“The main challenges during the construction process were the tight time schedule required to complete the project as well as the complex logistics and coordination to be managed inside a single-track tunnel with a 3.44m wide access road and with several contractors working on different disciplines at the same time,” says Azvi’s project manager, Mr Javier Cabeza. “These constraints demanded very detailed planning and rigorous performance of tasks by both Bane Nor and our team that finally allowed the accomplishment of all the requested deadlines.”

“Bane Nor has taken the decision to implement ballastless track systems in two major tunnel projects, which are the first of their kind in Norway.”

Safety was high priority for Bane Nor, as Søderholm explains: “We try our utmost to reduce the amount of accidents and the risk of incidents occurring. We learnt in the project that you must check and supervise how the workers can be safely transported into a tunnel. You must keep in mind that tunnel projects are especially challenging from a logistics point of view and that there are a lot of movements which need to be handled professionally.”

The Covid-19 pandemic also posed a big challenge for the project during the last six months of construction. Due to new regulations, foreign staff working for construction companies had to remain in quarantine when returning from a trip abroad. “We were able to work very well with Azvi regarding this and to proceed with the project without any relevant interruptions,” Søderholm says. “Bane Nor in close cooperation with Azvi also implemented extra measures to reduce the contamination risk for the on-site construction workers.”

Søderholm says several important lessons were learnt from the project. “When introducing multi-disciplinary projects, the project information management system (Pims) is especially important and was added during the tender negotiation phase. We recommend including Pims as a requirement in the tender documents right from the start. Pims obliges the participants to focus and highlight all relevant process steps required in complex tunnel projects. The Tilos planning and scheduling software helped us during the project to estimate and calculate process times and the detailed location. I believe that the detailed planning tool adds a lot of value in tunnel projects.

“Bane Nor has taken the decision to implement ballastless track systems in two major tunnel projects, which are the first of their kind in Norway. All new tunnel projects will consider the possibility of implementing ballastless tracks. There are advanced plans for several future railway projects on the Oslo - Bergen main line, with additional second tracks, new tunnels and bridges. Bane Nor plans many major railway projects in the next 10 years and Norway also offers many exciting tunnel projects,” Søderholm concludes.