DANISH State Railways (DSB) is to retain its six remaining class EA electric locomotives to allow IR4 emus to be cascaded to Copenhagen - Esbjerg services when electrification of the Fredericia - Esbjerg line is completed in 2015. 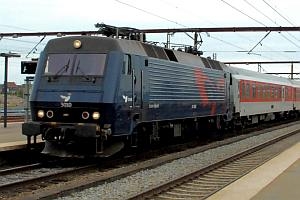 The transfer of IR4 trains to Esbjerg services will release six IC3 three-car dmus to strengthen intercity trains on unelectrified routes such as Fredericia - Aarhus, where additional capacity is urgently needed.

The EAs, which are the only remaining electric locomotives in the DSB fleet, will be used on double-deck regional trains in Zealand. For this new role they will be refurbished at a cost of around DKr 50m ($US, 8.8m) which will include the installation of ZWS control for push-pull operation.

DSB received 22 of the 4MW locomotives from Henschel, Germany between 1984 and 1992, 10 of which were sold to German Rail in 2001 as part of the privatisation of DSB's railfreight subsidiary. These locomotives, together with a further six sold by DSB in 2007 to open-access operator Bulmarket, are now used in Bulgaria.

DSB's six remaining EAs are currently underutilised, operating just one daily return working between Copenhagen and Padborg and one international overnight train. They also see occasional freight use, on hire to DB Schenker.