Dubai Metro’s $US 2.9bn Red Line extension was inaugurated on July 8 and will open in September, four years after construction started. Alstom vice-president Müslüm Yakisan tells Oliver Cuenca how it was managed. 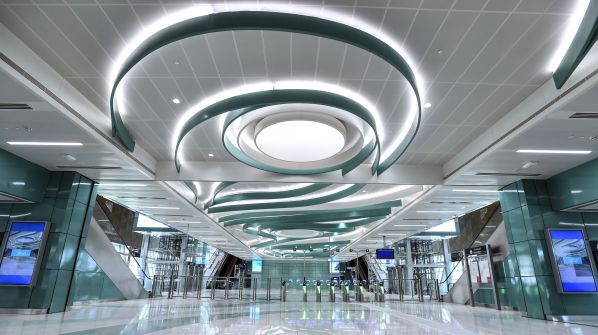 Work on the 15km Route 2020 extension was undertaken by a consortium including Alstom, Acciona and Gülermak.

THE 15km Route 2020 extension includes 11.8km of elevated and 3.2km of underground track and will provide a major transport link for an estimated population of 270,000 people, as well as a direct route between Dubai International Airport and the site of Expo 2020.

Work on the line, which winds its way westward from Jebel Ali, began in July 2016 under a tight four year schedule and was carried out by the Alstom-led ExpoLink consortium, which also includes Acciona and Gülermak.

According to Mr Müslüm Yakisan, Alstom’s vice-president for Africa, the Middle East and Central Asia, what makes the region unique is its high standards and tight timescales. However, Dubai’s Road and Transport Authority (RTA) provided ample support to achieve these targets, even pairing Alstom with original Red Line ATO contractor Thales to streamline the implementation of signalling.

The project faced some disruption during the coronavirus pandemic, albeit not as much as similar projects such as Paris’s Grand Paris Express project, which ceased most work between March and June. The project’s tight timetable meant that by that stage, most work was finished.

“Things were not hunky-dory, but Dubai was very focused on supporting the rail and construction industries,” Yakisan says. “We were in the testing and commissioning phase, but travel was restricted.”

During this stage, Alstom usually deploys international specialists to carry out training. “We had to use remote working for a lot of activities, which would never have happened in the past because people would have been very reluctant to buy a training service like that.”

“The existing line isn’t too old, which did certainly make upgrades somewhat easier,”

As project leader, Alstom was responsible for integrating the new line into the existing system. This required extensive work - both on the extension, and the existing Red Line - including the installation of new systems for signalling and communications, new power infrastructure, platform screen doors and automatic ticket control, as well as extensive track work.

“The existing line isn’t too old, which did certainly make upgrades somewhat easier,” Yakisan says. “One of the biggest challenges was minimising disruption. For example, we had to demolish and reconstruct parts of the existing viaduct and had to provide alternative transport.”

“We have to demonstrate that for the expense, there is an economic benefit.”

However, installing the system requires careful analysis of the metro network to ensure that there is a clear cost-benefit.

“When implementing it, you must have a clear understanding of timetables, fleet sizes at any given time of day, and what the technical parameters there are of everything on the track,” Yakisan says. “We have to demonstrate that for the expense, there is an economic benefit.”

Hesop has previously been implemented on metros including Milan and London. “We were lucky because RTA had asked us to upgrade their existing substations, which allowed us easily to introduce the system for Dubai,” Yakisan says.

The trains can carry up to 700 passengers each and feature large doors, LED lighting and electronic passenger information. Unusually, the trains accommodate three separate classes - Gold, Silver and Family - provided at the behest of the RTA. However, despite being unusual, Yakisan explains that accommodating for this quirk was not too difficult.

“RTA had a very clear idea of what they wanted,” he says. “But ultimately, it’s the same as for all our clients - to maximise capacity within existing limitations such as platform lengths and gauges.

“Nowadays, interior configuration starts with effectively an empty tube. Years ago, you had compartments and gangways, but now it’s just about finding a balance between passenger needs and technological ones such as cables and air ducts.”

Yakisan sees a bright future for the rail industry in the Middle East and believes it offers huge potential. Since 2000, the region has become a core focus for Alstom. The company is also currently involved in the construction of part of the Riyadh Metro, expected to open later this year.

“It’s breathtaking how the industry has developed there,” Yakisan says. “We now have about 2500 local suppliers in the region. In the past two decades, the Middle East has become not just a recipient of rail technology, but a net provider.”