East African countries have been keen to accept international funding, particularly from China, to build new standard-gauge railways rather than upgrading existing lines. However, as Shem Oirere reports, there are serious doubts over the long-term viability of these new lines. 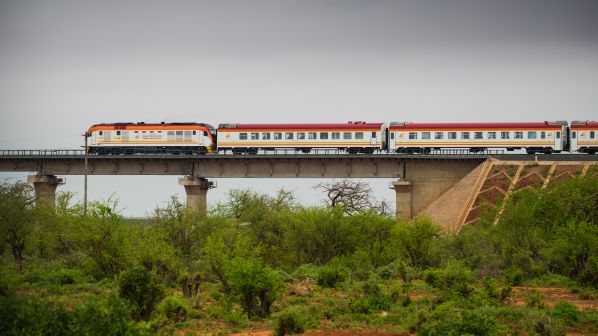 New standard-gauge railways in East Africa have been financed by international funding.

THE value of current railway projects in East Africa has risen to more than $US 12.1bn as governments take advantage of funding offered by foreign investors to build new standard-gauge railways (SGR) rather than upgrading existing metre-gauge lines serving Ethiopia, Djibouti, Kenya, Uganda and Tanzania.

The first two SGR lines financed and built by China have opened linking Nairobi and Mombasa in Kenya and Addis Ababa, Ethiopia and Djibouti, and more projects are in the pipeline in these countries as well as Tanzania and Uganda. However, rail freight’s share of the market remains below 5% across the region and there are concerns about the economic value of ongoing and recently completed projects.

The development of rail projects comes at a time when nearly all East African countries are experiencing a surge in economic growth, although the two developments are not related.

However, this growth does not correspond with revenue collection in these countries and railway budget allocations for 2018. Tanzania, Kenya, Uganda and Ethiopia face budget deficits for the 2018-19 fiscal year and have only allocated a small share of the total project costs for this year. For example, Kenya’s budget deficit in 2018 stands at $US 5.4bn, which equates to 5.7% of GDP. The share of national budget deficits for Uganda, Ethiopia and Tanzania to their GDPs stood at 4.8%, 3.3% and 3.4% respectively, and all four countries are financing the shortfalls through external borrowing.

Even with these deficits, Tanzania has allocated $US 611m this year for the construction of the 722km Dar es Salaam - Morogoro - Makutupora SGR line while Kenya has set aside
$US 734m in 2018-19 for construction of the 120km SGR line linking Nairobi to Naivasha. This is the first section of the second phase of the Mombasa - Nairobi - Malaba (Uganda border) SGR line.

East African governments have also embraced PPPs as an option to finance new railways, or in a few cases, rehabilitate existing lines.

Despite East Africa embracing the PPP model, China has emerged as the leading financer of rail projects ahead of international and African development finance institutions (DFIs). Indeed, China is financing one in every four East African construction projects while governments in the region are funding 15.5%, international DFIs 19.7% and African DFIs 16.9%. Additional funding comes from private equity funds, equity financing from infrastructure project/ facility owners, and through PPPs.

China financed and built the Addis Ababa - Diredawa - Djibouti SGR in Ethiopia. In Kenya, China is also financing the $US 1.5bn Nairobi - Naivasha SGR line under a contract by China Road and Bridge Corporation, which built the $US 3.8bn Mombasa - Nairobi SGR line.

In Uganda, negotiations with the China Exim-Bank are expected to be completed soon to finance the 273km SGR line between Malaba and Kampala, which a Chinese company will build.

European financiers and lenders have worked on some railway construction projects in East Africa. For example, Turkey’s Yapi Merkezi arranged finance for the $US 1.7bn Awash - Weldiya - Hara Gebeya SGR line in Ethiopia that has attracted financing from a syndicate of lenders from Europe, the United States, the Middle East and Africa.

Other development partners are expected to finance five lots totalling 1575km for the Dar es Salaam - Mwanza SGR in Tanzania. Yapi Merkezi and Mota-Engil won the contract for the first two lots between Dar es Salaam and Makutupora.

An emerging issue is whether the new railways are economically viable. Just months after commissioning the 487km Mombasa - Nairobi SGR, doubt persists as to how it will carry enough freight to generate sufficient revenue to repay the Chinese loan. In an attempt to generate traffic, last year the Kenyan government instructed that all imports through Mombasa switch to rail.

“There are concerns that East Africa may not have adequate freight capacity that can make the new SGR lines economically viable,” says Mr Anil Bhandari, a Nairobi-based transport consultant. “Probably the first option for expanding rail transport in the region would have been to modernise the existing metre-gauge network.”

However, efforts by Rift Valley Railways, the concessionaire of the Kenya/Uganda metre-gauge network, to improve rail freight performance flopped despite a $US 305m investment programme. The concession has since been terminated by the Kenyan and Ugandan governments.

“Governments and development partners can meet project financing needs by better allocation of public resources to projects with the highest returns,” says Mr Jovin Mwemezi, a corridor development expert at the East Africa Community. “They can also broaden sources of financing and package more projects as PPPs.”

The Chinese seem set to stay in Africa, and according to Mr Uwe Wissenbach, the author of a recent working paper on the SGR, China is likely to continue to dominate infrastructure financing on the continent. “It’s a major business opportunity for Chinese companies as their home market is becoming saturated,” Wissenbach says.