In July Siemens celebrated the signing of a landmark contract that will take its next-generation low-floor LRV to the Middle East. Keith Barrow uncovers the innovations behind the Avenio. 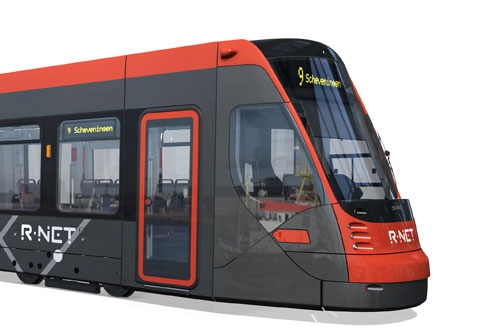 BACK in 2004, Siemens hit the headlines when it instructed operators of its Combino low-floor LRV to withdraw their fleets following the discovery of cracks in the aluminium bodyshells of some vehicles. Siemens found that torsion forces generated in S-curves were higher than expected, causing cracks around the articulation joints between the vehicle modules, and leading to costly rectification work on 475 first-generation Combino vehicles.

While this was undoubtedly a major setback for Siemens, it also presented a unique opportunity to gather valuable data which might benefit the development of future LRVs.

Siemens studied the actual load and operating conditions of 13 different light rail operators, pooled the results in a fatigue-strength verification study, and established the true mechanical strength of the body structure.

Siemens says that the use of real stress values meant it was able to design a lightweight body that is more capable of coping with the stresses of everyday light rail operation. The results were quickly put into practice on the Combino Plus LRVs supplied to Almada, Portugal, in 2005 and Budapest in 2006.

Historically trams have traditionally been built using multiple-articulation with a long wheel-less body section supported between two short car sections with rigid bogies. This asymmetrical arrangement puts huge stress on the articulating joints and the structure because the suspended section is exposed to strong transverse acceleration when cornering at speed.

With Combino Plus, Siemens adopted the concept of the single articulated vehicle, whereby each of the outer and intermediate sections has its own powered or unpowered bogie. This significantly improves performance in curves and allows production of a variety of different vehicle lengths - the 54m-long Combino Budapest is the longest passenger-carrying LRV in the world.

The latest generation Avenio LRV takes all this a stage further. Avenio retains the centrally-mounted bogie arrangement of the Combino Plus, but has longitudinally-coupled independent wheels, which are mounted in a frame unit instead of being connected by an axle. The traction drive units are mounted on the outside of the wheels, meaning they can be accessed easily for maintenance from the side of the vehicle without the need to remove the bogie.

Traditionally the driving wheels of a tram were connected transversely via an axle shaft. This means energy is wasted on curves due to friction because the outer wheel has to travel faster than the inner wheel. By removing the axle, the Avenio's wheels can rotate at different speeds, reducing energy loss through friction.

Furthermore, the bogie can rotate at up to 4.5 degrees, allowing it to move more freely in curves. Siemens says the torsionally-flexible bogie arrangement substantially reduces lateral forces on both the wheel and track compared with a conventional tram with multiple-articulation. A 2.65m-wide Avenio has a uniformly-distributed axleload of less than 10 tonnes and, according to the manufacturer, the reduced weight and improved structure means the LRV can travel up to 500,000km on a single set of tyres.

Particular attention has been paid to making the Avenio quieter than its predecessors. The reduction in lateral forces means less wheel and rail noise, while the traction drive is fully sprung to reduce noise and vibration, and ancillary units are de-rated or switched off when stationary. The braking system is completely electrical to reduce wear, and mechanical brakes are used only for parking or in the event of an emergency application.

The vehicles feature steel bodyshells and the cab is compliant with EN 15227 crash resistance standards, with passive safety to protect pedestrians in the event of a collision.

Avenio is 100% low-floor with a maximum entrance height of 350mm, and passenger doors can be configured to cover up to 30% of the vehicle length to allow rapid boarding and disembarking. The modular configuration means vehicles can be supplied in lengths ranging from 18m to 72m and all bogies can be motorised if required. Because each 9m section runs on its own bogie, additional sections can be added easily and no auxiliary bogie is required for splitting the vehicles during maintenance.

When the Avenio concept was first unveiled in March 2009 it was indicated that Tel Aviv was likely to be the debut customer with an order for 72m-long vehicles, although the cancellation of the build-operate-transfer concession in 2010 means an order for vehicles has yet to be placed.

Last November it was announced that Hague Tramways (HTM) would be the first official Avenio customer after signing a €100m contract with Siemens for 40 bi-directional vehicles. The deal includes driver training, documentation, and spare parts, as well as an option for up to 40 additional vehicles. They will be assembled at Siemens' Simmering plant in Vienna and deliveries will take place between February 2014 and February 2015.

Another important breakthrough came at the end of July, when Siemens revealed it had received a €100m turnkey contract from the Qatar Foundation to equip the 11.5km light rail line that will link Education City with the Doha Metro. In addition to signalling and communications systems, electrification, and depot equipment, the contract includes a fleet of 19 Avenios, which will be equipped with the Sitras HES system for catenary-free operation.

The roof-mounted Sitras HES module combines a double-layer capacitor with a NiMH battery, allowing the vehicle to store both traction and braking energy. Power converters transform the three-phase current with a rated voltage of 11kV into the 750V dc required for charging the energy storage unit. The system will complete its charging cycle in just 20 seconds, taking power from charging points installed at each of the line's 25 stations, which will be fed by centralised rectifier substations.

The LRVs will also be adapted to operations in high temperatures, with a powerful air-conditioning system and sun shades to protect roof-mounted electrical equipment from radiant heat. The 27.7m-long vehicles will feature a 2.55m-wide bodyshell and will accommodate up to 239 passengers.

The line is due to open in autumn 2015 and will undoubtedly become a reference project for Siemens light rail technology in the region, as well as a global showcase for Sitras HES and Avenio itself. In the meantime, visitors to InnoTrans in Berlin this month will have the opportunity to inspect a full-size mock-up of the Avenio for The Hague.