Ensco will officially begin its contract to operate and maintain the Transportation Technology Center in Colorado on October 1. The company’s new president, Jeff Stevens, outlines the company’s plans for the facility, including for its expanded remit, to Kevin Smith. 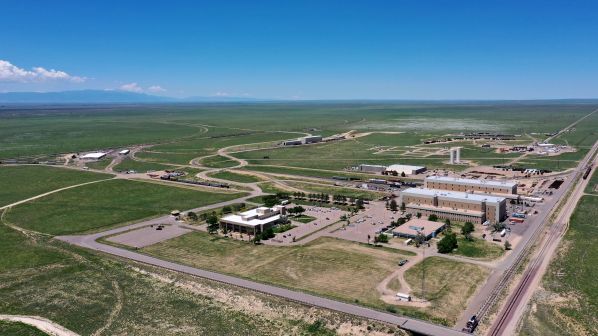 The Transportation Technology Center in Pueblo, Colorado, possesses more than 80km of track as well as extensive laboratory facilities for testing locomotives, vehicles, track components, and communications and signalling devices.

AS a regular visitor to the Transportation Technology Center (TTC) in Pueblo, Colorado, throughout his 23-year career with Ensco, Mr Jeff Stevens always hoped that one day he would be working at and be responsible for the world-renowned research facility. On October 1 that ambition will be realised.

Ensco is on course to commence an initial five-year contract to manage the site, which is owned by the US Department of Transportation’s (USDoT) Federal Railroad Administration (FRA). Stevens is the company’s new president, stepping up from his previous role as head of the Surface Transportation division, and is leading the entire business and its subsidiaries, including the teams that will oversee the TTC’s research and development, testing, and training facilities.

Ensco was announced as the recipient of the $US 571m care, custody and control contract for TTC in March 2021, which includes options for three five-year extensions.

Stevens says that as a technology company Ensco’s core business is instrumentation and testing, and it has partnered with FRA for nearly five decades. During the tendering process, it brought in experts on facilities management to bolster its expertise in this area as part of a wider partnership strategy (see below). And while the company conducted due diligence on the proposal to manage TTC like it would with any prospective opening, Stevens says ultimately “it was an opportunity to significantly expand our business and to continue the long standing collaboration we have with the FRA.”

Ensco will serve the following USDoT agencies at TTC:

Ensco has formed strategic partnerships with several companies to support its work at TTC. These include:

“We are super excited about what is about to happen,” he says.

TTC itself consists of more than 80km of railway test tracks and specialised laboratories for testing locomotives, vehicles, track components, and communications and signalling devices. However, the new contract is available to all USDoT agencies for their own research, testing and training activities (see panel), expanding the scope of the site significantly.

Under its contract Ensco is responsible for maintaining the Site Modernisation Plan, a five-year plan for the facility which is updated annually. Ensco and its private partners as well as the government will fund the necessary expansion of infrastructure and facilities outlined in the plan. And while there is no specifically defined commitment in the contract for an annual investment in the facility as there was with the previous custodian, Transportation Technology Center Inc (TTCI), now MxV Rail, Stevens reveals that several investments have already been confirmed to expand the TTC’s capabilities.

This includes an agreement with Ambipar Response USA to build a new emergency response training centre at the site for emergency first responders and industrial workers, which will emphasise addressing hazmat incidents and response. Construction of this facility is reflective of a heavy focus on training in the future, according to Stevens, who says there are also plans to build a new federal training facility at the site. He says multi-week training courses on cybersecurity are already being offered to surface transportation inspectors at TTC, which reflects its changing focus.

Stevens says other expansions at the site will align with industry needs and government priorities. Among them is the infrastructure to support low and zero emissions vehicle testing, 5G communications infrastructure, and improved technologies to conduct level crossings testing. “The site has been underutilised in human factors related studies across all railroads so that’s another priority for us,” he says.

While TTC’s remit has broadened, Stevens is keen to underline that Ensco and TTC will continue to serve the railways, and “all of the work that has been going on for decades,” adding that the company has received “overwhelmingly positive support from railways and suppliers to continue their work at TTC.”

“We have a vision to modernise the site so the users of it have an overall better experience when they’re out there.”

Traditionally a bastion of research for the freight rail sector to support members of the Association of American Railroads (AAR), among the areas that Stevens believes TTC could broaden its scope is rail transit.

“We certainly will have a big push to bring more transit rail into the centre,” he says. “We have a vision to modernise the site so the users of it have an overall better experience when they’re out there. We think this is positive for the industry and we will have more support from other modes of transport to get involved with their activities, which is new, but it will enable everyone to work together and combine forces to solve similar challenges.”

Ensco is similarly looking to expand the scope of TTC’s international activities. It reports engaging with organisations around the world which are pursuing the development of localised railway testing centres as well as industry suppliers that want to validate their equipment and systems at TTC for their international clients.

“Strategically we are poised to support the domestic and foreign commercial market that will benefit from the expertise that Ensco and its team members can bring,” says Mr Ruben Pena, director of government surface transportation at Ensco. “A few key areas where they seem to be of great interest is on the workforce development and homogenisation of standards.”

Responsibility for TTC falls under the remit of Ensco, Inc. The company is also active as a railway industry supplier of railway inspection technologies through its subsidiary, Ensco Rail. As Stevens explains, Ensco Rail is firewalled from the activities at TTC. “It is managed under separate leadership without involvement with the test centre,” Stevens says. He adds that Ensco’s role at TTC will not be to productise the work that takes place at the site, but to promote innovation and testing for suppliers to support service and product delivery.

“Our role will be to support the government, particularly the FRA and the railways, to conduct the research and the science needed to evolve their regulations and standards, which naturally helps to get technology into the industry,” Stevens says.

“Another thing that hasn’t changed is that this contract does not require disclosure of proprietary data, the confidentiality of all the testing and information generated by the users of the site is going to be fully protected. Both FRA and Ensco are fully committed to this. It has been a cornerstone of our business for 45 years and it will continue to be going forward.”

TTC opened as a dedicated railway research, testing and training centre in 1971. And while it has been significantly expanded and updated since then, many areas are showing their age. TTCI, which has managed the facility since 1982, only maintained the assets that it was using. However, this has changed in the new contract. Ensco is now required to preserve the entire facility to a state of good repair, an alteration that Ms Kari Gonzales, president and CEO of MxV Rail states was a concern when it was putting together what proved an unsuccessful bid to continue to manage and operate the facility.

Stevens on the other hand does not see this as an issue, describing it as part of the job.

“We have partnered with Emcor Government Services, one of the leading government facilities management companies in the US, and they are currently going through and inventorying every square inch of that site in this transition period,” he says. “They are migrating the site into a modern facilities management system that will help us to prioritise the types of maintenance that need to occur. This will also help us to plan where we want to make improvements and eliminate any operational deficiencies.”

As part of the transition, Ensco is actively recruiting the necessary specialist researchers and engineers to work at the site. A quick browse of its website reveals openings for junior, mid-level and senior railway research engineers, instrumentation technicians and engineers, rail track and vehicle maintainers, and a proposal writer.

Stevens says it has secured a litany of offers for the 100 staff required, and at this stage, he says the staffing process is going “very well.” He adds that the company has a number of staff already in or relocating to Colorado, and is benefitting from the experience of existing employees with many years of experience of working at TTC. “They have been a huge help during the transition,” he says.

Ensco won’t be inheriting MxV Rail’s staff. Stevens says all MxV research activities will conclude at TTC before October and after that date MxV will be considered a customer. “They have already requested several proposals from us to utilise the site,” he says. “But whether it is MxV or anyone else, we welcome competition, we think it is healthy for the industry.”

“As we look ahead to the next 20 years, those students are our future workforce. That is going to be important to us.”

Other key partnerships that Ensco is working on are with higher education institutions. The Center for Surface Transportation Testing and Academic Research (C-STTAR) is a network of eight universities, founded by Ensco in 2018, to provide expertise in research across all modes of surface transport in support of TTC growth initiatives. Stevens says Ensco’s government and commercial customers can tap into the expertise and resources of these universities to support research in areas ranging from automation, climate and environmental resilience to human safety and workforce development. An early success story is the award of an FRA grant to San Jose State University’s Mineta Institute to develop a climate change and extreme events training and research programme alongside Ensco and other C-STTAR members.

Ensco has also established a close link with University of Colorado-Pueblo, a C-STTAR member (see below) while Stevens adds that Ensco is planning to embed itself with middle and high schools in Pueblo. “We see a lot of opportunities to expose them to the high-tech work at the site and the rail and transportation industries,” he says. “As we look ahead to the next 20 years, those students are our future workforce. That is going to be important to us.”

The more immediate focus is the start of operations. Stevens says the emphasis now is on completing the transition, understanding the facility and being ready for it, so once Ensco does finally get the keys, it will make “100%” sure that the TTC is successful for the FRA.

The remit might have changed, but the desired outcome is very much the same: the provision of world-class transport research, testing and training facilities. The countdown to October 1 is well and truly underway.

“The federal clients and the commercial clients are expecting us to be ready and that’s our main goal,” Stevens says. “And we are on track to do it.”

Part of the Pueblo community

PENA says becoming an integral part of Pueblo’s economic and educational community was central to Ensco’s response to the RFP. He is a board member of the CSU-Pueblo Foundation and was instrumental in getting the university to sign up to C-STTAR.
With the university the only member without a state or federal transportation designation, work commenced on developing a concept for the Southern Colorado Institution of Transportation at CSU-Pueblo. Colorado governor, Mr Jared Polis, signed the bill creating the institute on May 27, which has the goal of conducting research related to the safety, security, and innovation of railroad, ground, and intermodal transportation and general issues related to surface transportation problems in the state.
“It was CSU-P and Ensco that crafted the concept, the language and moved it forward through the Colorado legislature,” Pena says.