Etihad Rail is moving construction ahead at an accelerated pace with 75% of the 1200km Phase 2 of the UAE’s national railway network now complete. Deputy executive director of projects, Mohammed Alshehi, told Robert Preston about the challenges that the company has faced. 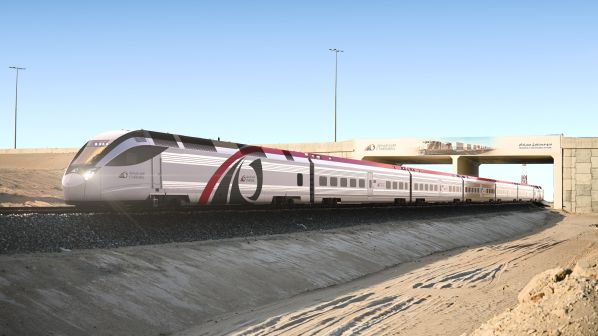 CAF will supply Etihad Rail with a fleet of diesel push-pull passenger trains.

LAST year was a busy time for Etihad Rail, the company taking forward the ambitious rail development programme of the United Arab Emirates (UAE). Having started work in January 2020 on the 1200km Phase 2 of the UAE National Rail Network, which will run from Fujairah to the border with Saudi Arabia at Ghuweifat, Etihad Rail has completed 75% of the project within only 28 months, says Mr Mohammed Alshehi, deputy executive director of projects at Etihad Rail.

“More than 27,000 workers completed construction work across 3000 sites, recording more than 130 million safe man-hours,” Alshehi says. Key milestones reached in 2022 included completing construction of the main line between Abu Dhabi and Dubai in March, with tracklaying on the main line in Sharjah and Ras Al Khaimah finished in October. “We are forging ahead with construction work at an accelerated pace to deliver the project on time and within budget,” Alshehi says.

As it works to deliver one of the largest infrastructure projects in the UAE and the wider region, Etihad Rail has faced many challenges, starting with the administrative and regulatory environment.

“One of the challenges that the company has faced during construction is the number of licences and approvals required to work across the UAE, with each individual emirate having its own set of regulations and guidelines,” Alshehi says. “Etihad Rail has successfully obtained approvals from 40,000 stakeholders, with the support of 180 entities.”

During construction itself, the major challenge is building a railway in desert conditions, with the workforce surrounded by sand dunes and subject to extreme temperatures. “We managed to mitigate the impact of the harsh environment through learning from partners and measures such as incorporating a sand filtration system in our locomotives,” Alshehi says. Another challenge was building over 400 bridges at the same time, managed by different teams which required large volumes of construction materials.

“One of the challenges that the company has faced during construction is the number of licences and approvals required to work across the UAE.”

Etihad Rail has also worked to mitigate noise and pollution during construction, carefully planning different elements of the project which combines work in remote areas with busy urban centres. “Building the railway in Fujairah also had its own set of unique construction challenges for our teams to tackle, due to the harsh topography of the Al Hajar Mountains, mixed with its incredible biodiversity,” Alsheshi says.

Innovation played a key role in tackling this challenge on the route of Phase 2 between Fujairah and Sharjah. “Our teams used powerful blasting technology to drive through the dense rock, moving 38 million tonnes of material,” Alshehi says. On the completed railway, Etihad Rail has installed a Rock Fall Detection (RFD) system to monitor the alignment in deep cuttings and to detect landslides or rock falls blocking the track. It is able to detect an obstacle with a height of 200mm or more and alerts the control centre when such an incident occurs.

“In addition, due to the Covid-19 pandemic, we faced challenges in dealing with stakeholders, suppliers and contractors, recruiting specialised capabilities,” he says. “We managed to overcome all these challenges and move forward with the construction of this strategic national project.”

Alongside innovation, Alshehi stresses the crucial role that UAE nationals have played developing the country’s rail network. “It would have never been possible to achieve what we have achieved without the efforts of our Emirati talents,” he says. “Our first priority when embarking on this project was to build a team of talented individuals to plan, construct and operate the network, and this we achieved very successfully. Etihad Rail has invested in local intellectual capital and continues to do so, following international best practice.”

Working with the Abu Dhabi Vocational Education and Training Institute (Adveti), Etihad Rail has established a three-year diploma programme for transport engineering and management, the first of its kind in the UAE. “Participants are able to specialise in one of four categories: train captain, train controller, rolling stock technician and systems technician,” Alshehi explains. The first batch of 10 students graduated in 2020 after completing their studies with work experience at the Etihad Rail depot in Al Mirfa, and a second batch has since enrolled, including four female students.

As construction of the main line progresses, Etihad Rail is working to provide the strategically-located terminals that will be key to meeting its objective of moving 60 million tonnes of freight a year, playing a vital role in providing logistics solutions that drive value for customers. “We are working to enable the easy transfer of goods from sea to train and from train to truck, to strengthen the UAE’s global status as a pivotal logistics and trading hub,” Alshehi says. Etihad Rail is developing freight terminals at key ports, including Khalifa Industrial Zone Abu Dhabi (Kizad), Ruwais, Jebel Ali, Al Ghayl and Fujairah.

Major terminals include the facility at Industrial City of Abu Dhabi (ICAD) “which is the largest inland rail freight terminal in the country,” Alshehi says. It will have capacity to handle over 20 million tonnes, and Etihad Rail completed work to connect the ICAD terminal to the UAE National Rail Network in September 2022. At Dubai Industrial City (DIC), an advanced freight terminal will cover 51.1ha and have a capacity of 5 million tonnes.

He reports that Etihad Rail has already signed commercial agreements with three of the UAE’s largest industrial producers, securing 60% of the transport capacity of the UAE national rail network. For Stevin Rock, Etihad Rail will transport 3.5 million tonnes of construction materials from its quarries in Ras Al Khaimah to Abu Dhabi with 500 train movements a year. Another future customer is Western Bainoona Group, which will send 4.5 million tonnes of aggregates by rail from Fujairah to Dubai and Abu Dhabi. Etihad Rail will also be moving steel products produced by Al Ghurair Iron & Steel (AGIS) for export through the Icad terminal to Khalifa Port in Abu Dhabi and Jebel Ali in Dubai.

More recently, Alshehi reports that Etihad Rail has signed terms for a strategic partnership with petrochemicals producer Borouge to move 1.3 million tonnes of polyolefins a year from its production facility in Al Ruways Industrial City for export.

Alongside the contracts, Etihad Rail’s freight fleet is also starting to take shape. In August 2022 the company took delivery of the first of 38 SD70 locomotives from Progress Rail and the first of 842 multi-purpose wagons that are being built by CRRC.

“Our locomotives are equipped with the latest filtering innovations such as the pulse sand filtering system, which ensures that the train operates at high effectiveness and efficiency when passing through desert regions,” Alshehi says. “They also incorporate and comply with the latest technologies and standards for reducing emissions.” The Etihad Rail locomotive fleet is equipped with ETCS Level 2 “in order to ensure safety, security and reliability, in addition to efficiency and sustainability.”

Etihad Rail has opted for diesel traction, but Alshehi says there is potential for electrification in the UAE. “Diesel traction technology is highly reliable, and given that heavy-haul freight was the first service to operate on the UAE national rail network, diesel traction is the most appropriate,” Alshehi says. He points out that in building a railway and moving traffic away from road, Etihad Rail is already contributing to a reduction in CO2 emissions. “We recently signed a memorandum of understanding with Progress Rail to discuss potential opportunities for the development and deployment of an autonomous, zero-emissions port-to-port concept in the future,” he adds.

Etihad Rail signed a Dirhams 1.99bn agreement with First Abu Dhabi Bank in February 2022 to finance passenger services, with the bank the certified lead arranger for the loan. The railway also confirmed a Dirhams 1.2bn ($US 326.7m) order with CAF in June for the supply of a fleet of push-pull diesel trains. The trains will meet European standards with a maximum speed of 200km/h, with capacity for more than 400 passengers. CAF said the base contract is worth more than €250m although neither party could confirm the number of trains included in the order.

This is not the full extent of Etihad Rail’s passenger ambitions. In September, Etihad and Oman Rail announced a partnership to form a joint venture, Oman-Etihad Rail, to design, develop and operate a railway network to connect Sohar Port in Oman with the UAE national network, backed with an investment of $US 3bn.

The 303km railway will run from the Port of Sohar on the Gulf of Oman to UAE’s national network at Abu Dhabi via Al Ain. “The network will provide both passenger and freight services, which will contribute to improving the movement of goods and passengers between the two countries,” Alshehi says, adding that passenger trains will operate at up to 200km/h, offering 1h 40min journey times between Sohar and Abu Dhabi, and 47 minutes from Sohar to Al Ain.

The board of Oman-Etihad Rail met for the for first time in October 2022, when Mr Ahmed Al Musawa Al Hashemi was appointed as CEO and Mr Mohammed bin Zahran Al Mahrouqi as deputy CEO. Speaking at the British Railway Industry Association’s annual conference in London on November 11, Al Hashemi said that interoperability requirements for the link to Oman had been agreed, including loading gauge and signalling, and that design work was underway prior to tendering.

No date has been confirmed yet for the start of construction, but expect progress here and with Phase 2 of the Eithad Rail network in 2023 as this impressive project edges closer to the start of full operation.