The European Rail Freight Association held a webinar on the priorities for rail freight beyond Covid-19 on September 15. With some rail freight operators now in a precarious position due to the sudden drop in revenue, there is a fear that a lot of the gains made could be lost, as David Briginshaw reports. 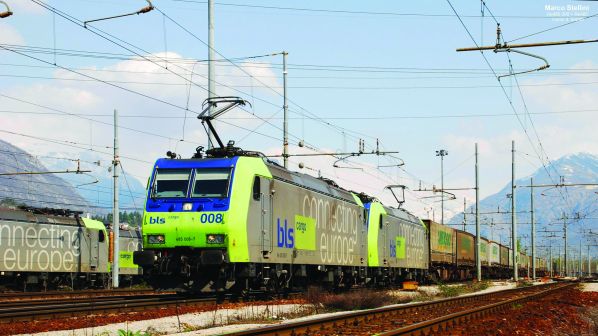 Rail freight reliability has improved in recent months due to the better performance of passenger trains.

EUROPEAN rail freight suffered a 20-30% reduction in traffic between March and June due to the coronavirus pandemic. This hit revenue, putting many of the private and independent members of the European Rail Freight Association (ERFA) at financial risk with some facing an existential threat.

As ERFA president and CEO of BLS Cargo, Mr Dirk Stahl, pointed out, many freight operators have fixed costs for locomotives and staff, which make it difficult to cut costs quickly when revenue drops. “A lot of operators face financial difficulties, so it is important that we keep the market going,” Stahl says. “Everything we gained in the last 10 years could be lost.”

There has been a slight recovery in traffic since European lockdowns ended, but traffic recovery is strongly linked to the rate of recovery of industry and the wider economy.

Stahl says ERFA is grateful for some of the measures being taken by national governments and the European Union to ease the situation. He pointed to waiving or reduction in track access charges in France and Italy, financial support for wagonload freight, recapitalisation of national companies and compensation of fixed costs for lost trains in France, Germany and Switzerland, and temporary suspension of charges in the Czech Republic, Germany, Poland, and Switzerland.

Nevertheless, Mr Geert Pauwels, CEO of Lineas, Belgium, wants to see more EU member states stepping up to the plate. “There is not really much support for rail freight nationally, there are few real pushes,” he says.
Stahl also highlighted some of the EU’s measures taken in March such as the introduction of Green Lanes to unclog border crossings and clarification on state aid. “The EU support is very helpful, but we need to discuss the next steps,” he says.

“We want the rail freight corridors to play a bigger role in investment.”

ERFA is very wary of the recapitalisation of state-owned incumbent railways, particularly German Rail (DB) and its DB Cargo subsidiary. ERFA wants such aid to be transparent and non-discriminatory. “The rules changed in a negative way,” Stahl says. “State aid was available in Germany for road hauliers and then the incumbent [DB].”

However, rail freight operators managed to improve punctuality from 60% to 80-90% during the pandemic, partly due to fewer trains operating, but mainly because passenger trains suffered fewer delays. The reduction in the number of people travelling by rail means boarding and alighting times at stations are shorter, so trains can depart on time. Stahl believes passenger trains should be rescheduled in future to take account of the actual time needed at stations so that trains can continue to depart on time.

Stahl is also worried about the planned introduction of a regular-interval timetable in Germany - the Deutschland Takt project - which he believes will reduce capacity for freight trains.

“During Covid, rail freight has been punctual and has offered a good service, but we want to find a way to perpetuate this,” says Ms Elisabeth Werner, director of land transport with the European Commission’s transport directorate, DG Move.

However, she was disappointed that despite the Green Lanes initiative, rail was unable to match the 15-minute border crossing time achieved by lorries. Werner confirmed that the EU will soon present its €670bn recovery and resilience plan to reinvigorate the European economy.

The European Parliament adopted a regulation on September 17 to provide financial relief to rail operators by allowing member states to waive and relax track access and reservation charges. The ruling is backdated to March 30 and will run until December 31 or longer if necessary. However, Werner stressed that aid must be non-discriminatory.

Werner emphasised continuing support for rail freight. “After Covid we want to pursue our goals in the Green Deal,” she says. “We need to build on rail to play a central role in this.”

Werner says two initiatives are planned soon. “We will finalise discussions on the new Shift2Rail in the autumn,” she confirms. Werner also plans a review of Europe’s rail freight corridors, the legislation for which was introduced 10 years ago. “It is a fantastic concept, but they have not performed to our expectations, especially regarding capacity,” she says. “We want the rail freight corridors to play a bigger role in investment, and we want to look at terminal capacity and links to ports to facilitate more rail freight.”

Pauwels would also like freight corridor managers to be given more power to improve freight flows. As he points out, more than 50% of European rail freight is international.

Werner added that DG Move is working on a new strategy to achieve a more resilient, smarter and sustainable system. “We cannot afford to miss the momentum we have,” she says. “We must have clear objectives to transfer more freight from road to rail and water.”

There is a general recognition that more capacity will be required to achieve the EU goal of increasing rail freight by 30% by 2030. However, there was a feeling among speakers that a lot can be achieved through innovation, standardisation, digitalisation and automation, while capital investment in infrastructure should be linked to achieving key performance indicators (KPIs).

Mr Michail Stahlhut, CEO of intermodal freight operator Hupac International, says operating longer freight trains would be a relatively easy win. “The average length of freight trains in Europe today is 500-600m, but 43% of the TEN-T network is fit for 740m-long trains,” Stahlhut says. “We could get a 30-50% increase in capacity without thinking.”

“We need a Europe-wide flow management system - this could save billions in infrastructure investment.”

Pauwels wants infrastructure managers to become more innovative and to think internationally. He praised DB Network’s recently launched Click & Ride app which can provide operators with a path up to 48 hours before it is needed, but he wants to see more innovations like this. “We need to take the step to digitalistion and automation now,” Pauwels says.

“If infrastructure managers could think about freight flows and the type of trains being operated internationally, we could make better use of capacity. We need a Europe-wide flow management system - this could save billions in infrastructure investment.”

Mr Maurizio Castelletti, head of unit for the Single European Railway Area with DG Move, wonders whether a supra-national entity would be needed to implement a Europe-wide rail freight traffic management system.
Regarding capital investment, Castelletti says “we need to decide a few priorities and only invest in them.”

Pauwels believes infrastructure funding should be linked to achieving KPIs to “change the mindset of infrastructure managers” and encourage adoption of new technology. He would also like to see an end of funding for Class B signalling systems to encourage a more rapid switch to ERTMS.

Finally, both Pauwels and Stahlhut want a quick resolution of some national differences which hamper the flow of cross-border rail freight such as language and tail lights on trains. “We have to sort out the tail light nonsense where there are different rules in different countries,” Stahlhut says.

“We have been discussing tail lights on trains for more than 20 years, which is a disgrace,” Pauwels adds.

There is clearly no shortage of ideas of how to make better use of capacity and increase standardisation, the challenge is implementing them. Perhaps the Covid-19 crisis will give more impetus to change.